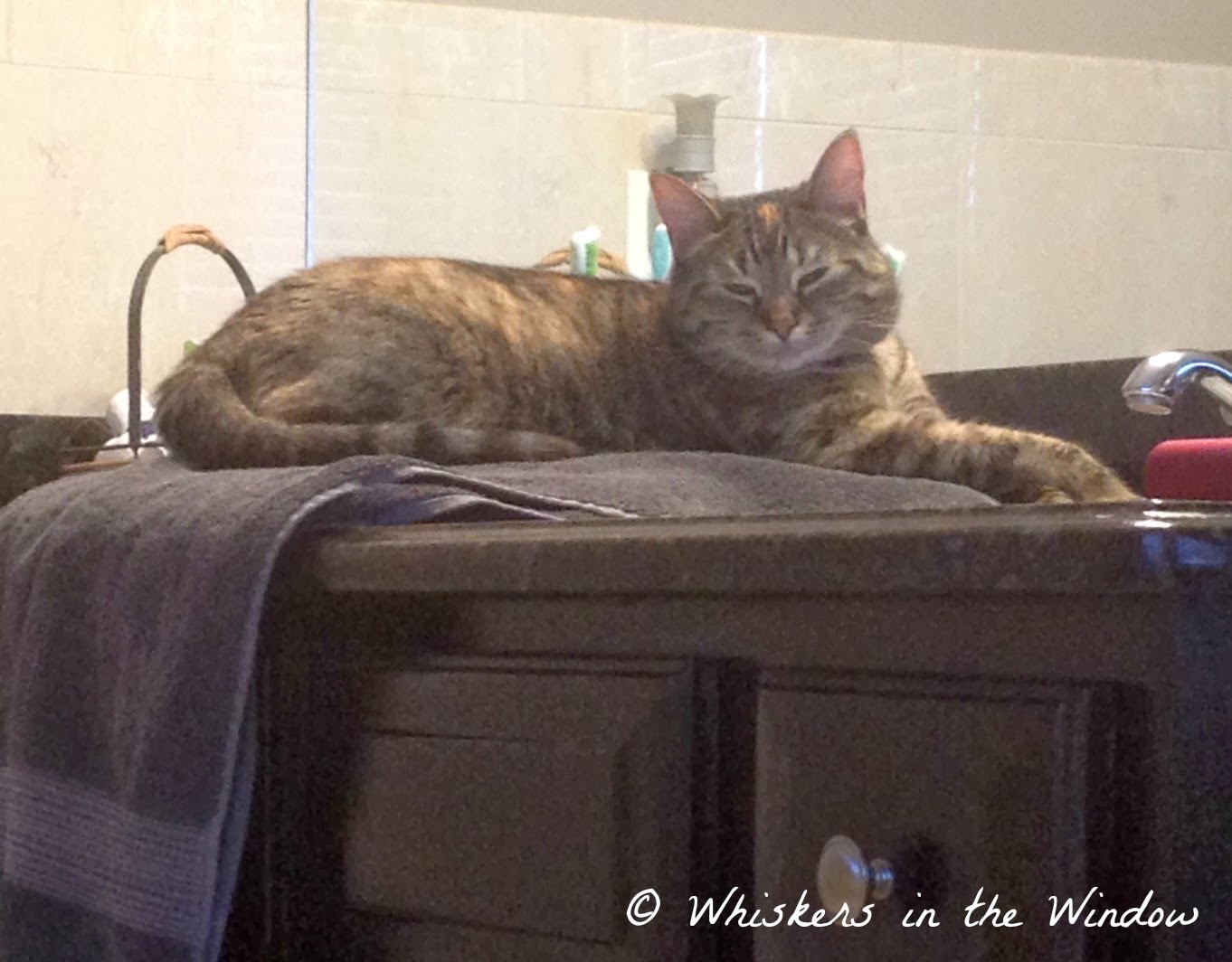 Who needs an ugly metal towel warmer in their bathroom when they have a Ruby Roo? 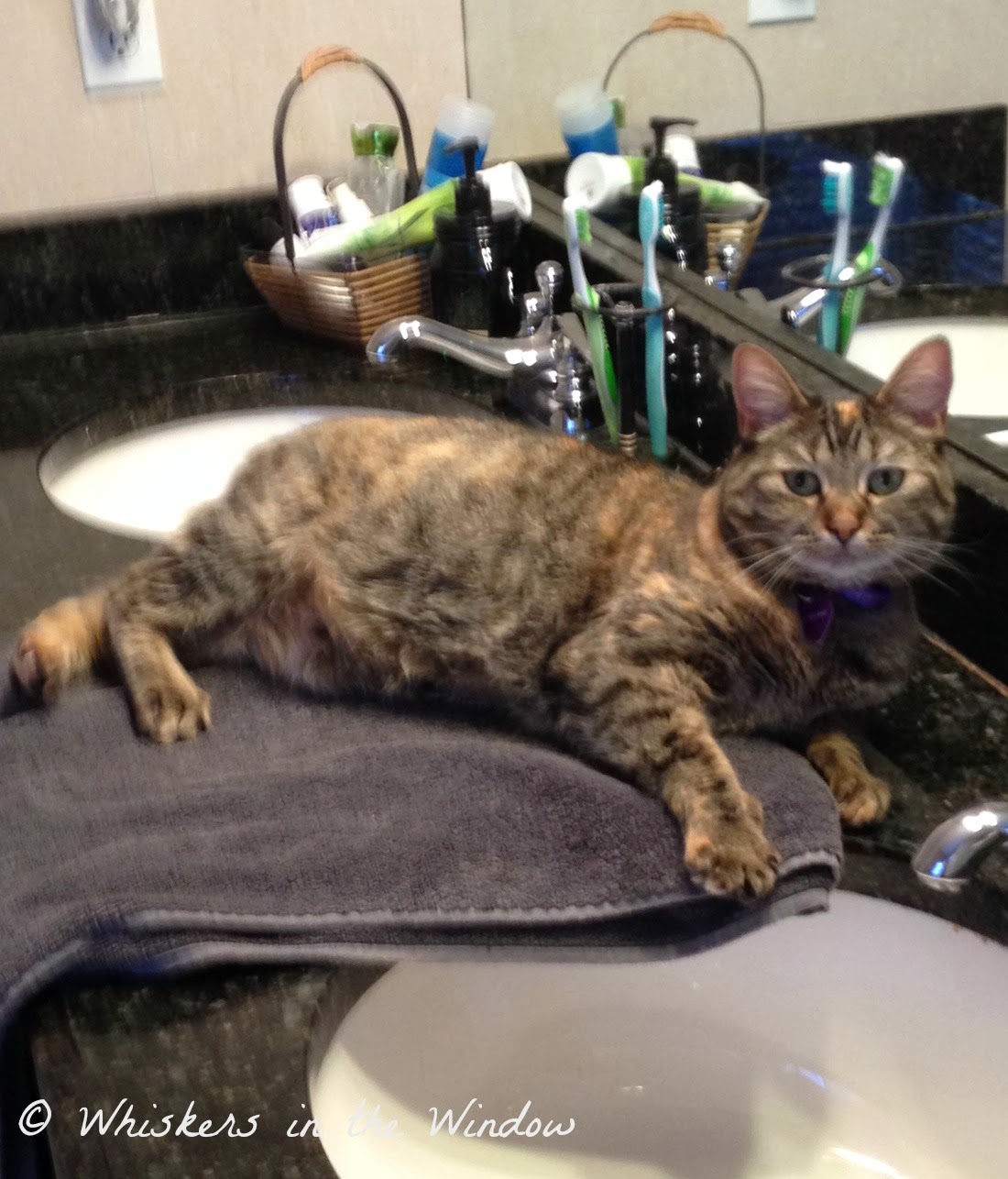 "Lady, you know you're showing your bathroom clutter to the entire world. Don't you?" 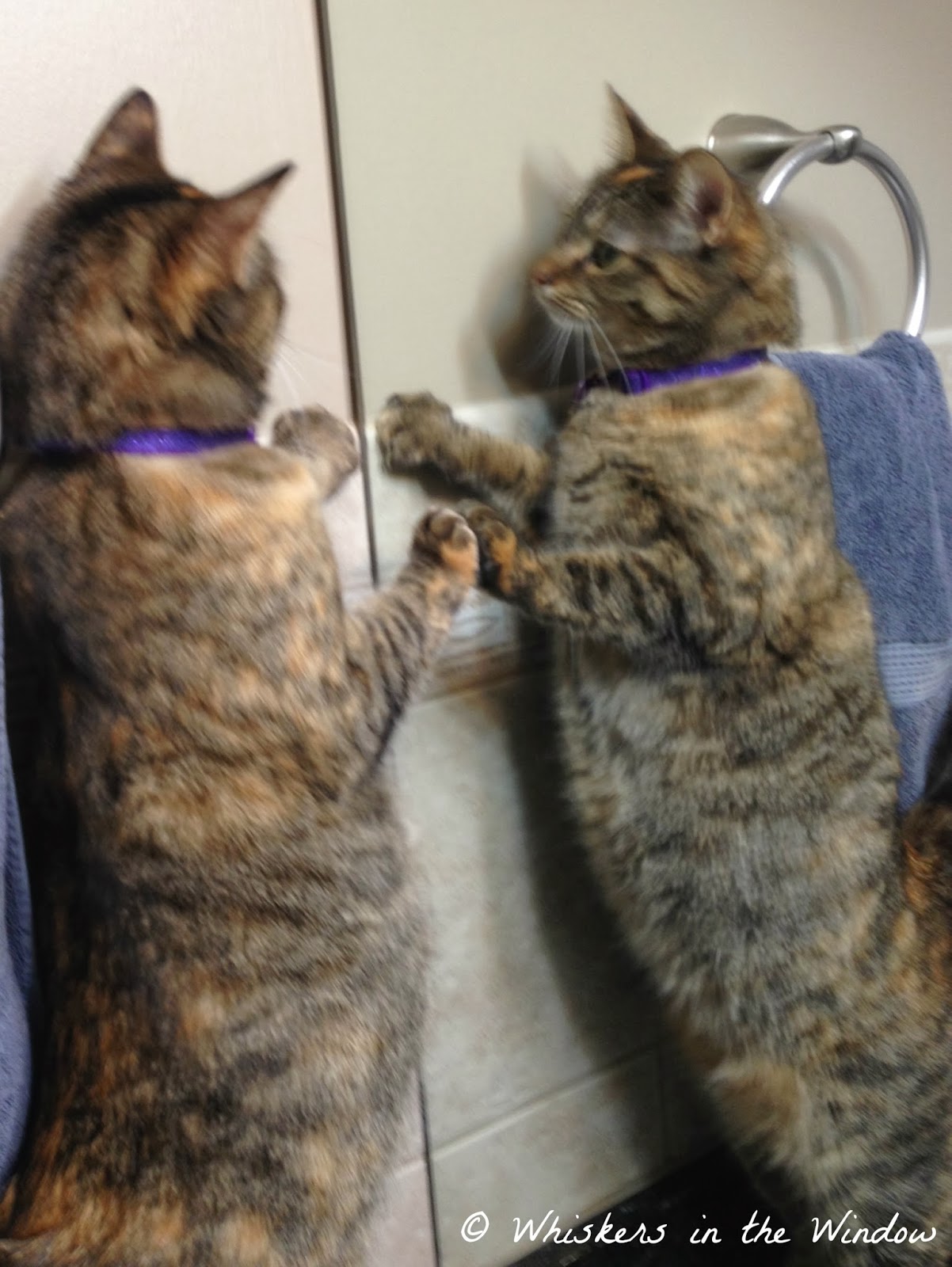 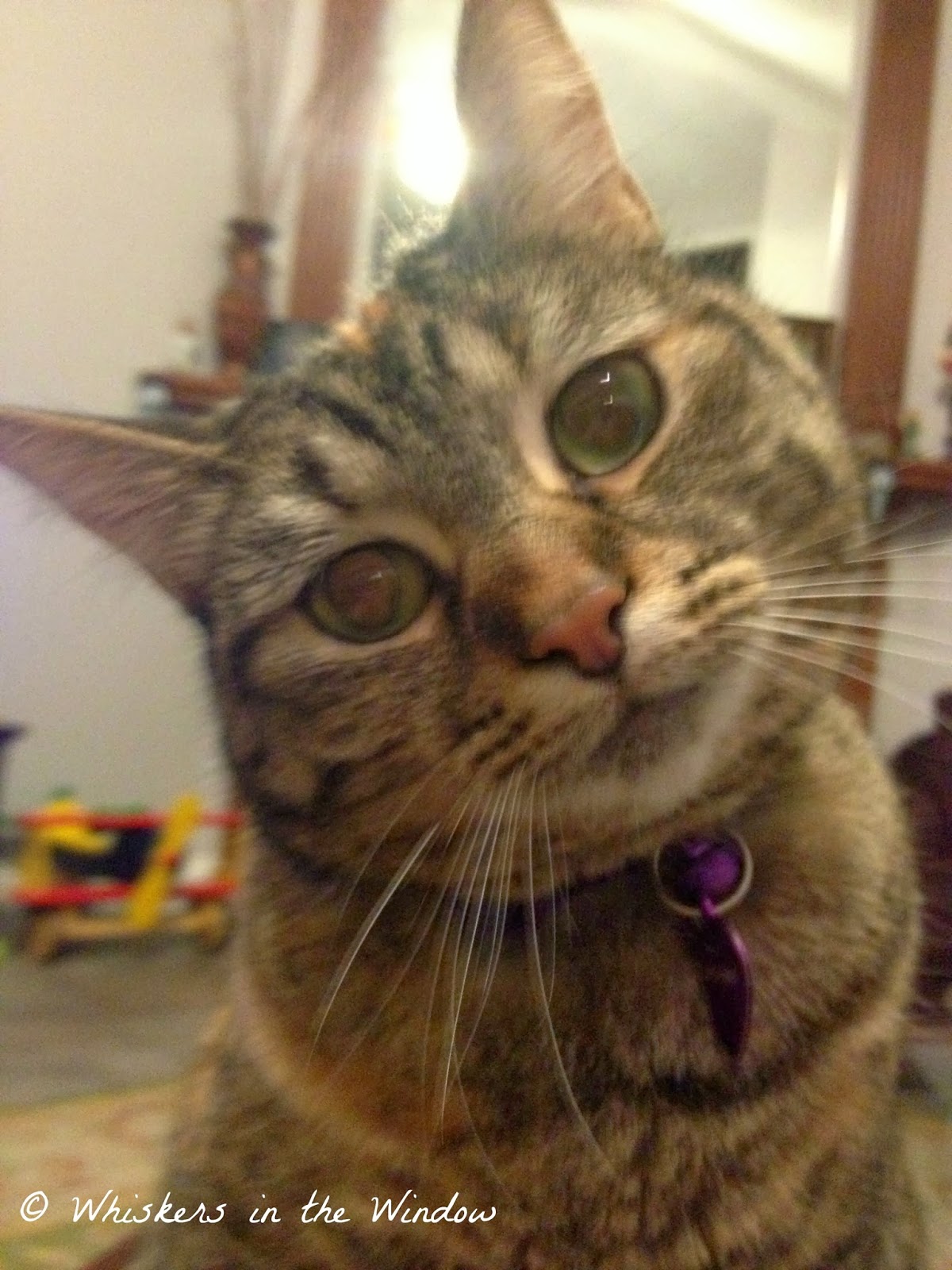 Email ThisBlogThis!Share to TwitterShare to FacebookShare to Pinterest
Labels: Ruby

For those of you who are not on Facebook, we have been receiving Emmy (Mae) updates throughout the weekend. 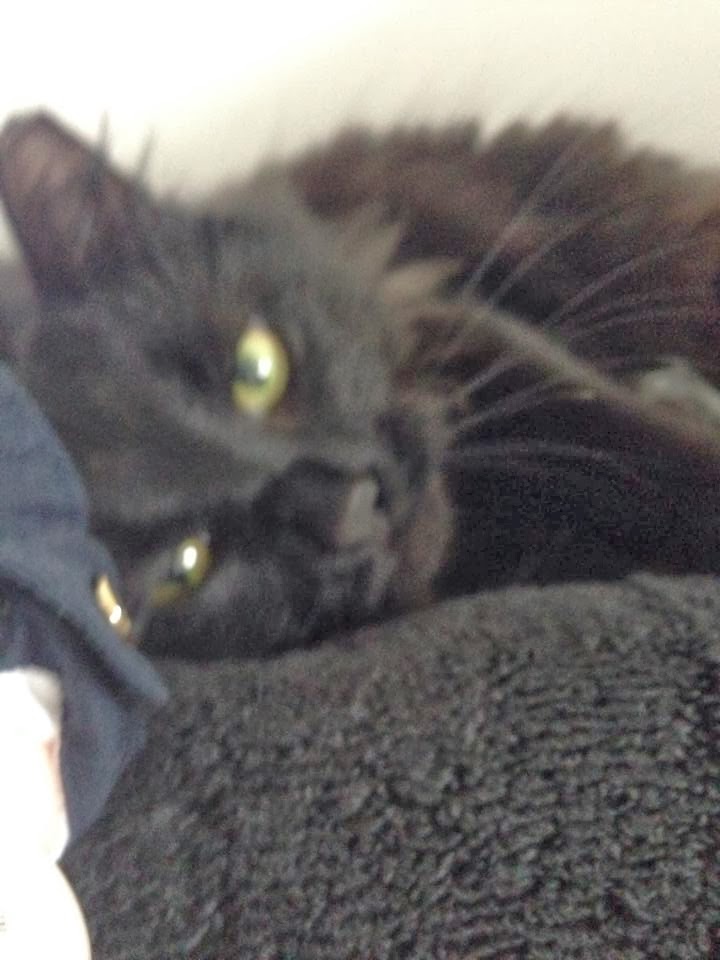 "I'm just hanging out with my Mom, making biscuits, watching The West Wing on Netflix."

And in the comments under the photo: "Shortly after this photo, she moved over to the cat tree in front of the window, took a bath, stood on her hind legs to get a closer look at some bug friends on the other side of the window and kept watch on the goings on out front." 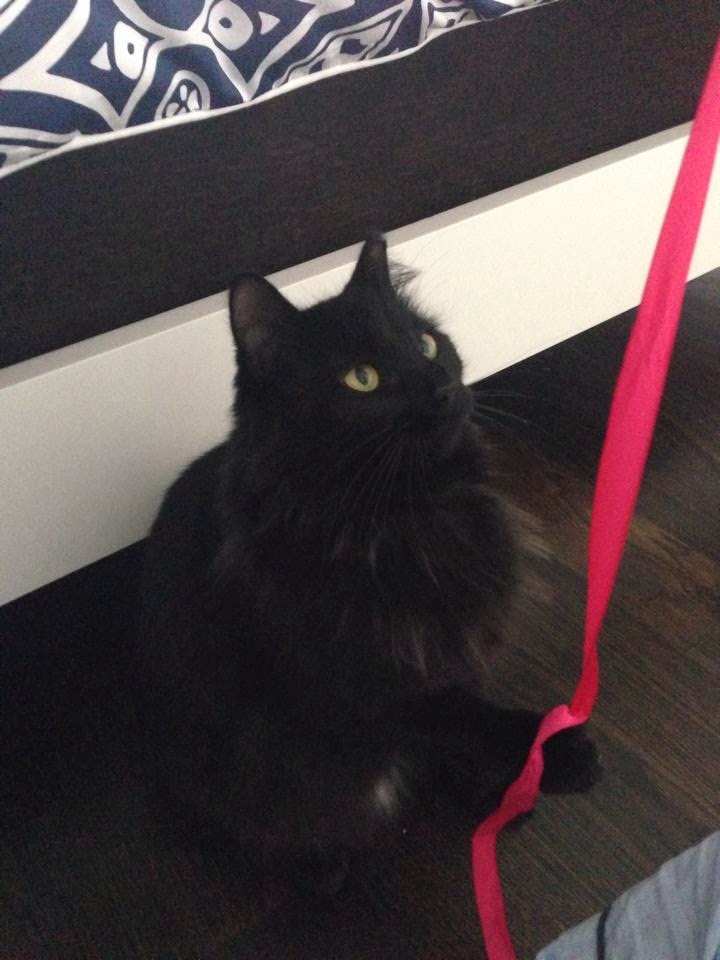 "This ribbon is really fun!!"

And again from the comments: "Girlfriend was chilling on the cat perch in the window when I came home from the market. She's definitely feeling comfortable in her room. I think she knows she's home."

Additional updates from an alumnus not named Emmy: 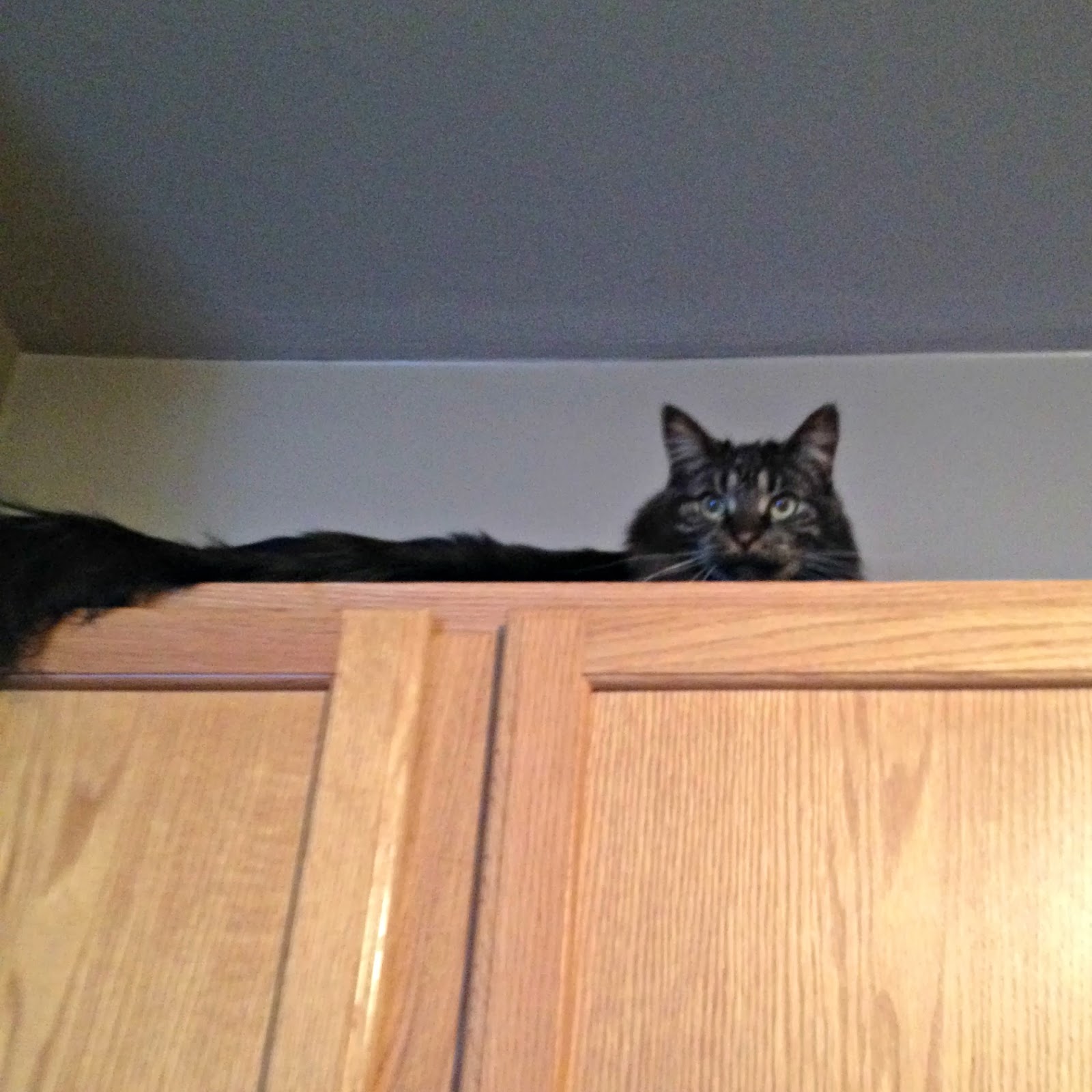 It seems that someone has discovered the top of the kitchen cabinets at his house. 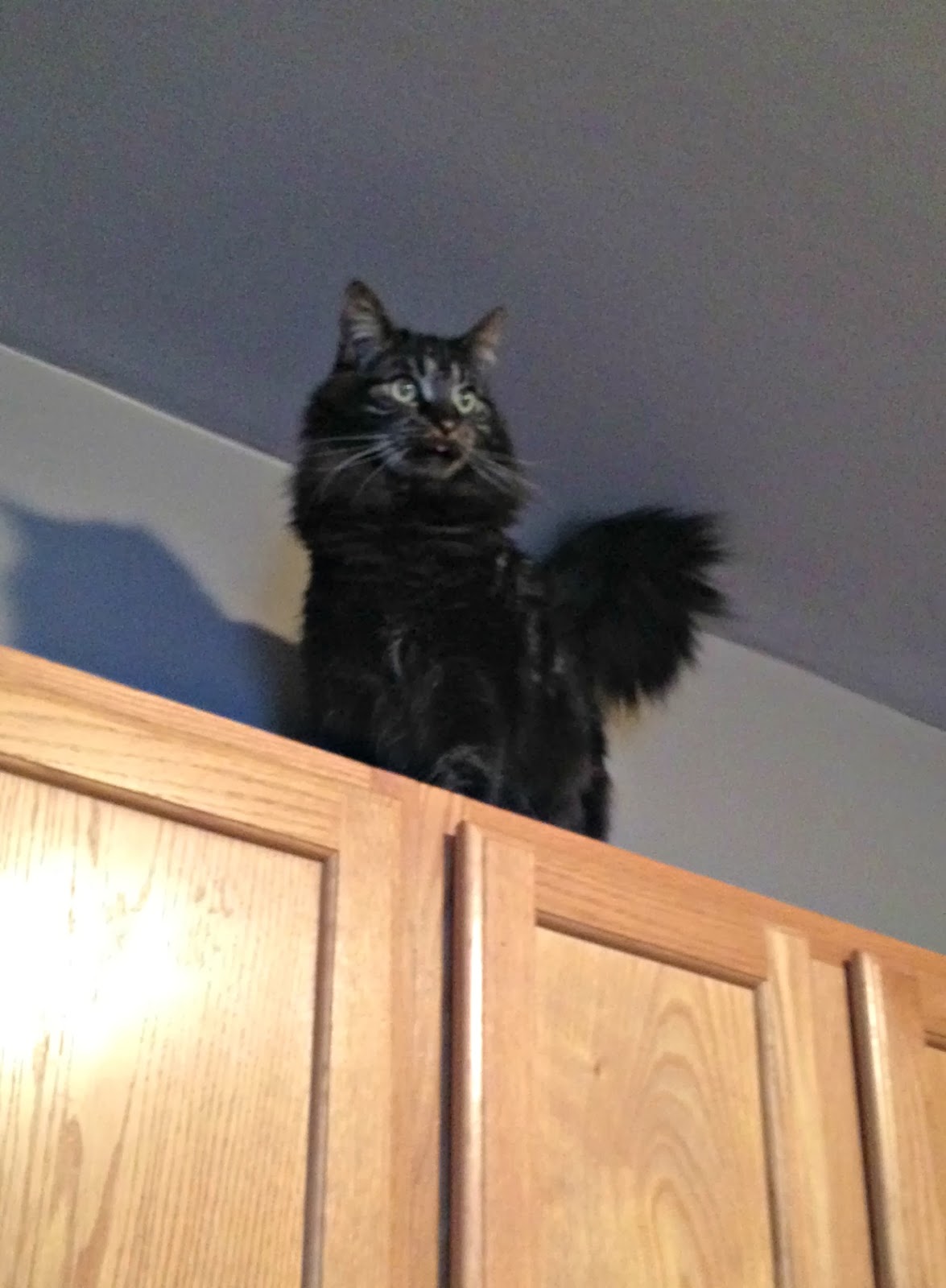 Get a load of that tail! 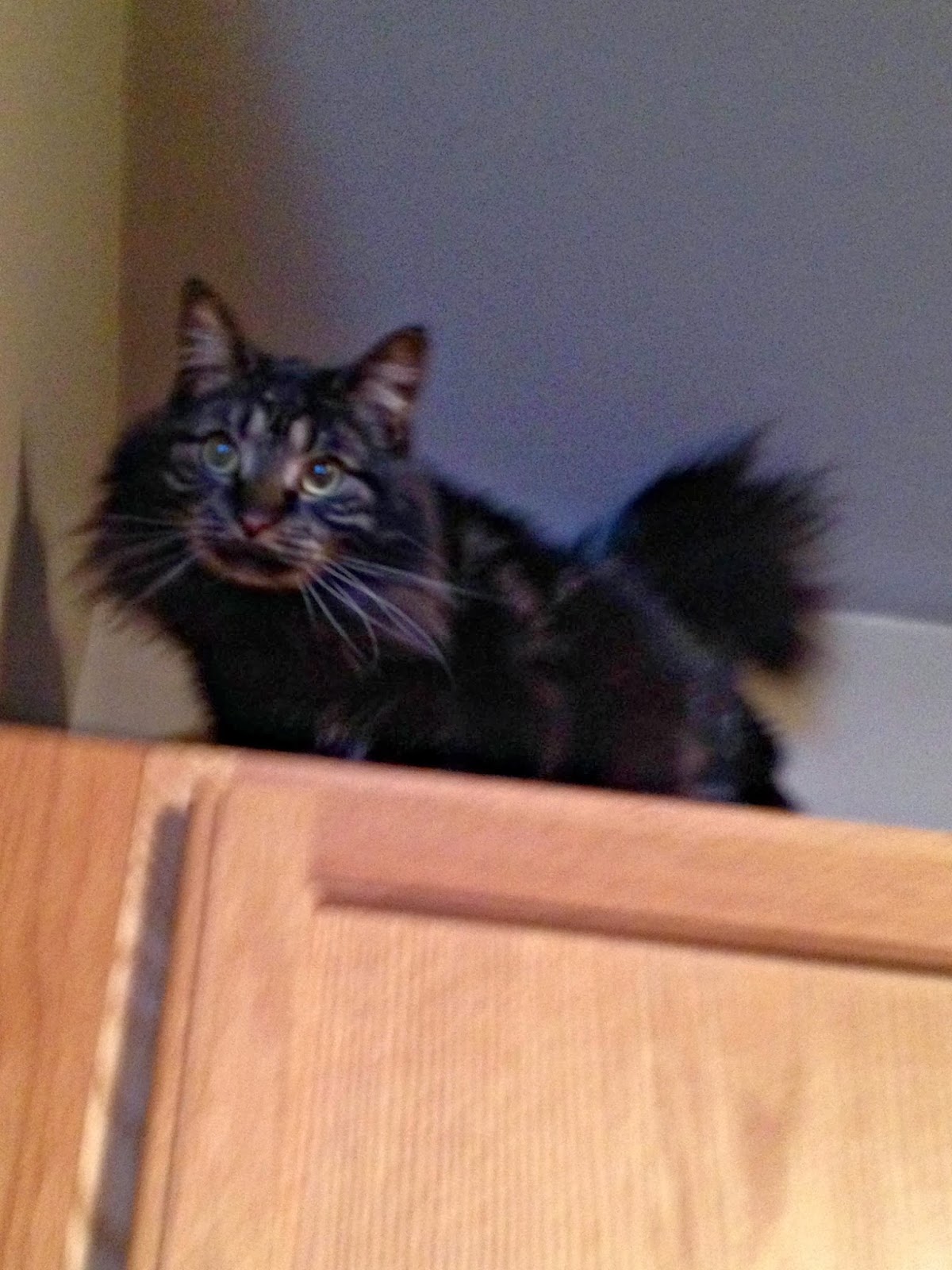 I guess it's only fitting that our boy Grizzly found his way up to the highest place in the kitchen. 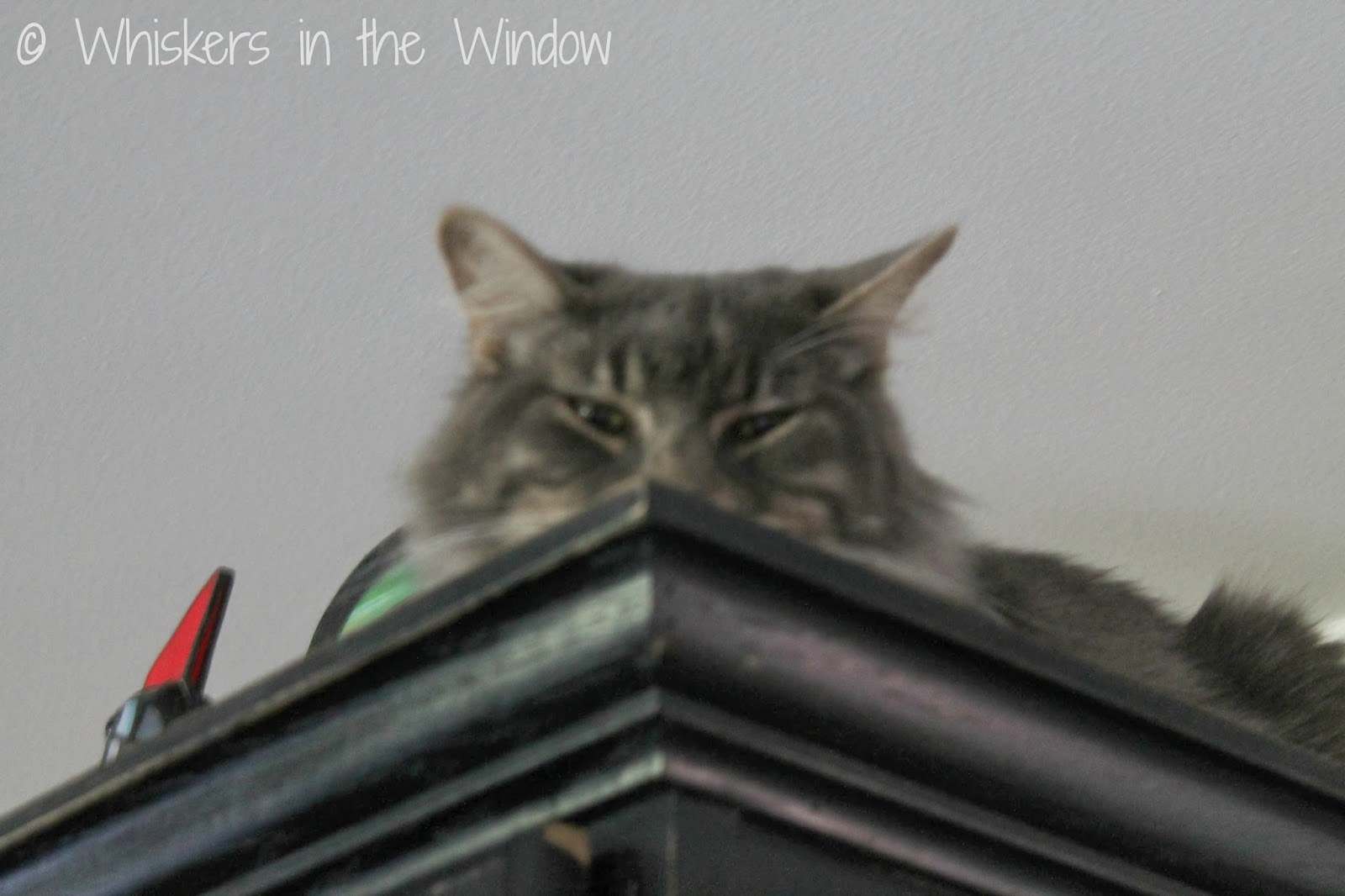 His mama was pretty fond of the view from on top of my cabinets too.

Happy Tails to You

Mae's Friday began like any other Friday. She woke up, stretched, and washed herself a bit. She moseyed over to the foster room door and watched patiently through the glass as I let Chuckles out the back door, greeted all the kitties, and served up breakfast. She chatted with me over her own breakfast, rubbed up against my legs, and supervised the scooping of Ye Olde Litter Boxe. In short, nothing spectacular. "Yawn... Just another random wintry day. I'll just tuck in here and wait it out."


And nothing could have been further from the truth.

You see, there were weeks of planning that went into making Friday an extra-special, over-the-top, fantabulously super day of days for our sweet Mae.

By 8:15 am, she realized change was in the air. The carrier had come out and I had come in to grab a fleece blanket out of her room. By 8:20 am, she had parked herself under the sofa in her room just in case transportation had been arranged in her honor. By 8:30 am, I had unceremoniously dragged her out and plopped her complaining self inside. By 8:35 am, we were pulling out of the driveway and heading towards the interstate.

I imagine she thought we were heading back to the vet. That's the only place I ever took her before. While the vet isn't exactly enjoyable, it hasn't been a bad experience for her so she just sat in the carrier and chatted amiably with me as I drove... and then I drove for much longer than necessary to reach the vet. Mae kept chatting politely to pass the time, but I could tell she was wondering what was up. Especially when I pulled into the parking lot at a large suburban mall and a friend hopped in the backseat. 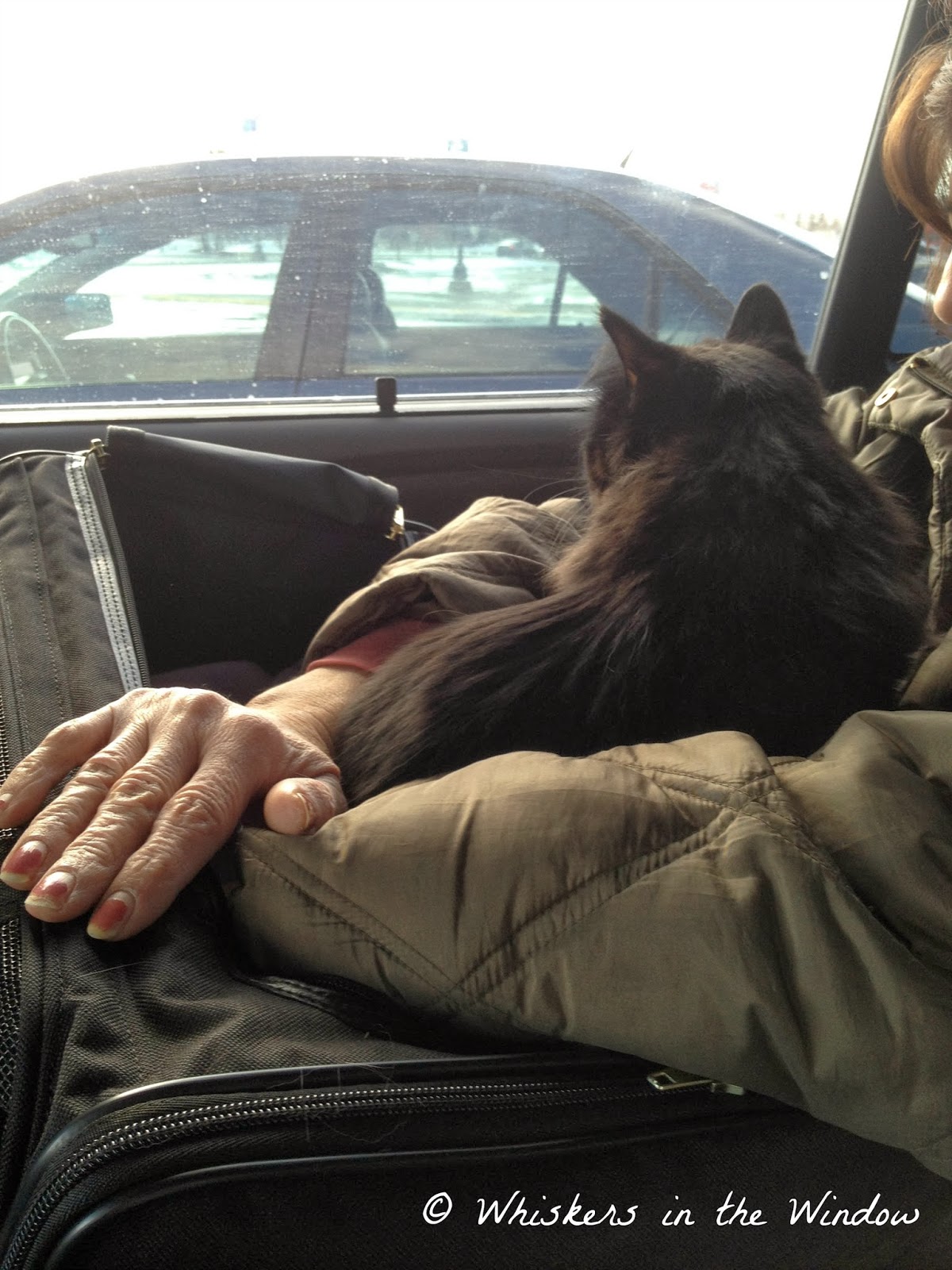 The Kitten Catcher had climbed inside the car to give Mae kisses and hugs. She brought a new carrier for Mae to test. Our sweet Mama Kitty spent several minutes inside of it, watching cars drive by in the parking lot while she purred and hugged and snuggled up close. 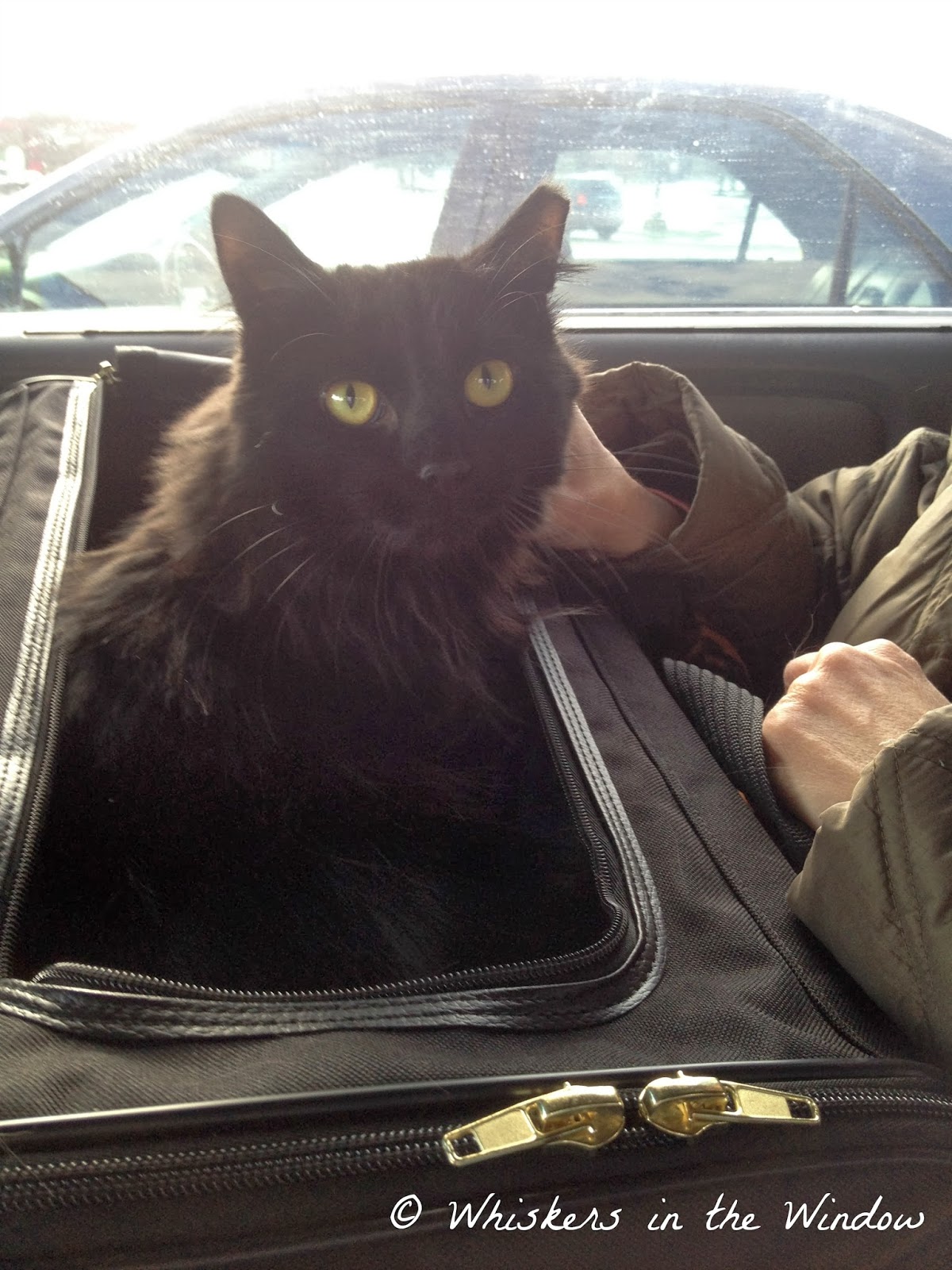 I bored her by doing nothing new... calling her name while snapping photos of her. I surprised her with the words "Goodbye" and "Be Good" and "Happy Life". And then she was unceremoniously stuffed down into the new carrier and zipped up tight for the next leg of her journey (or at least we thought she was zipped up tight).

Before I pulled away, I looked over into the Kitten Catcher's car to see Mae climbing all over her. Apparently a couple of fingers stuck through the zipper to pet her was just the leverage she needed. Maisy Mae had the strength to push her way through the opening and out to freedom. Thankfully, I had my box-o-supplies for my business along for the ride, which includes a box of temporary keychains. The wire loops for two of these were engaged as zipper locks and off they went on the next leg of the adventure. 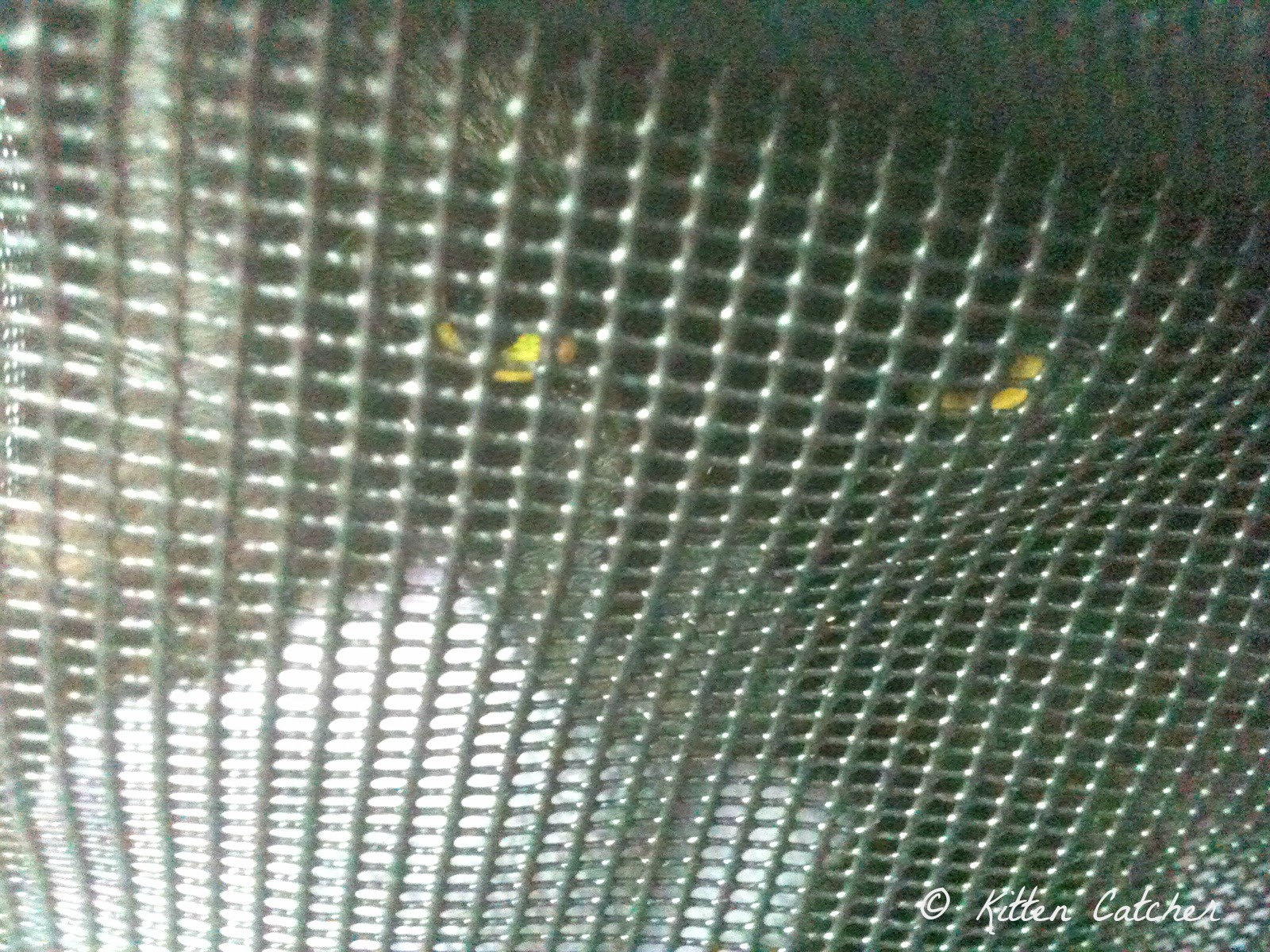 "Seriously... Mae is having no fun in here, guys!"

Mae's complaints went unheeded and eventually subsided as she traveled up the interstate to Flint, where she met our very own Teughcats in the parking lot of a local McDonald's restaurant, changed cars (AGAIN!), and continued her course north to the airport. This is probably the place where I should get into the idea of why Mae was travelling north to go south. You see, Mae wasn't taking just any old transportation route. THOSE routes, which might include cars, trains, and commercial planes flying out of DTW (Detroit airport, for the uninitiated), are okay for most of us. But definitely not for the internet sensation that Mae had become. Mae, our very special Mae, had snagged herself a ride on a company shuttle jet flying out of Midland (the mid-Michigan airport that serves Bay City, Saginaw, and Midland also has a special hangar reserved for one of Michigan's largest companies... a company that employs our very special Teughcats).

This is also probably the place where I mention that most of yesterday's events came about specifically because Teughcats (Pat) leapt into action when I first posted about getting Mae to Houston. She began networking to get permission for Mae to ride that shuttle flight that travels round trip between Michigan and Lake Jackson, Texas five days per week. Once permission was obtained, she found co-workers willing to escort a sweet mama cat on board. She found not one, but three people willing to take her just in case weather or other issues hampered our ability to send her out yesterday. She was the intermediary between us and the airport, AND she drove Mama Mae to the airport to see her off. While Mae would have gotten to Houston one way or another, Pat's hard work got her there simply, quickly, and pretty much free for us. When she told me later that being part of the transport made her day, I can't help but think that all of her help made my YEAR. We've got lots of live up to now, and it's only February! :) 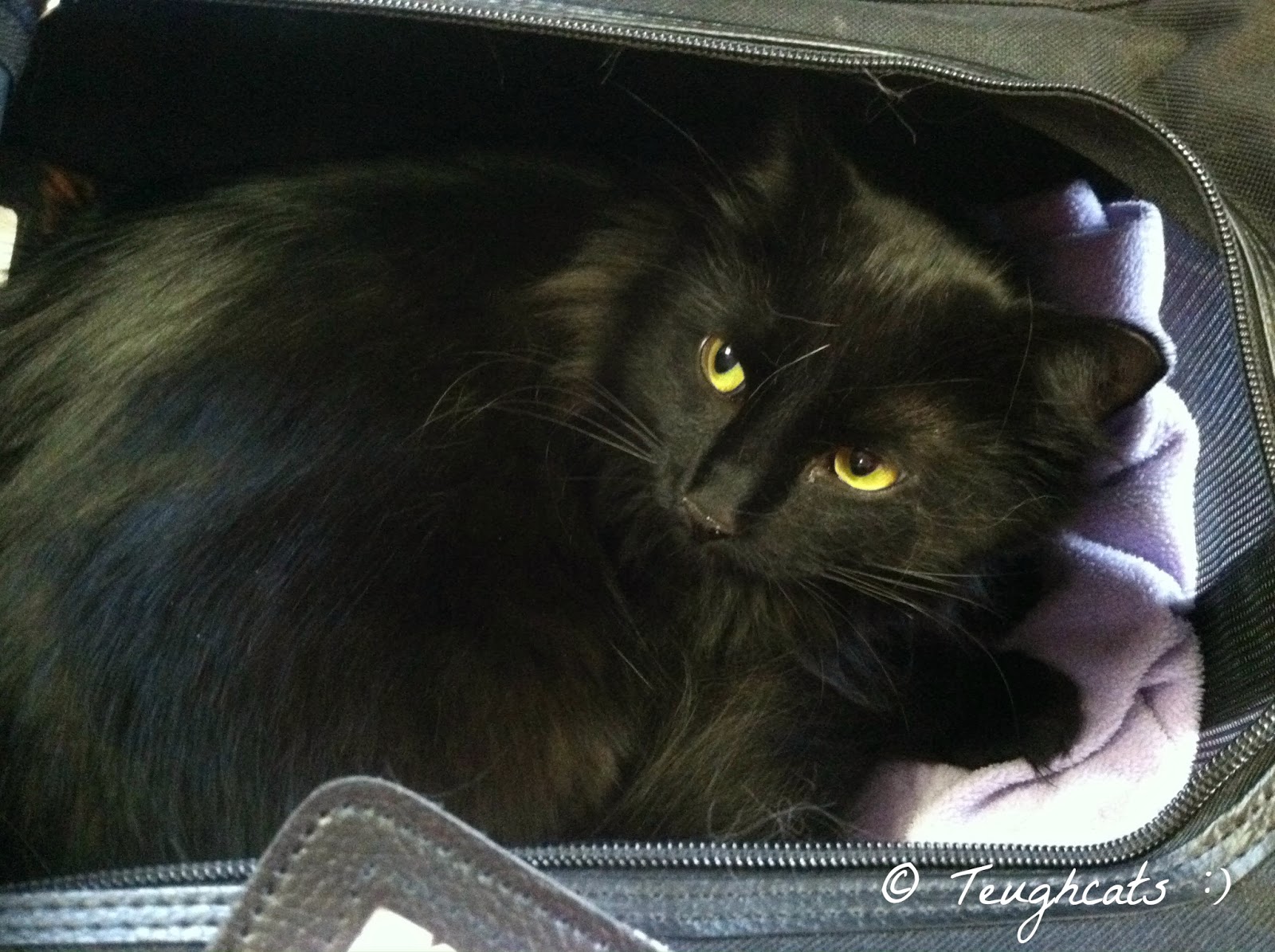 After arriving at the airport, Mae met Chelsea... the lady who would accompany her on board for her 2 hour flight home. I have yet to hear a report of her behavior while the plane was in flight. I only hope she didn't split anyone's eardrums with her howling. Although knowing Mae the way I do, I imagine she only had complimentary things to say in her quiet and usual way... or not.

Michigan was in the tail end of the storm that I have been since told is called (no lie) a Texas Hooker. Well, Mama Mae (or All-the-Way Mae) found herself waiting out the winds of this Texas Hooker in a short delay before takeoff. Once in Texas, she found herself packed into ANOTHER car heading north from Lake Jackson towards Houston.

It was in Alvin, Texas that she finally met her forever mom. Sounds as if she was thrilled to do so, considering she had to be scruffed and pulled out from under the backseat of a rental car to meet her. Stuffed back into the confines of her carrier, she made the rest of the journey home. HOME! 6 travel legs, five cars, four honorary aunties and a mom came together to bring Mae home and give her a new name, Emmy. The next set of text messages sealed the deal... 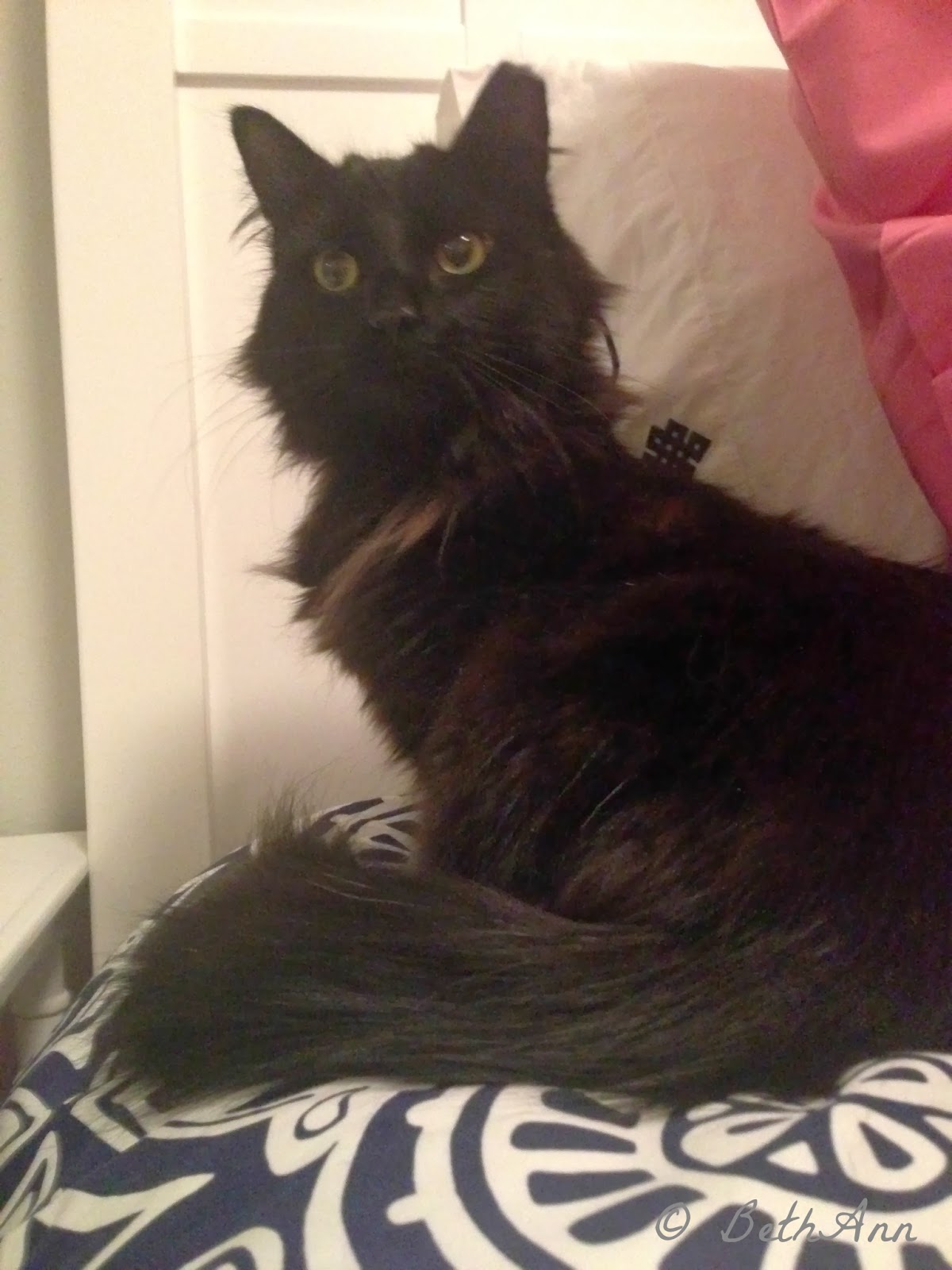 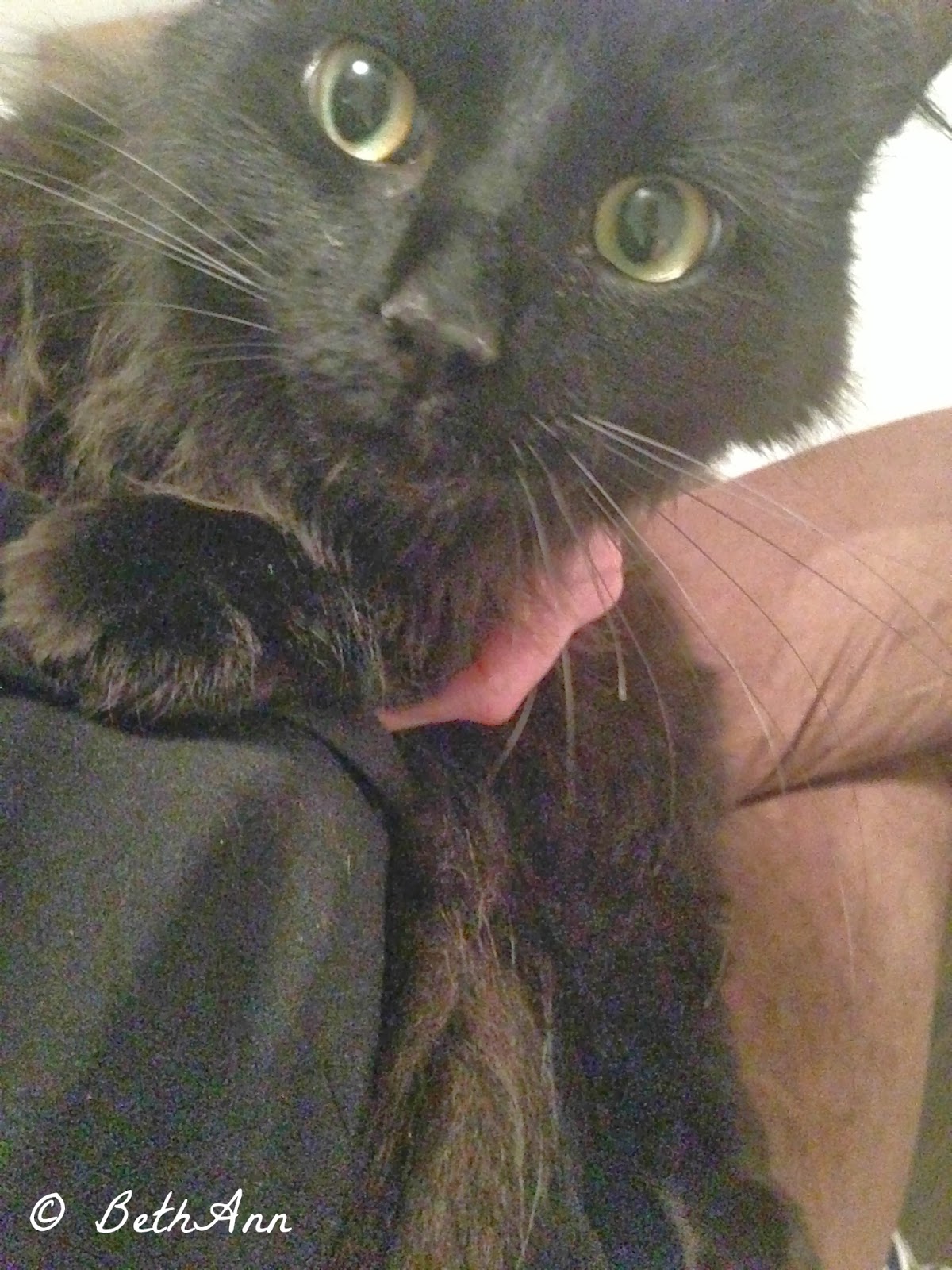 I knew from the beginning that Mae, now Emmy, was going to the right place, but this was the moment when my eyes started leaking for the sheer joy of it. And if that wasn't enough? This update came in on Saturday morning:

"I checked on Emmy when I got up. She had eaten, used her litter box and toys were in different places. She was under the bed. I laid on the floor, talking softly to her and she said a few meeps back. Then she started walking towards me.

When she first peeked her head out from under the bed, I reached out to pet her and she cowered and backed away back under the bed. I can't blame her since just yesterday I was petting her under the back seat of a car and then pulled her out by the scruff of her neck. But then she couldn't help herself and came right back out, softly purring, sniffed my entire head then spent the next 5 minutes rubbing her entire face all over my face. Then she pushed her way under my head to get to the food dish on the other side of me. She is just too sweet!

She'll have another bit of disruption later this morning when the shutters get installed in that room but then I plan on taking a nap with her this afternoon."

Could this get any better? Emmy the wayward mama cat has a new home with a mama that loves her. She has an older sister named Coco, who is showing interest in meeting her underneath the bedroom door. But most importantly, the sweetest feral cat ever (who was born on the streets of St. Clair Shores Michigan, gave birth to a litter of kittens sometime around the age of six months old, and seemingly had every odd stacked against her) found forever.

We'll just have to wait and see if the next chapter can top this one ;)

Email ThisBlogThis!Share to TwitterShare to FacebookShare to Pinterest
Labels: Mae

Come and knock on Mae's door.

She's been waiting for you. 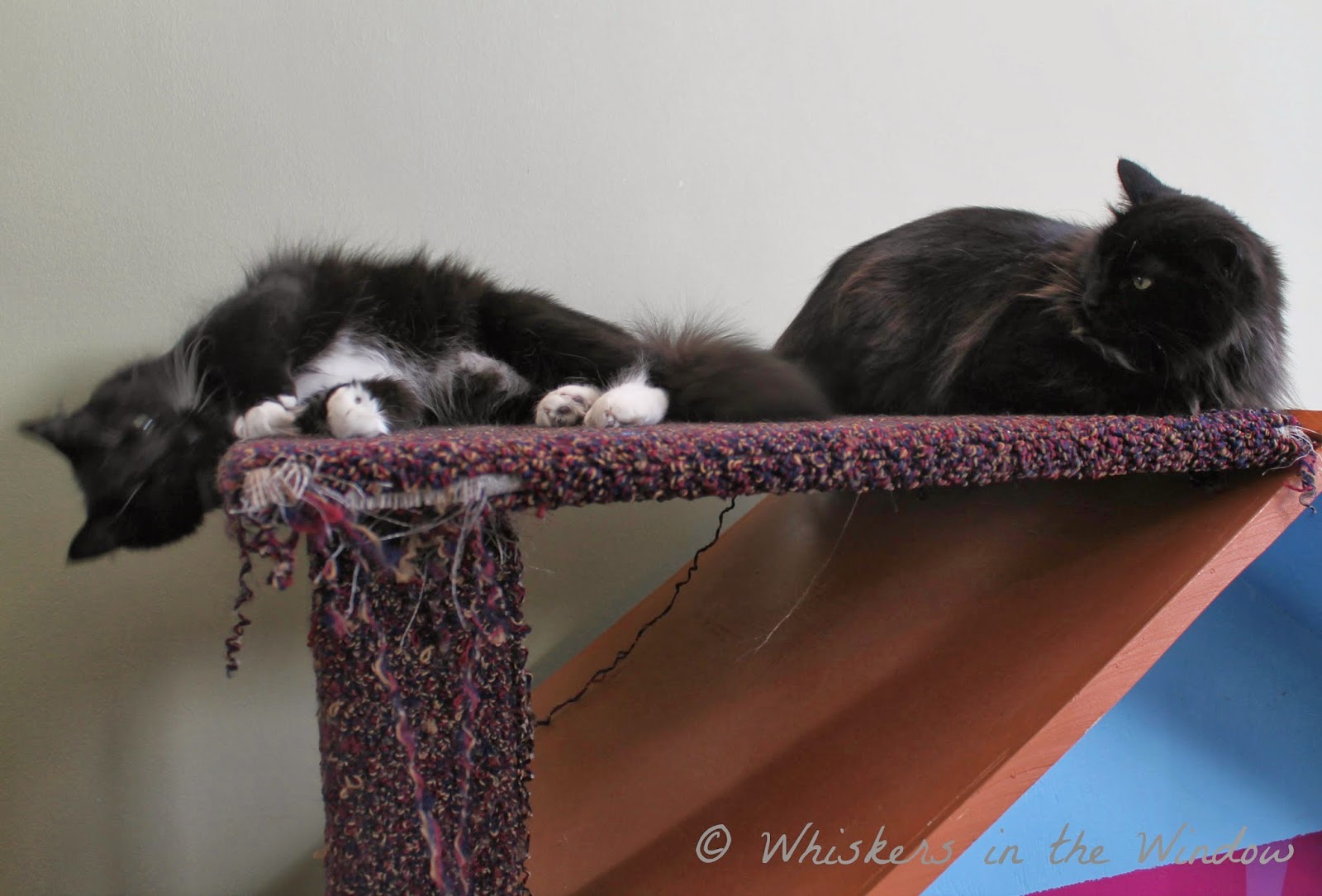 She's got a loveable space that needs Max face. 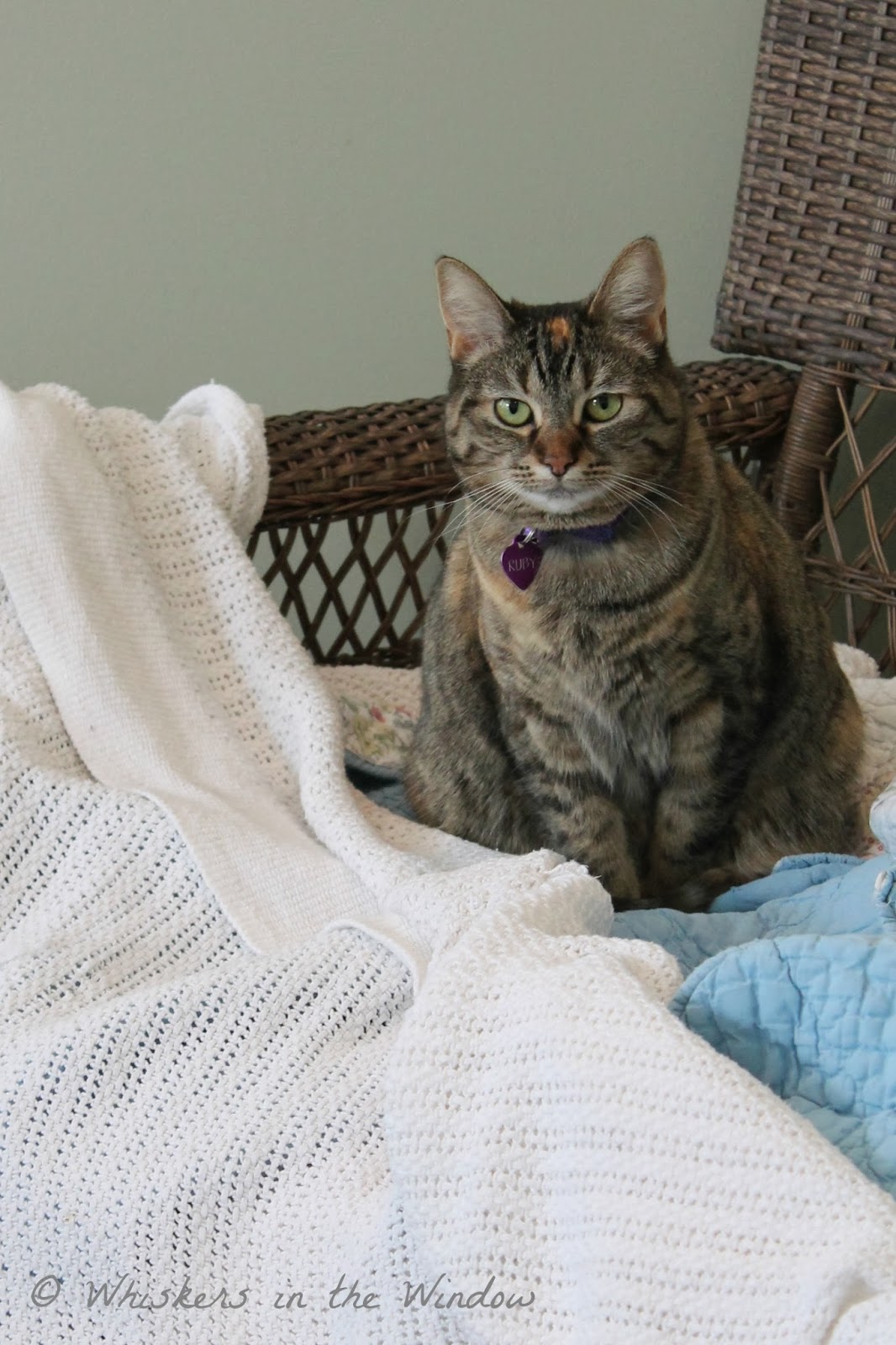 Three is company too.

Max and Ruby are very jealous that Mae has a special spot all to herself. They spend the day knocking on the door, trying to play with her through the glass, and shooting between my legs every time I try to go in or out. So... Mae gets company every day for a few hours, which seems to make everyone happy. 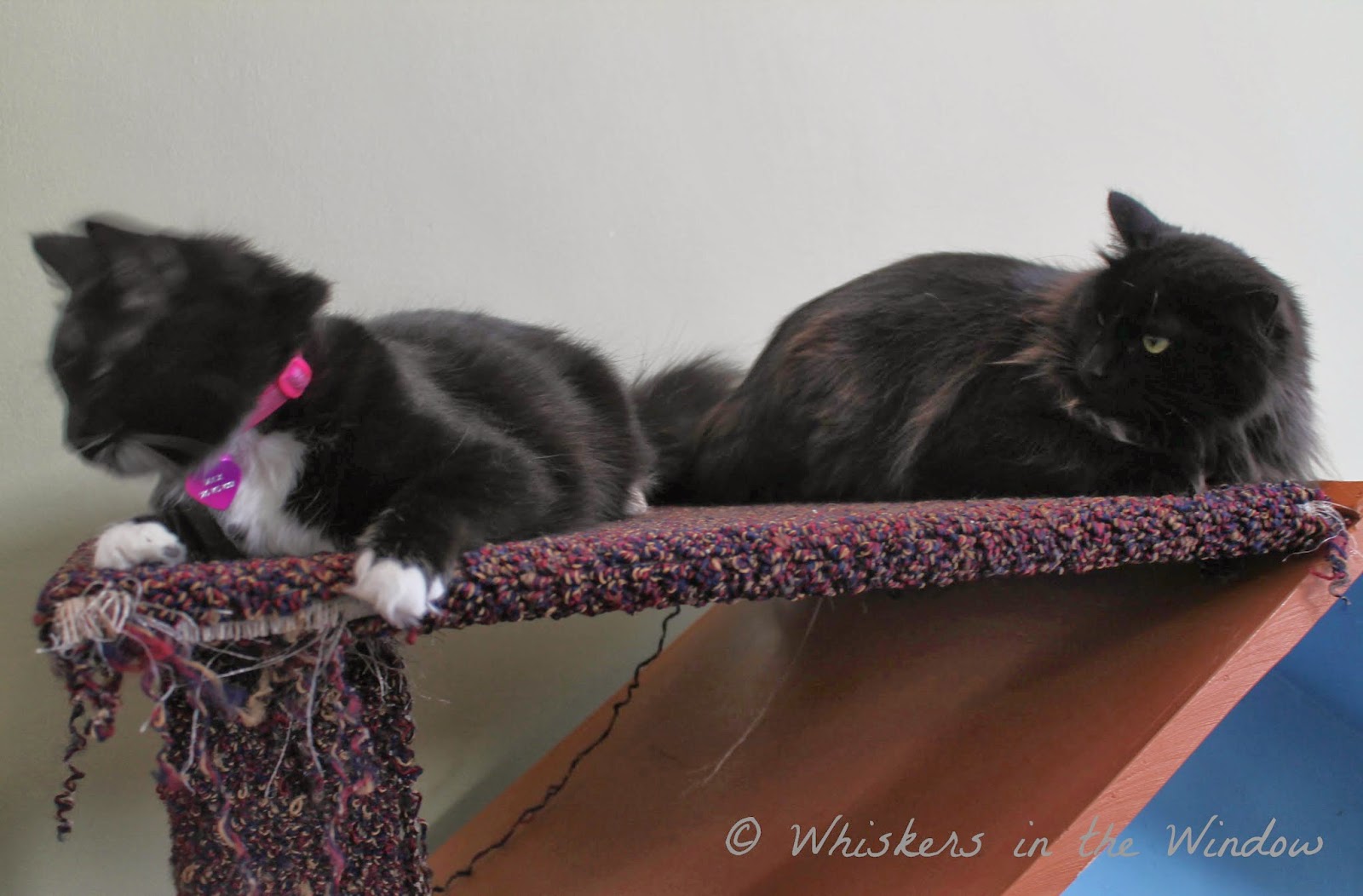 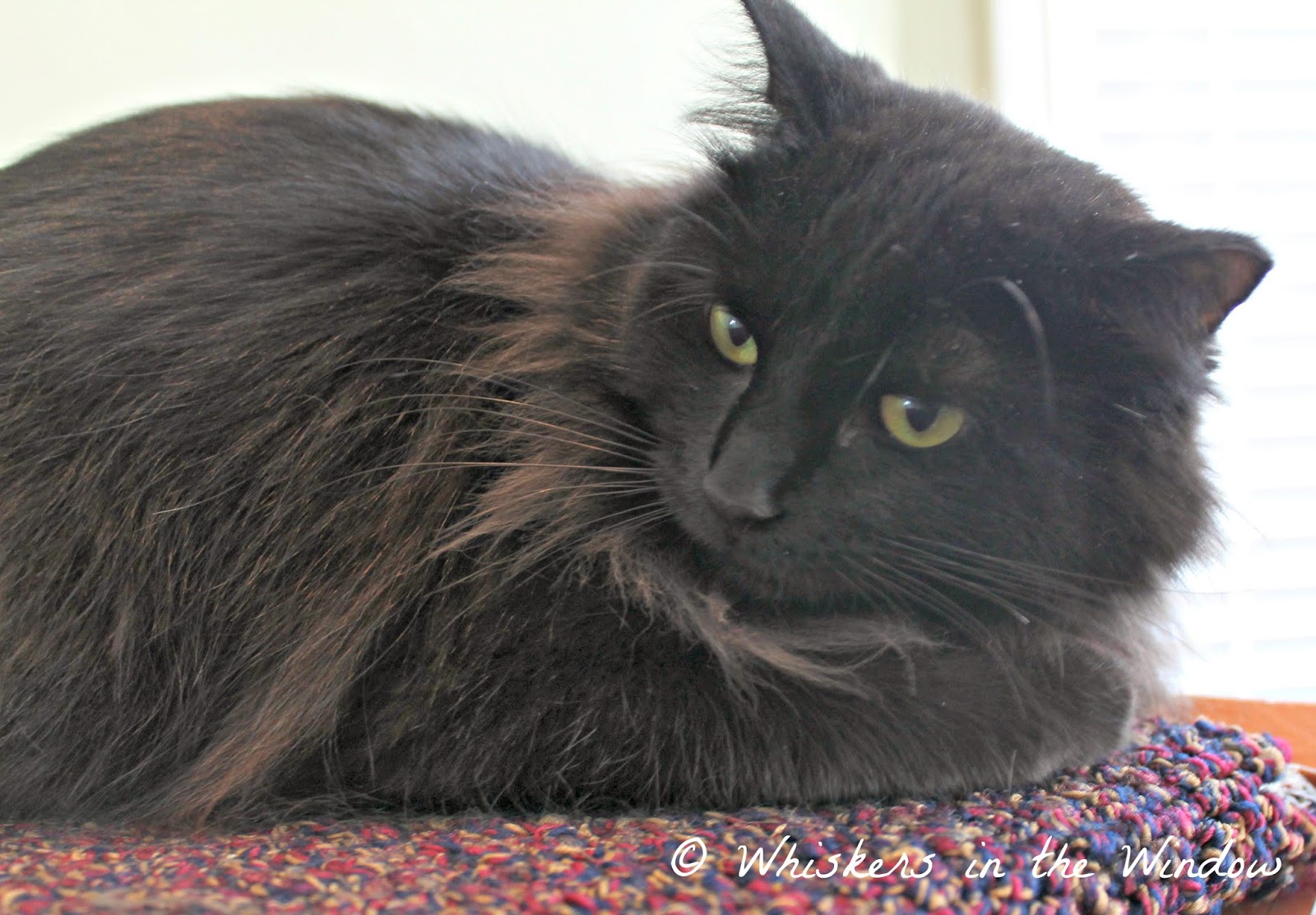 "What is that small one doing up here with Mae?" 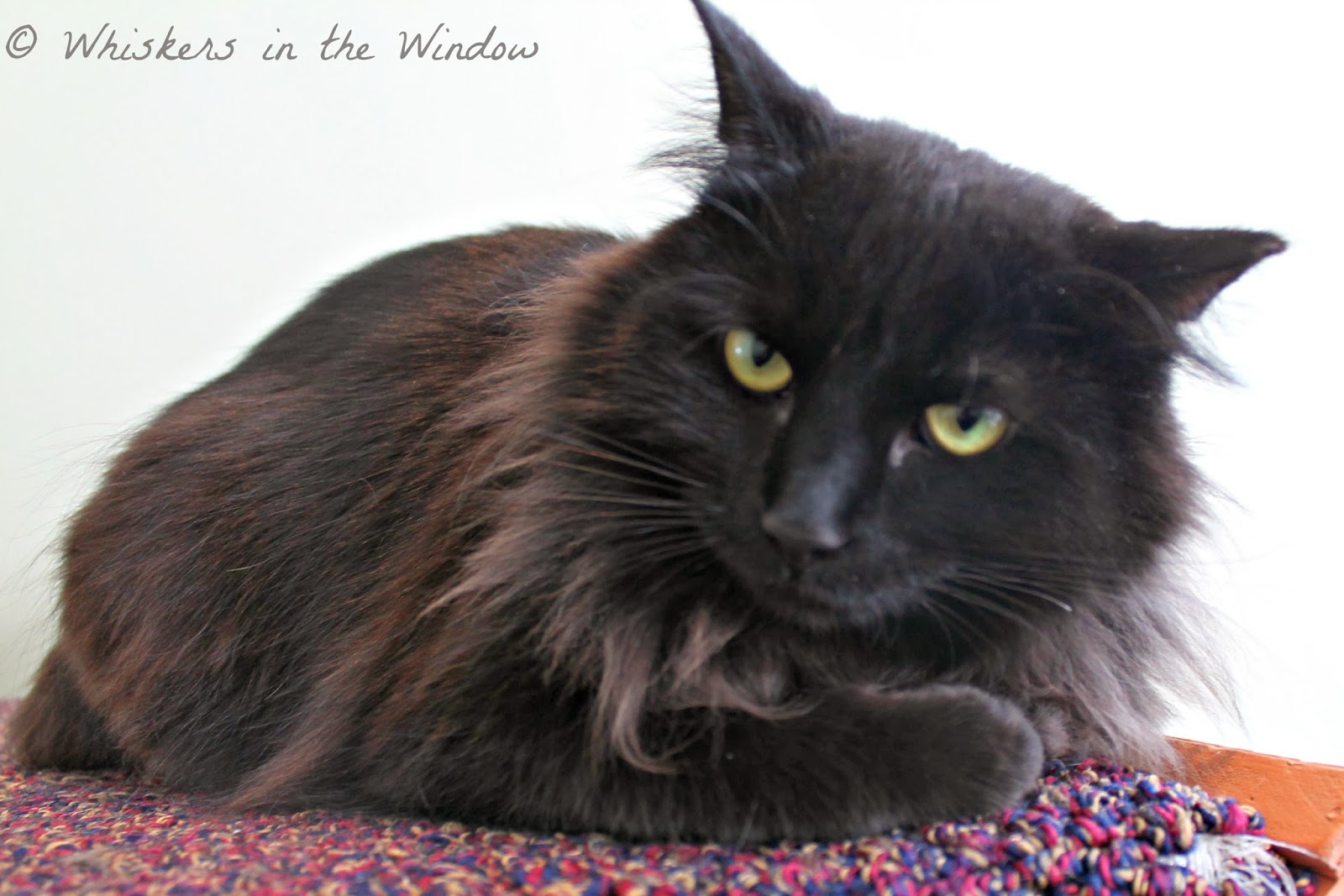 Get used to it, Mae. You have a sister waiting at your new house.