The Evolution of a Cat Painting 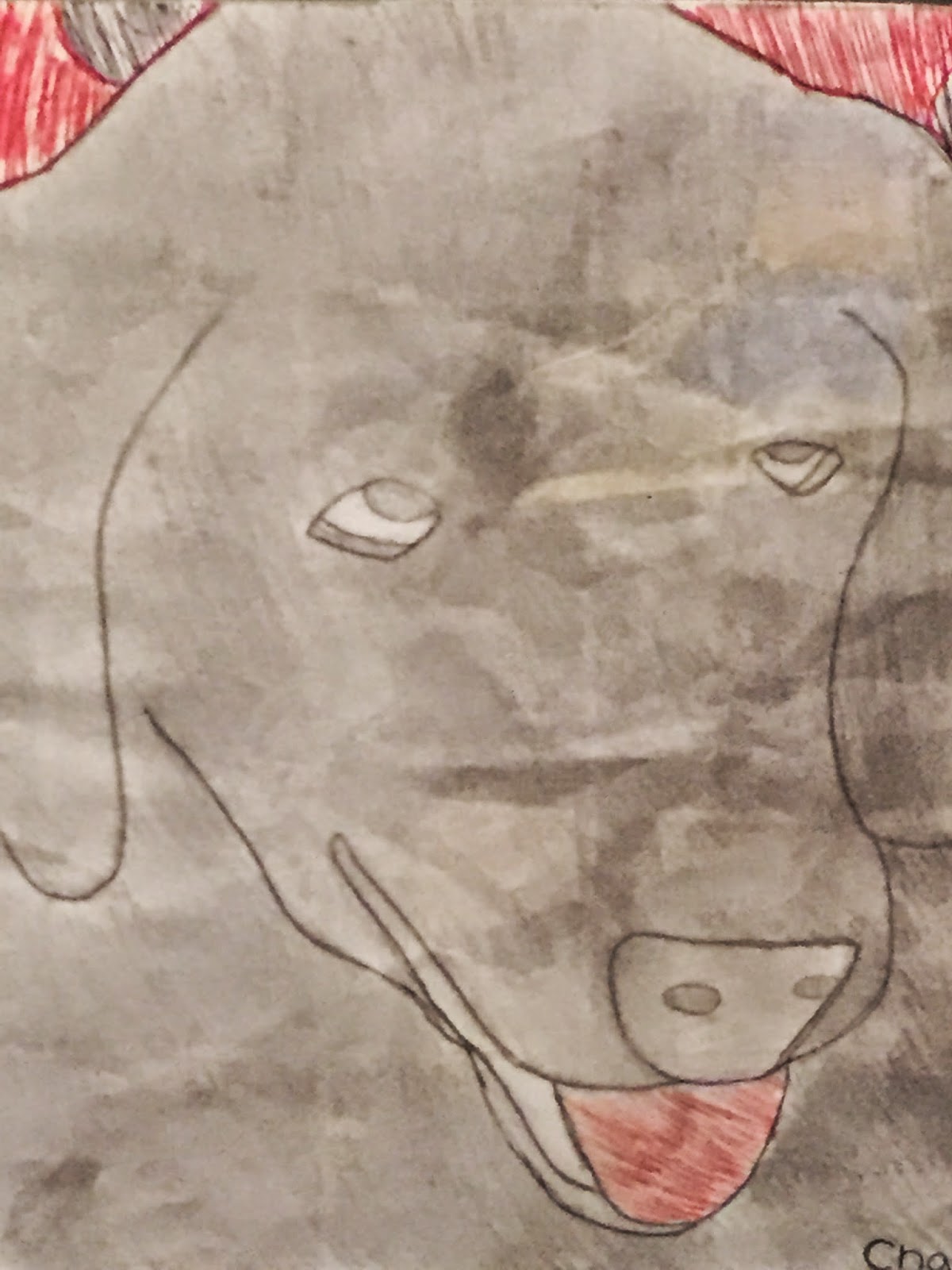 I know what you're thinking...

"Who does she think she's kidding? That is neither a cat nor a painting.
I call shenanigans!"

But hear me out: While this is neither a cat nor a painting, this pencil drawing was the impetus to the actual cat painting that was created today. This dog drawing was a very special Mother's Day gift from my younger daughter. It's a fabulously accurate rendering of my dear departed friend (and Chucklehead predecessor) Grizzly. 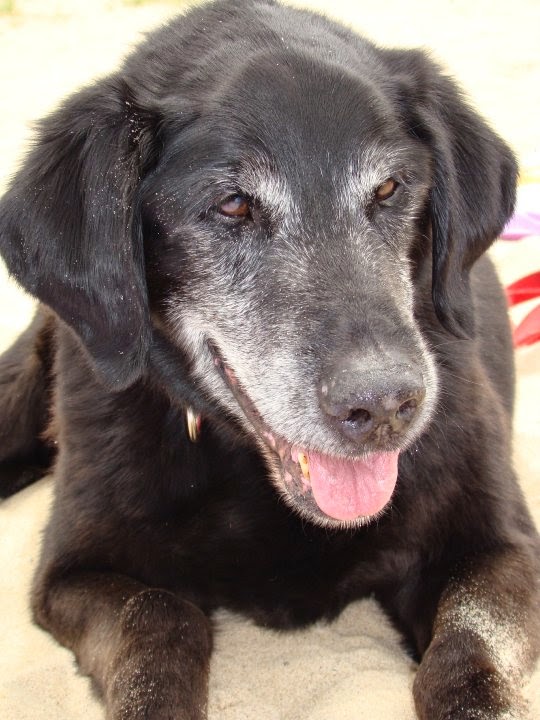 Grizzly spent nearly 15 years with us. He had a partner in crime each and every day of that decade and a half. Her name was Einstein. I had been wanted to memorialize her in a drawing to hang on the wall in tandem with Griz, but my daughter says she's "not good at cats." I dabble a little in painting, so when Miss Jeanne over at Random Felines said she was going to a "Paint Your Pet" retreat at BZTAT Studios I decided that a road trip was in order. 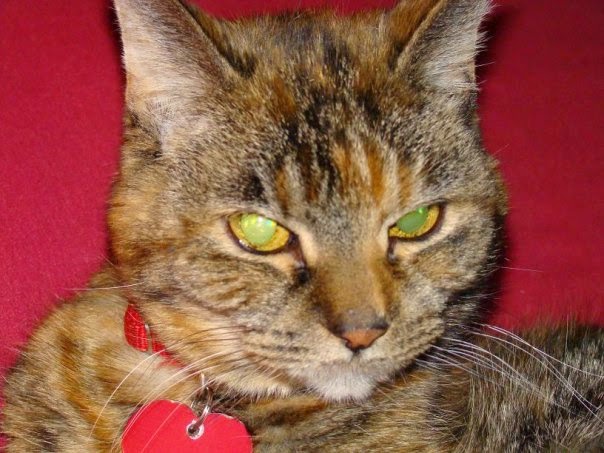 After a 4 1/2 hour drive from home (waaaaaaay earlier than I would ever like to leave my bed, let alone my house), I arrived photo in hand and ready to make a complete mess of painting the late great Madame Einstein. I knew she wouldn't be easy to paint, especially with her torbie-blends and tabby stripes. But with BZTAT's pop art style, I was hopeful that I would at least be able to capture her spirit.

I was given a black canvas when I arrived. With lots of guidance and specialized instruction, the canvas morphed slowly over the next six hours... 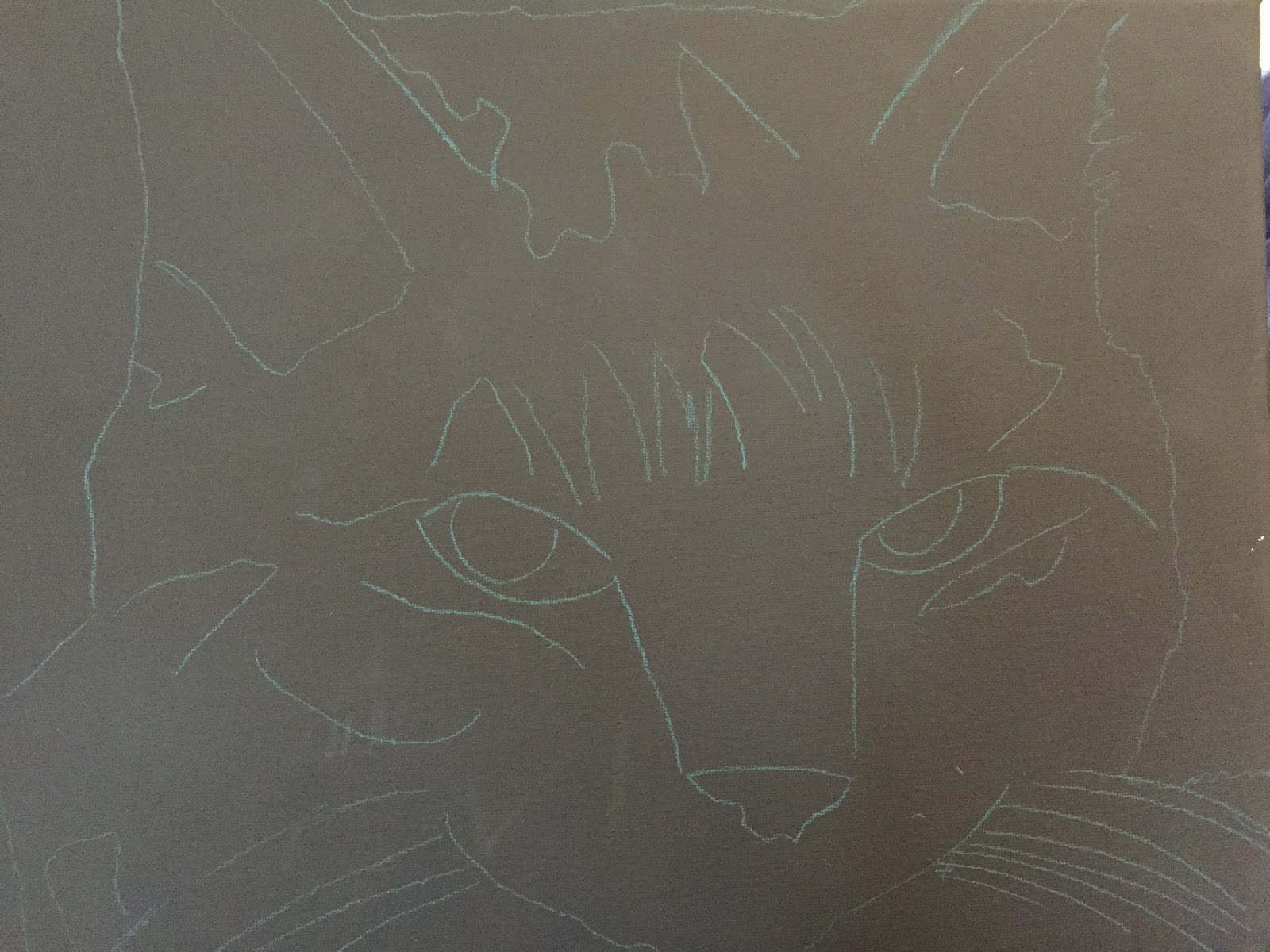 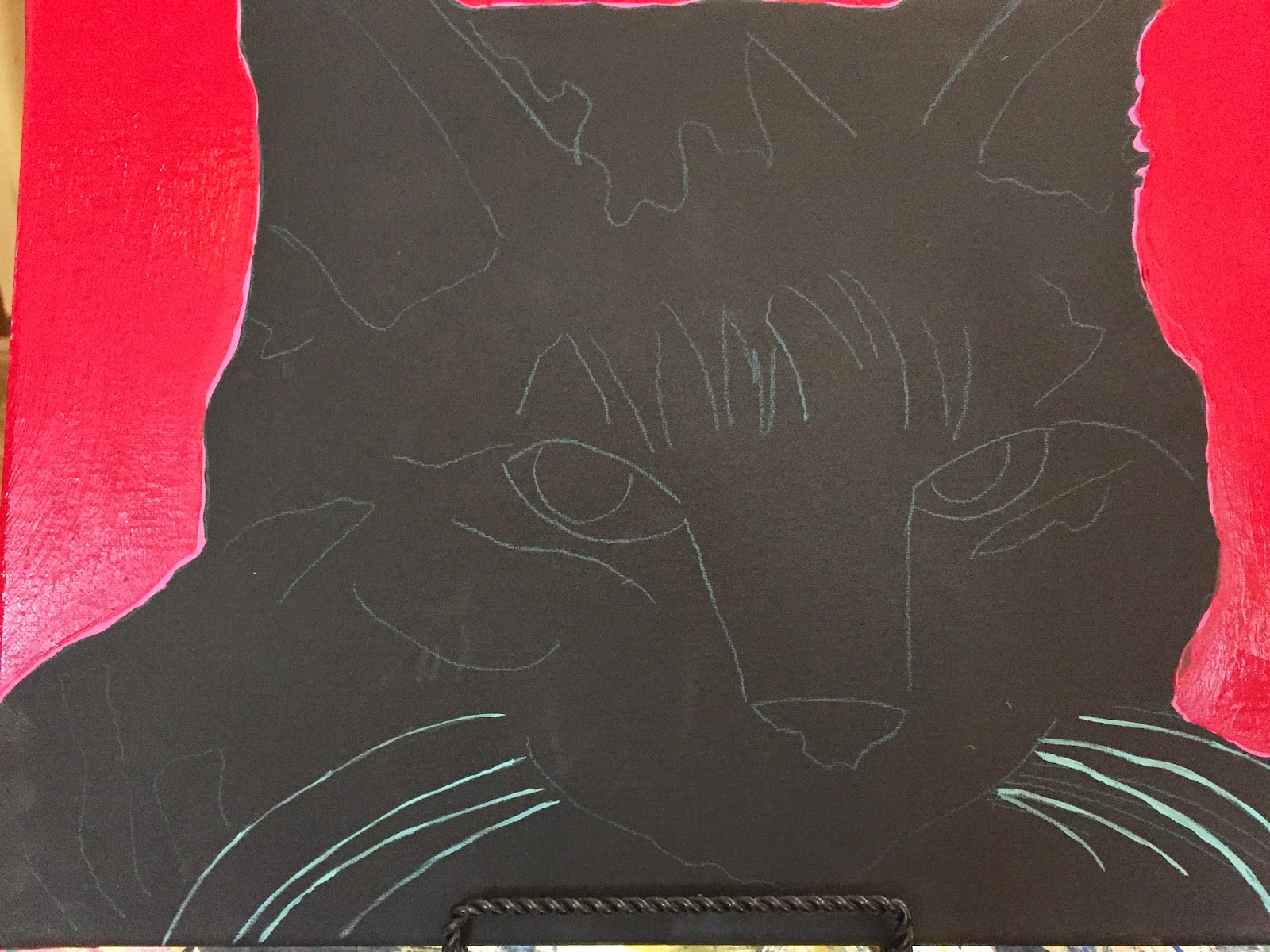 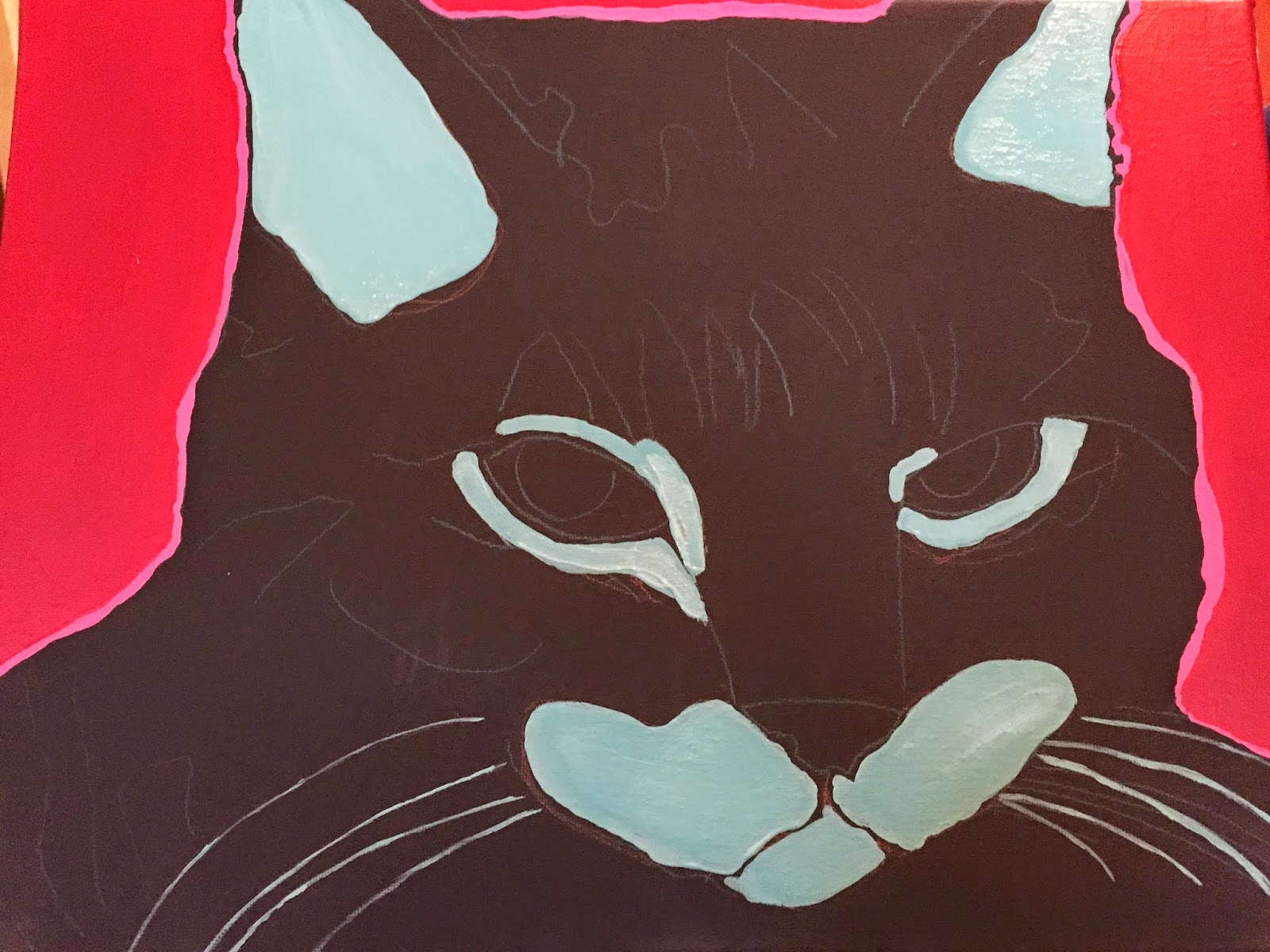 To adding the white definition to her chin and eyes. 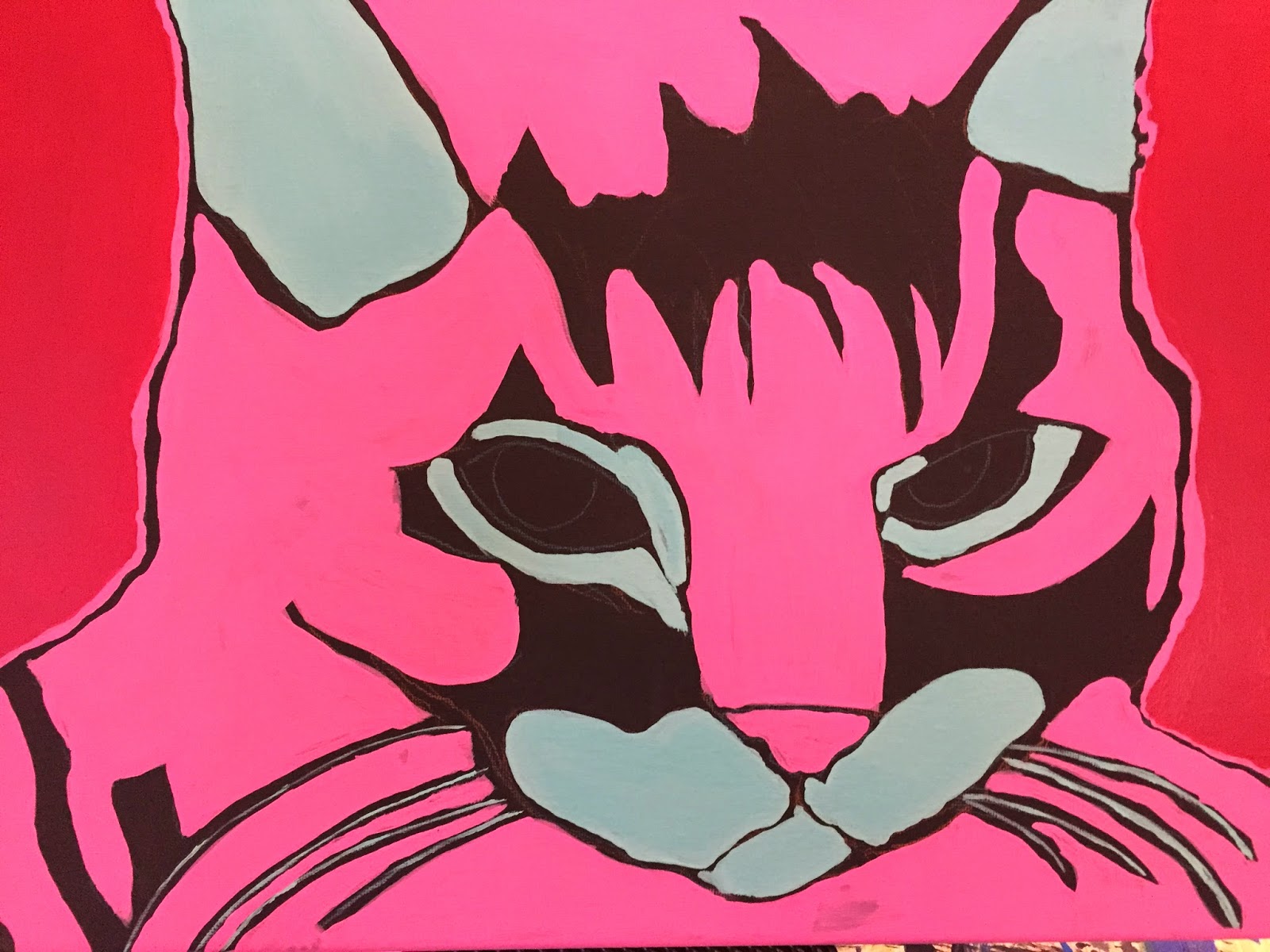 Pepto Bismol pink created the bottom layer of color for her torbieness... 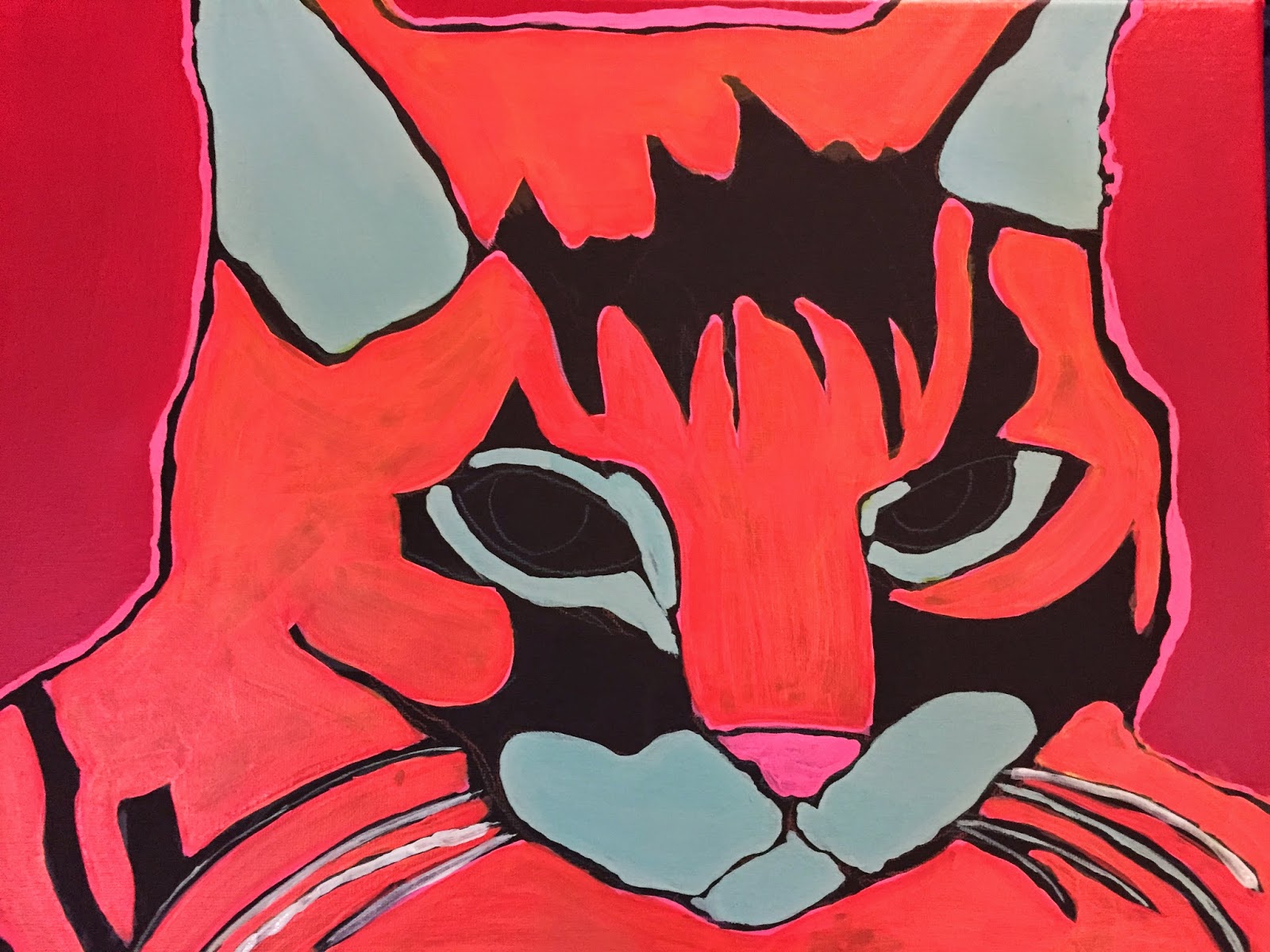 And then was layered with orange... 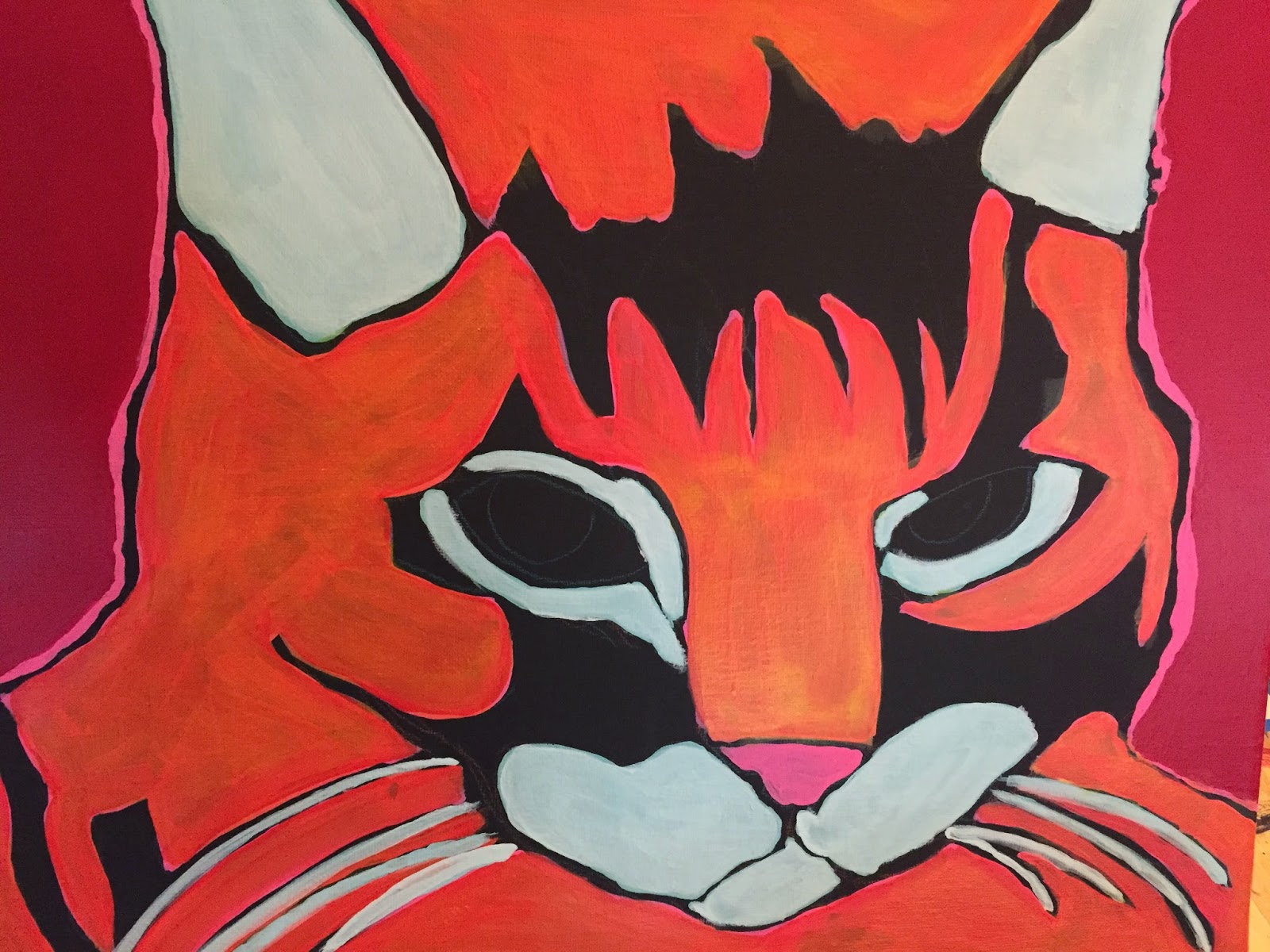 And yellow to create the right "pop art" shade. 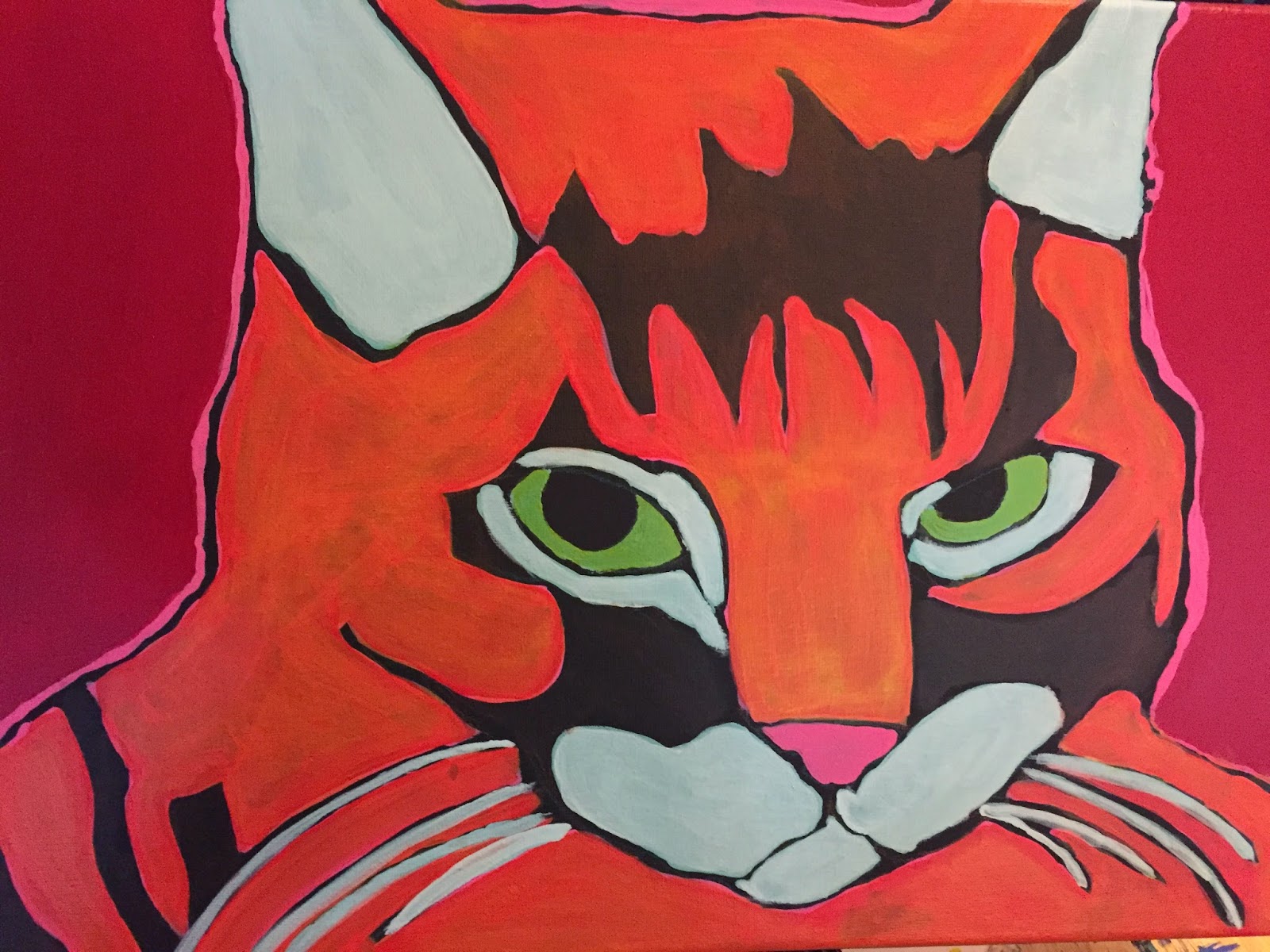 The moment her eyes appeared was the moment that mine filled with tears. 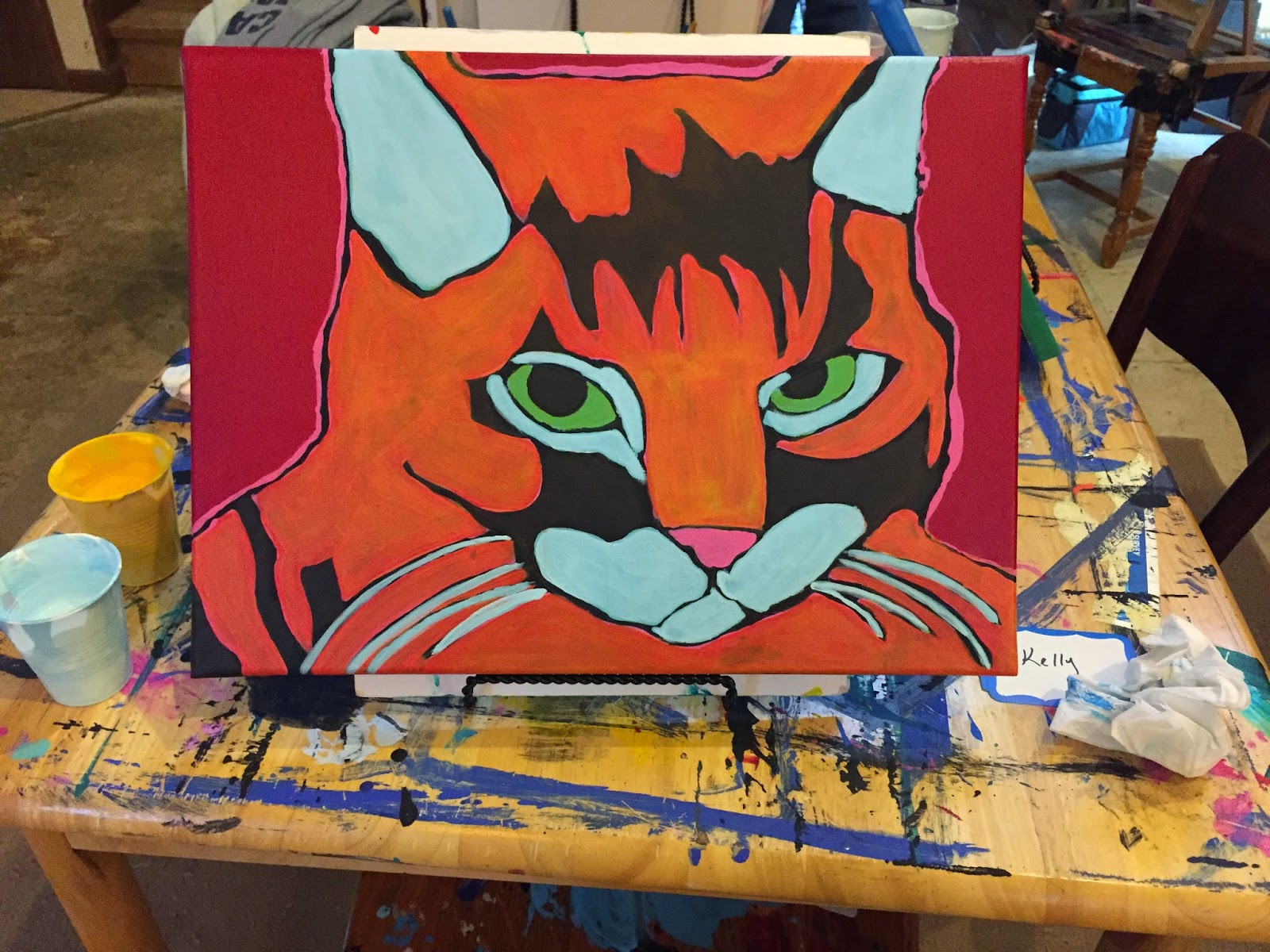 All I wanted was for her eyes and mouth to be look "kinda" right. 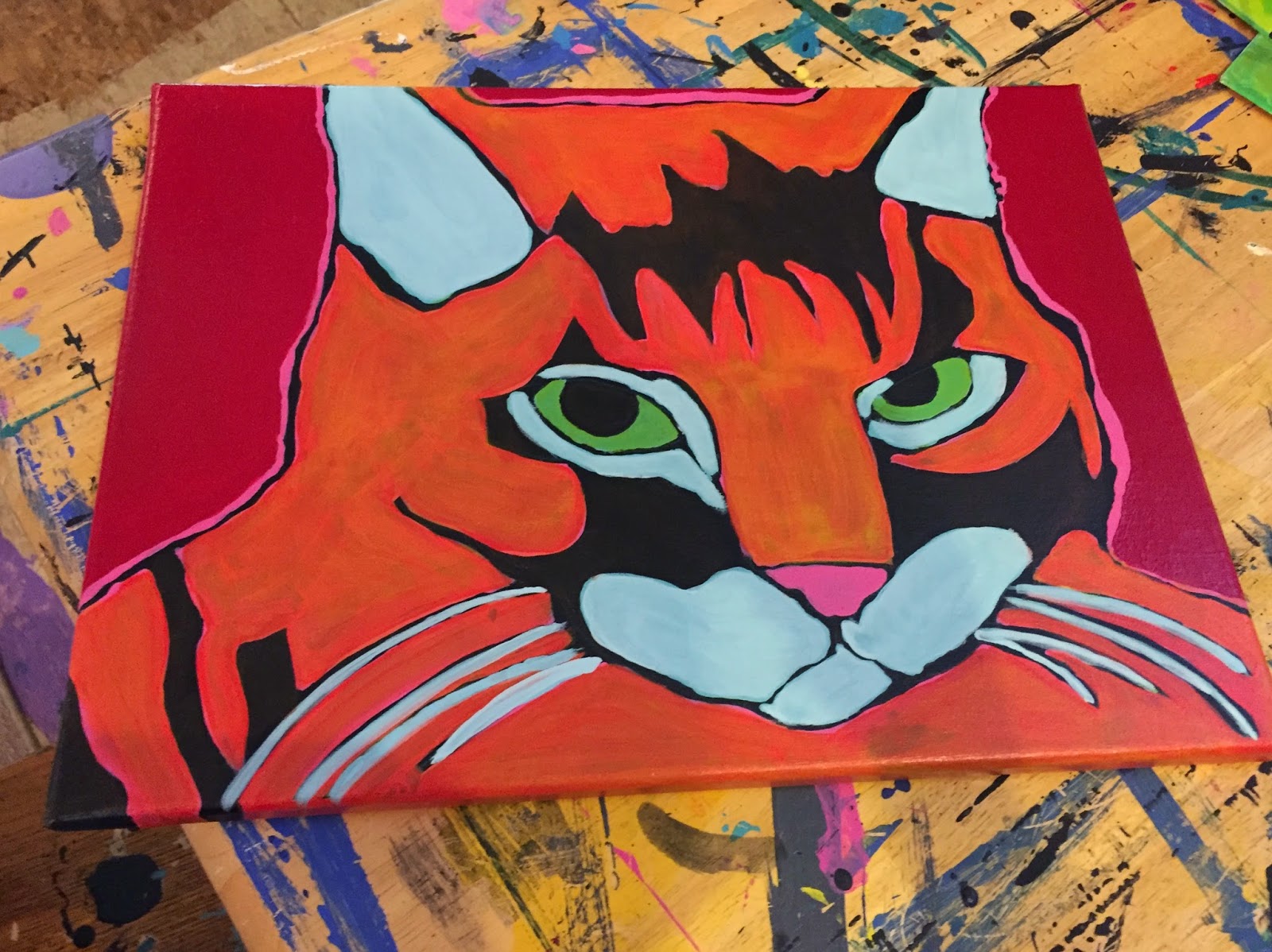 I think I may have captured her Grumpy Little Highness.

Looks sorta like her if I do say so myself. 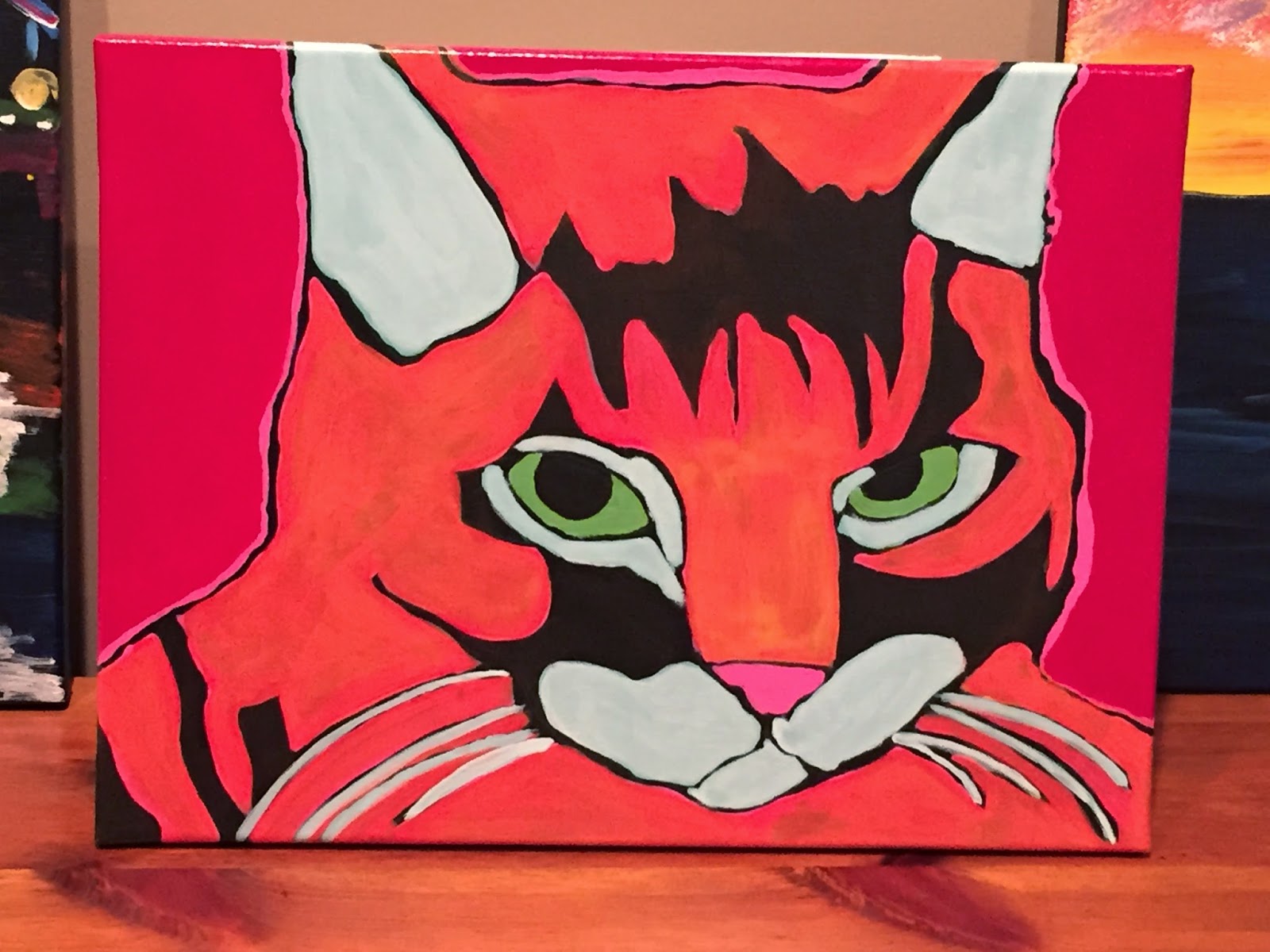 A second 4 1/2 hour drive later, Einstein is home and ready to reunite with Grizzly.

It was a great day. Good people, great instruction, and lots of singing loudly along to the radio during my 9 hours on the road. I'd definitely do it again. Which is a good thing, since there's talk of doing it again in March. 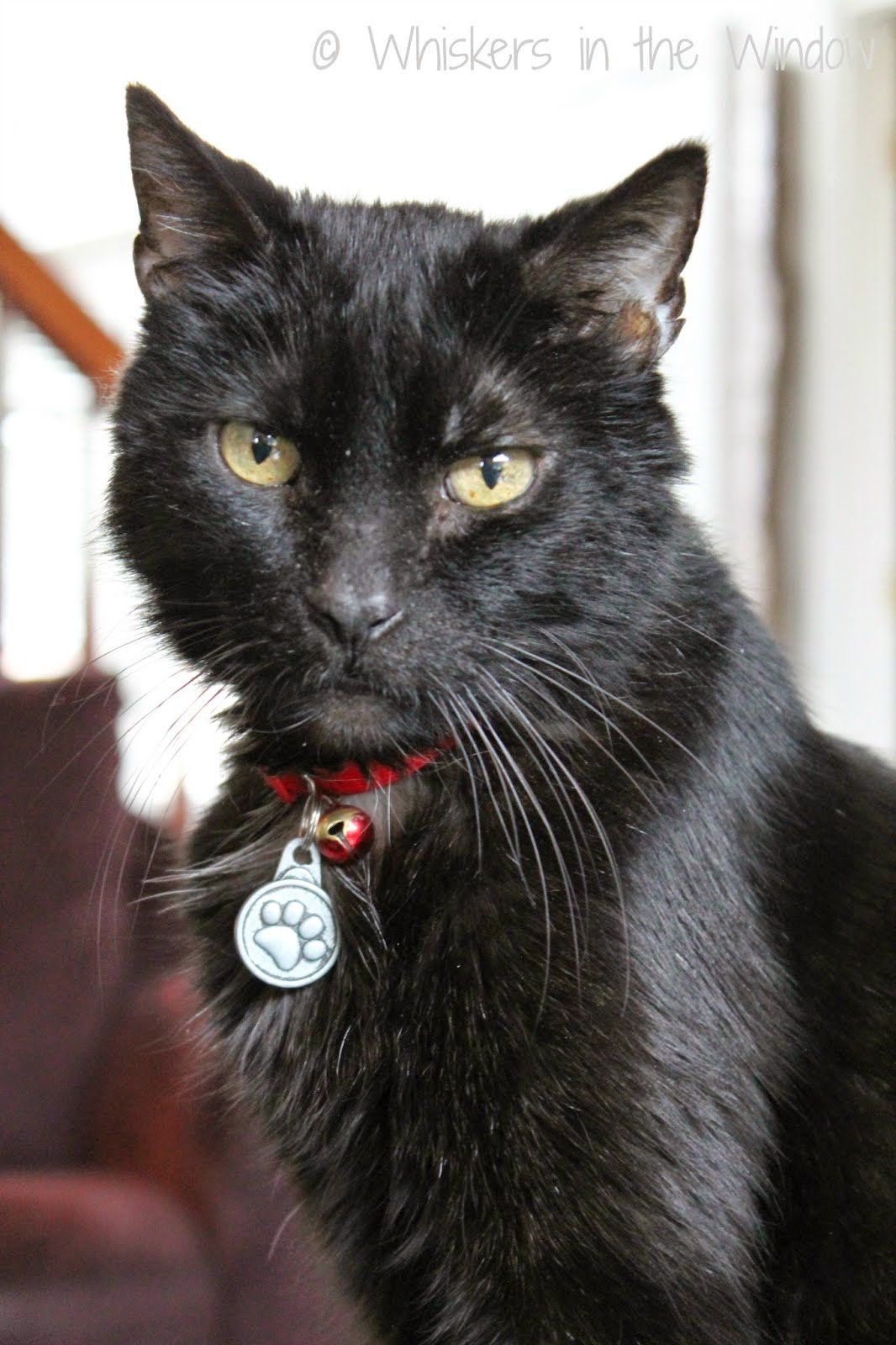 I'm thinking that this dapper gentleman might need a portrait painted of him. 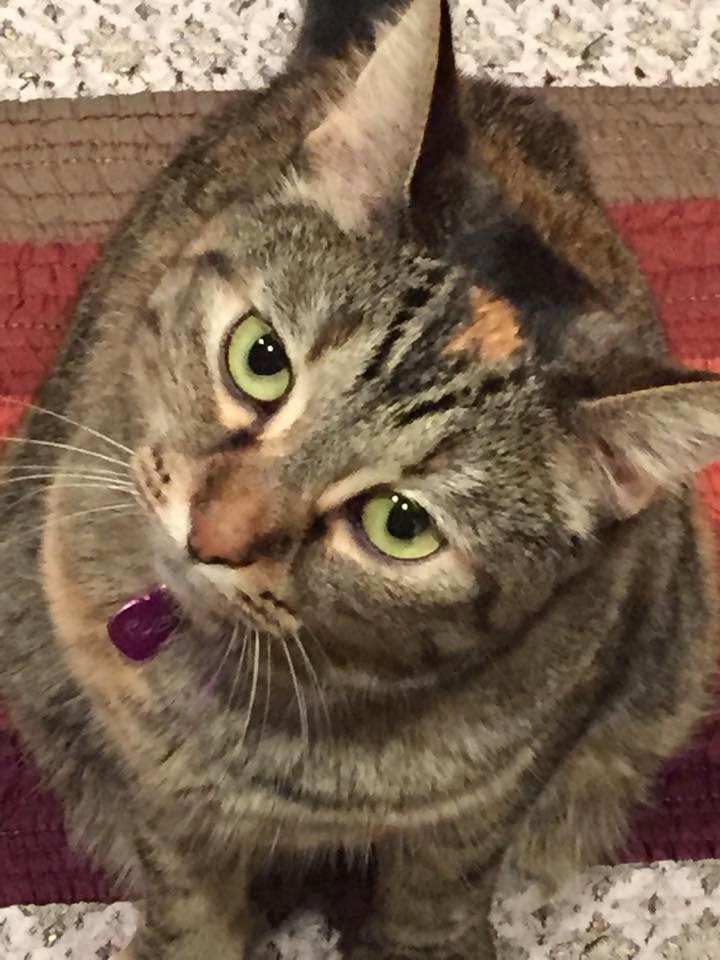 And this young lady called "next" after him.