When I last updated you on Friday morning, my weekend plan included taking Willie Rae and the Quincy-Adams quints to adoption hours on Saturday and Sunday afternoons.  By the time my kids got on the bus that morning, we already had a wrench thrown into the plans. 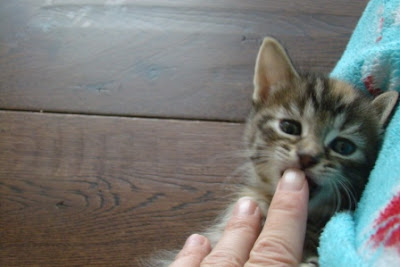 "Willie Rae wouldn't really call it a wrench, Lady.  More like a bump in the road... a big BIG bump (on the floor)."


Remember my open banister spindles with the staircase that forms the fourth wall of my living room?  Remember the "Stooges" (Eloise and Porter) taking the wrong side of the stairs and ending up coming down the hard way?  Well, another kitten has applied for the position of stuntwoman... and her application has been rejected. 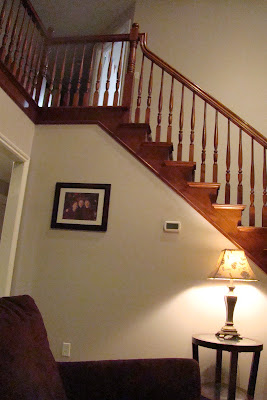 The scene of the crime

On Friday morning, Willie Rae and Abby were racing up and down the stairs, back and forth and back and forth and back and forth, when Willie Rae got it into the marshmallow fluff between her ears that she could avoid Abby on the course if she only took the outside of the stairs instead.  I didn't see it happen, so I'm not sure if she didn't make the turn quickly enough or if she was too fast and took a misstep but I heard the end result... a crashing thud of a three pound kitten onto the living room floor.  ((Now picture Abby, wide-eyed and peeking through the spindles from the landing at the top of the stairs... if her face didn't say "uh-oh Spaghettios" I don't know what would)) 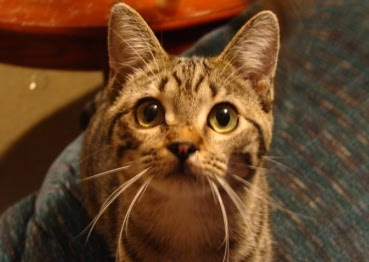 After nearly an hour of a baby kitten hopping around the house on three feet, I called the vet.  We spent the morning waiting on x-rays and pain meds.  Nothing broken, but she certainly was sprained and in need of a little bit of TLC (she got it).  Her limp improved throughout the weekend, but we decided to make sure she was okay before bringing her back to adoption hours... so she stayed home.


"Hey Lady... Willie Rae will just stay home and help you learn how to use your new clicky-box thing-a-ma-bob.  Deal?"

You don't think she planned it that way, do you? 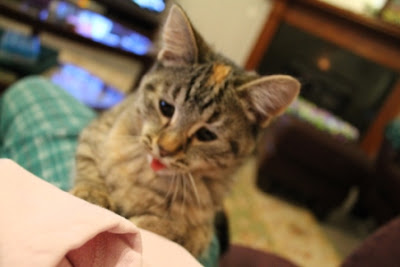 On Saturday, I packed up the five Quincy-Adams boys and headed to Petco.  We already knew that Woodward would be going home with his new family.  Before he left, he had a very special visitor... 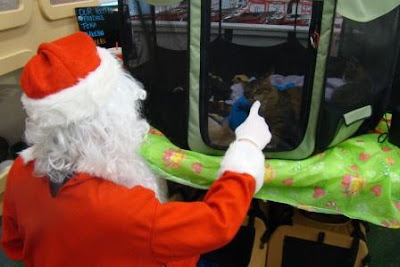 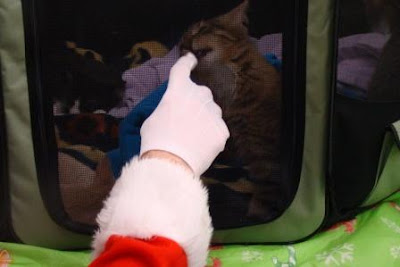 "He tastes funny too" 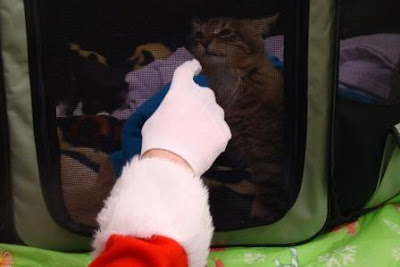 Woodward has a fabulous new home with a new mom, a new dad, and a new kitten sister who is about 12 weeks old.  Happy life, my sweet bear.  Happy life.

Saturday adoption hours were slower than slow.  I arrived with five boys, one who was already adopted.  I went home with four boys in tow.

Sunday adoption hours are traditionally pretty dead.  I think we've done one adoption total on a Sunday in the past two months (or more).  So imagine my surprise when at the end of the day, we had found new homes for... 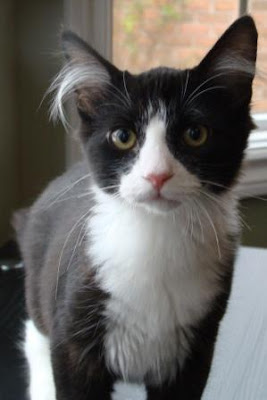 Rocky was quite the popular young man on Sunday.  He spent the first couple hours of the day being passed from potential adopter to potential adopter.  He went home with a wonderful young couple.  He has a new mom, a new dad, and a dog in his new home.... and lots and lots of toys.  He went home with an overflowing cart of Petco goodies.  Our boy is very spoiled and very loved (and very missed already).

Not far behind Rocky was.... 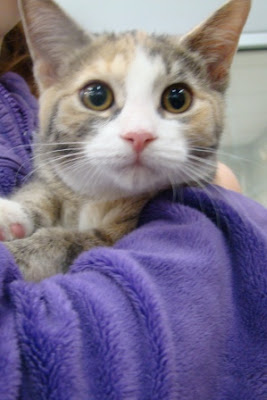 Malibu went to a fabulous home with a new mom and dad and a calico sister named Callie.  She caught her new mom's eye right away, but she had competition... her brother Lincoln.  Mally's mom went back and forth, spending quite a bit of time holding each one before making her final decision.  Our sweet girl (and last sister of the litter) hit the jackpot.

It was all well and good that Malibu won because the next one to be spoken for was... 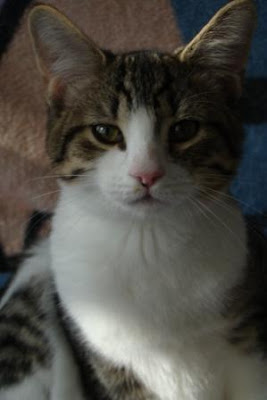 Our Lincoln went home to a wonderful family who needed him very much.  They recently lost their much beloved cat to cancer and had started the day by just looking to see if a new kitten might make them feel a bit less broken-hearted.  While Malibu's family was making their decision, they met Lincoln and Peeps and Cooper (but fell head over heels for Lincoln).  Once Mally's adoption was finalized, it opened the way for Linc to make the next move.

Lincoln's new family includes a mom, dad, sister, and two dogs.  Their work schedules vary enough that he will rarely be alone, which means our cuddle bug will always have a lap at his command.  Lucky boy.

And we still weren't done yet, because just as adoption hours were ending a very special proposition came in for... 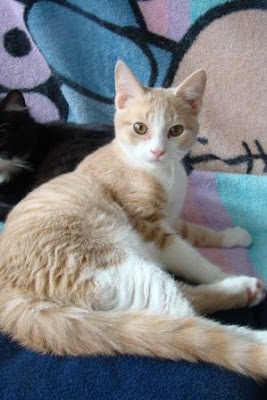 Peeps's new mom came looking at adoption hours last week with the idea of finding a kitten to give to her daughter at Christmas.  She fell for Peeps and brought her daughter in on Sunday to meet the crew and think about "maybe adopting a kitten after the holidays" (wink, wink).  The one that her daughter fell for?  Peeps :)

But, SHHHHHHHHHH!!!!!!  The conversation was held with a lot of winks and nods and secrets because our Peeps will be a very special Christmas surprise for a very special and lucky little girl.  Mom came back later in the afternoon to fill out the paperwork and make things official.  Peeps will be staying here at Teeny Tiny Tabby Town until Christmas Eve.  I am so excited to be part of this Christmas surprise that I can hardly stand it.

It was whispered that our Peepers's new little girl has a very special name picked out for her future kitten... Marshmallow.  How perfect is that?  He will be a Marshmallow Peeps! 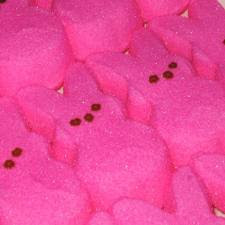 Peeps will be sneaking into his little girl's bed on Christmas morning with a jingle bell and bow around his neck.  He will have a little boy to love too.   Hooray!

Peeps and Cooper are currently the sole residents of the front foster room.  No worries about Cooper, though.  We heard from a former adopter that she was ready to adopt another kitten from us.  After checking the Petfinder listings, she picked one that she wants to meet very soon.  His name?  Cooper :) 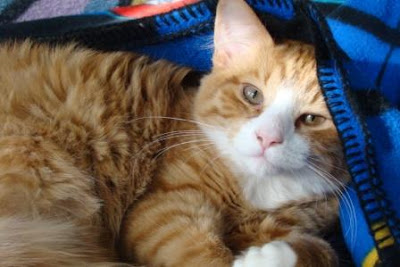 Willie Rae will be returning to adoption hours next weekend, barring any more freak accidents that is.  In the meantime, we're planning a very special adoption evening for our Petco residents... stay tuned for details. 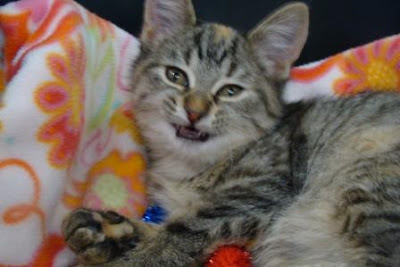 "Adoption?? That's what the Lady thinks. Willie Rae already adopted herself a good family.  They just don't know it yet. "

Futures 4 Felines has a new blog post and new pet of the week.  You might recognize her.  Please consider sharing both her and Henry's stories.  My Christmas (and theirs) will be much happier if we can get them home for the holidays.