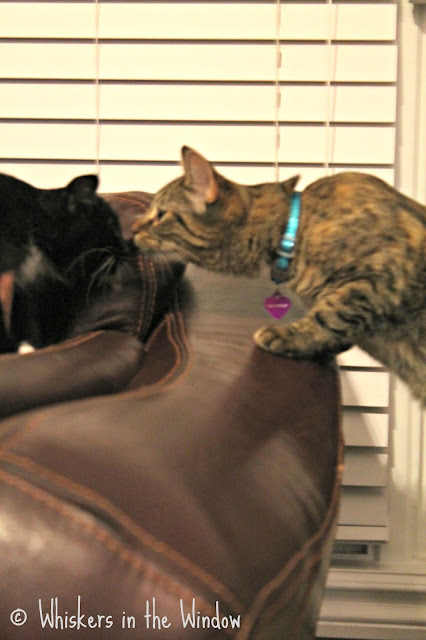 You'll have to use your imagination for the hissing that commenced afterwards (from both sides). This is the only photo of the exchange that ended up being in focus.

The kittens are making brief excursions into the main house, usually one at a time and usually it's Garnet who comes wandering out whenever their door is opened. Belle also puts a foot or two through the doorway but never goes too far on her own.

Maxie's visits are usually of a snuggly nature. My kids have decided that she is the officially Project Runway watching partner. She sits in a lap and purrs throughout the show. While we watched the dvr version last night, she ended up underneath my blanket and nibbled on my toes.

There are occasional conversations of adding a little sister to the family for The Roo. We have discussed a braver kitten who might rub off on Little Ruby Chickenbutt, which narrows the selection to two very special girls. It probably won't happen, as I generally restrict my adoptions to the ones who "need me most". Little Ruby Chickenbutt needed me to save her from the big bad world of strangers. I don't think either of these girls will have difficulty barging into a new home like they own the joint. Besides, Roo appears to be quite comfortable in her role as unquestioned queen. Anything might happen (or it might not).

All five of the front room residents will be attending an adoption event this weekend... you know, just in case you want to meet them ;)