The kittens enjoy their cardboard box immensely.  They sit in it.  They flip it over.  They pounce on each other from on high.  They learned some new tricks with their box on Thursday.  Behold...

One brother (I'm sure you'll never guess which one) kicks it up a notch.

Before long that box had turned into the arena for their own version of Wrestlemania, with Henry and Porter both under the box and Eloise riding along on top.  Alas, all good things must come to an end.  Somehow the box ended up in front of the litter box... where someone PEED on it. (Okay, it looked like an accident of some sort since there was litter in the pee but the arena had to be recycled none-the-less.  I'm on the lookout for another box of a similar size so the games can begin anew.) 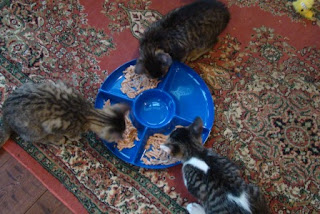 When I found the requisite kitten feeders (aka chip and dip platters) in the dollar section at the store yesterday, I had visions of kittens eating peacefully... everyone in their own place.  I'm not sure Eloise shared my vision. 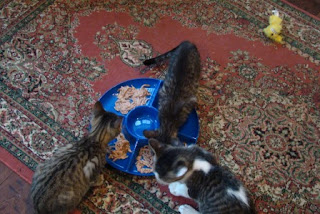 At least she chose to stand in the empty section while helping herself to Porter's dinner. 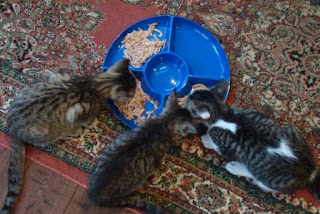 She found it was easier to share from the other side. 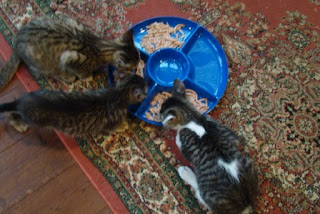 Then she discovered Henry's portion. 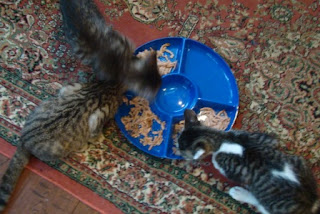 And tackled him when he tried to go after her food.  Can't say as I blame her.  The girl has some catching up to do on the growth chart.  :-) 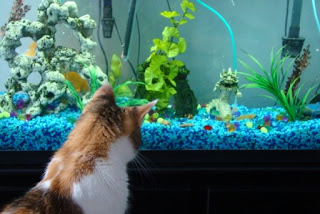 Penny discovered CAT-TV.  (Yes, there's yet another part to our menagerie... 2 feeder goldfish from an elementary school carnival that somehow managed to last 7+ years and are still going strong.  We also have a pleco, or sucker fish, in there.) 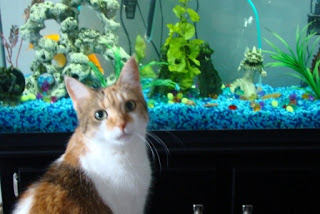