So... OCD and Contagious Kittens Do Not Mix?

Sometimes I'm not convinced that fostering kittens in a room with a view to the rest of the house is such a great idea.  Occasionally it feels I'm living within an exhibit at the zoo. 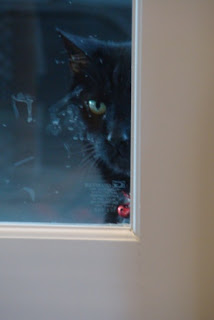 Creepy Uncle Norman likes to keep an eye on the kittens... and their crunchies. 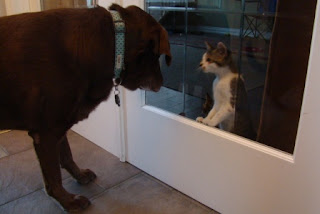 Crazy Cousin Chuck likes to know what's going on in there, too.
(And now you know why the door is so dirty in photo #1) 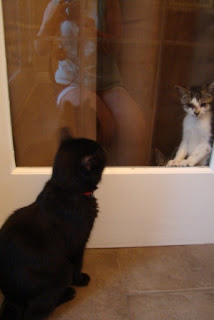 The photo in which we learn that teeny tiny kittens can make skinny old man cats look huge. 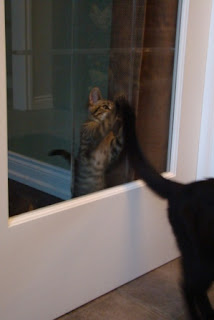 That Henry is always looking for something to play with... Uncle Norman's tail is just out of reach. 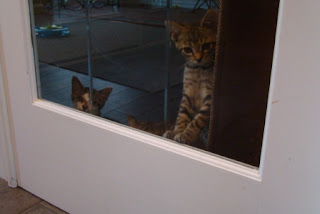 To put it mildly, I'm a worrier.  Some might label me obsessively so.  In most situations, being a compulsive worrier could be seen as a benefit... My tasks are meticulously done and ahead of schedule.  My house is orderly and clean.  My children make infrequent emergency room visits.  I am an organizing guru who foresees incidents before they occur and prevents or minimizes them... let's call me PROACTIVE!!

I will admit that I was not prepared for the huge dose of reality that a litter of contagious kittens brought into my foster room.  Fleas were stressful, but they're gone and the entire house has been Frontlined, sanitized, and vacuumed within an inch of its life.  Ringworm, however, has knocked me for the proverbial loop.  To watch a baby kitten's face develop sores that worsen before they get better is bad enough.  To have the knowledge that the condition is highly contagious and that one wrong move on your part could allow it to spread, not only to the other foster kittens but to the adult fosters, your permanent residents, children, husband, and the general world at large???? ((Heh... you've just gotten a glimpse into my OCD skull.  Scary, isn't it?))

On Friday, a troublesome kitten (Why, yes... it WAS Henry) swatted me on the lip while I was trying to medicate his ears.  I instantly touched it with a hand full of anti-fungal drops (We'll call that Mistake #1).  Throughout the day, the spot on my overly sensitive skin turned blotchy, then pink, then red.  My worrier genes kicked in to hyperdrive and I self-diagnosed (Mistake #2) with early onset ringworm and put a dollop of anti-fungal ointment on it (Mistake #3) before going  to bed.

Two days later, after experiencing a blister moustache of epic proportions and lips puffy enough to make any Botoxed Real Housewife jealous, I headed to the doctor... Allergic reaction to the first anti-fungal drops (that I had neglected to wash off) and chemical irritation from the dollop of ointment.  NOT ringworm.  My doctor laughed, told me I made it worse with all of my worrying, and reassured me that if I happened to actually catch ringworm from the kittens she "has medicine to fix that".   I'm under orders to chill out a bit (yeah, right... but I HAVE realized that I can only do as much as I can do and am *trying* to let the rest of the world worry about itself).  So I'm headed off in a bit to spend most of my Wednesday on a boat.   Hence, a post light in photos for Thursday that I will try to rectify for Friday.

PS--- I tell you these things, not so that you worry about me or begin to think that fostering is "too much work" or "too much stress" (on the contrary, it's a fabulous experience that more people should get to enjoy).  Please laugh with me or even laugh at me.  I may be a worrier, but even I can laugh at the trouble my own worrying causes.


PPS--- While his poor little face still looks under attack, as of Wednesday evening the redness and swelling around Porter's eyes and mouth have decreased significantly.  I know I'm in for a long haul, but I'm hopeful that we might have this thing under control within the next week or so. 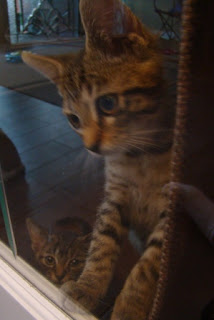 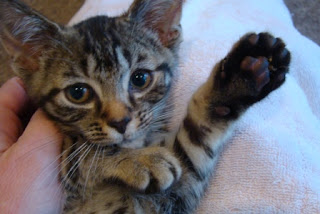 "Bye Bye, Lady.  Do they have jars of chicken baby food on boats?  Can you bring one back for Eloise please?"