We've had an eventful week with lots of news and changes and more news as we get to know the munchkins in the foster room.  I thought it might be nice to send you off into the weekend with some updates about life in Teeny Tiny Tabby Town. 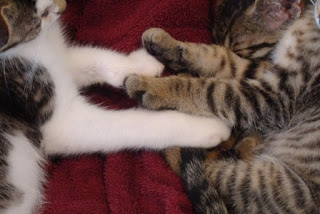 Eloise began her stay here as the most serious little flea infested thing that ever walked on four (very short) legs.  She shrank away from human contact for the first few days but after ten days of love and care, she is the by far the most affectionate kitten in the bunch.  She comes crying for snuggles and doesn't care what you are doing... SHE MUST HAVE THEM!  Eloise allows cradling like a baby, nose booping, and insists upon belly rubs.  She rubs on feet and chews on toes, especially if they have nail polish on them. 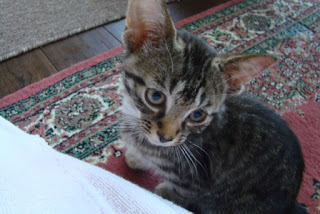 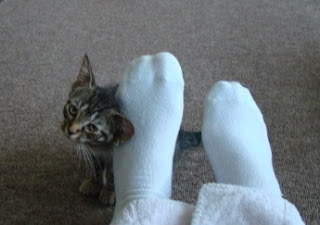 Weezy rings the dinner bell (and the breakfast bell and the lunch bell and the snacking time bell) for the entire foster room.  When Weezy's hungry, everything stops until a can gets opened.  She has a quiet, throaty meow, but she means business.  Her serious little look never changes.  The combination of big ears and round eyes give her a studious air, like she's questioning you each and every moment.

Eloise is currently the healthiest kitten in the foster room.  No signs of fleas, upper respiratory, or ringworm on her.  We intend to keep her that way. 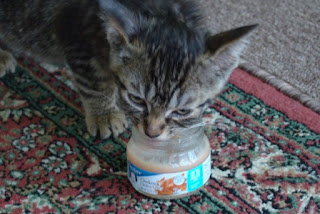 "Gerber chicken baby food is my secret to good health.  Now if I could only fit my entire face in this jar..."

Henry came in as the wild child and Henry remains the wild child.  Whatever object holds his focus IS a toy and there is no persuading him otherwise.  He slightly unnerves me when we cuddle and talk because he focuses so intently upon my moving lips and hair blowing in the breeze of the ceiling fan.  He has pounced at both on more than a few occasions.  He jumps at everything claws out.  My lips have the scars to prove it.  There is no tail that is safe.  On Thursday, he attacked Eloise's tail and got his claw stuck on the tip.  Boy, did she give him what for! 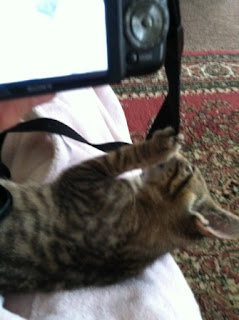 "I don't know how you expect me to sit still for pictures when your camera-thingy has this awesome toy hanging from it!" 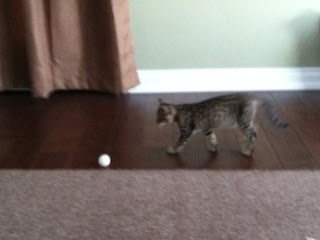 "No time for non-blurry pictures, Lady.  There's a ball to chase here."

Henry is the first kitten to greet me at the door to the foster room... every time.  He sprints like his tail is on fire.  He must be involved in everything.  It really doesn't matter how anyone else feels about it.  He would snuggle, but he gets distracted too easily and finds something to pounce on instead.  I imagine he sleeps, but refuses to do so in my presence. 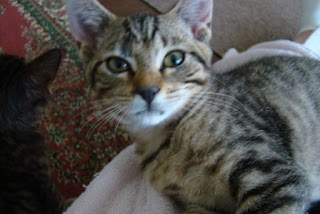 Henry arrived wheezing and sneezing.  Most of that is gone now.  I haven't heard a wheeze in several days and we're only treated to the occasional sneeze now.  He has a touch of ringworm on his ears and above one eye.  He has lost the fur there and is crusty, but hasn't become red and swollen (and this is after several days).  I'm hoping that with medication, this is as bad as it gets. 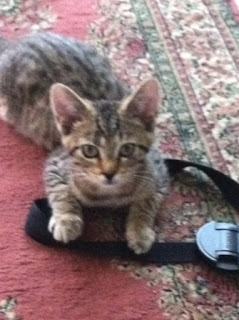 "Oh good, you found another camera... because I'm keeping this one."

Porter is my special love.  He wants desperately to love me, but his health issues are getting in the way... namely, I medicate and bathe him.  When I am in the room, he stares at me from afar and purrs.  He cocks his head when I talk to him.  I can tell that he's trying to decide whether or not to be brave and visit me.  We are beginning to reach an understanding... with the help of routine and Gerber chicken baby food.  (Ugh... you know how much I love him if I'm willing to touch that stuff.) 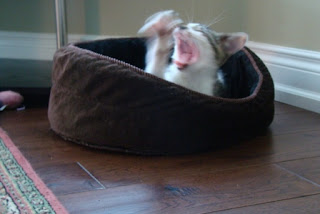 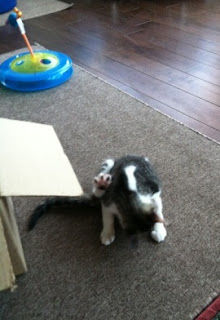 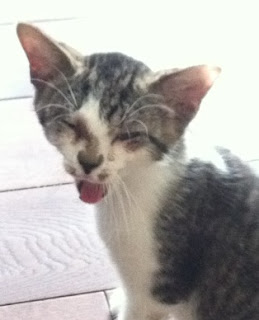 "Honestly, Lady... you're as bad as the paparazzi."

When the foster room doors are closed and I am out of the way, he is a completely normal kitten.  Porter and Henry have hours-long sessions of Wrestle Mania.  It sounds like thunder in there, even when the skies are clear.  He loves the track ball and chasing a ping pong ball across the room.  His favorite place to nap is in a sunny spot on the very tippy-top of the cat tree. 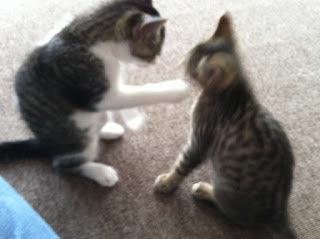 After a week of worry, we finally seem to be seeing a bit of progress with Porter's ringworm.  Instead of red and raw, his sores are starting to look crusty and drying out.  We stumbled upon a medication strategy that works for both of us.  I wrap his body in a towel, hold him like a baby, and dab the drops onto his face with my gloved fingertip.  He then waits patiently as I free one leg at a time to squirt the drops onto his sores there.  When I run out of legs, he runs off my lap.  His goopy eyes have cleared and I haven't heard him sneeze in days.  Improvement... that's all I need for now. 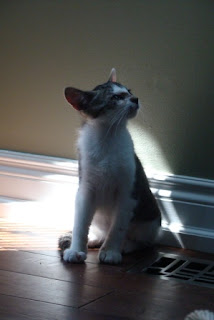 After talking to the vet about preventative measures for ringworm, I decided the easiest thing to do clothing-wise was to leave an old bathrobe and a pair of socks in the foster room.  The plan was for me to put them on as soon as I walk through the door so I'm completely covered except for my hands and face.  The kittens had other ideas.  Apparently the inside of my robe makes the most excellent hiding spot for pouncing on a sibling.  We've had many wrestling matches around my ankles.  So now when I leave the room, I wash hands, face, and ankles  ;-) 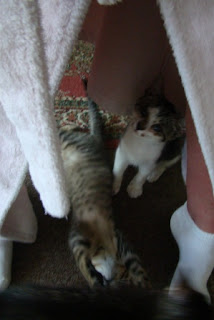 Henry swats at a streaking Eloise while Porter looks on from inside my ratty pink bathrobe.

Penny isn't so sure that she likes this "freedom" thing.  Even with the run of the house, she usually stays upstairs... mostly walking between the family room and the top of the stairs (which are open to the living room) to tell me off for leaving her door open.  She complains loudly if one of the boy cats enters her space and even louder still if they look at her food.  But since there is no fighting and no aggression, I'm calling it a success.

Our Penny princess has become a bit of diva in the food department.  She has expressed a clear preference for canned food.  If I drop kibble in her bowl, she gives me a looks as if to say "Why are you feeding me this crap?" and then she walks over to space where her wet food bowl usually resides and meows expectantly. 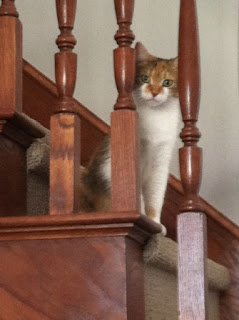 "You can open my door and give me freedom, but this is as far as I'm going.  There are boys down there!"

Tommy isn't one bit interested in the commotion going on around us.  He would just like his favorite spots to remain free from other cats.  For the most part, he gets his wish. 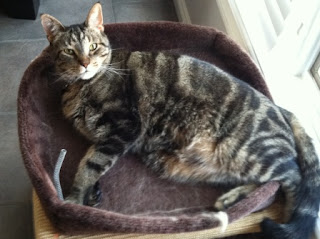 Norman can't understand why I won't let him in the foster room.  He also has issues with them having access to kibble 24/7 while he does not.  Additionally, he has no problem with Friday the 13th.  He would like us all to just deal with it and hug a black cat. 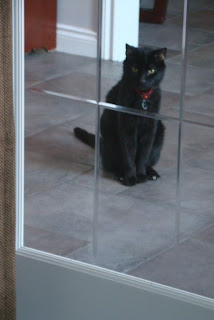 Uncle Norman keeps an eye on those kittens. 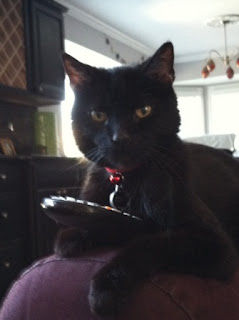 "I'll just hang on to the remote this evening.  How about a "My Cat from Hell" marathon?"

Simba can't understand why I would want to have so many cats in the house.  After many days of avoiding me completely, he is starting to come around a bit.  BUT the jerk has sprayed in my basement (which he apparently considers his lair).  Luckily, he seems to only be interested in spraying a concrete floor so it's been easy to deal with so far. 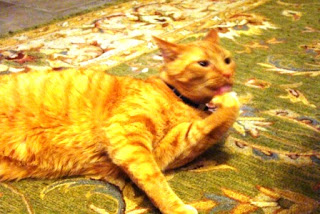 "If Norman thinks those cats on the television are bad, just wait until I finish washing up the Paw of Doom"

Charlie just wants someone to throw him the ball already. 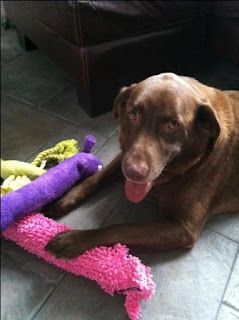 "Or we could play with these toys instead..."

Have a great weekend everyone. 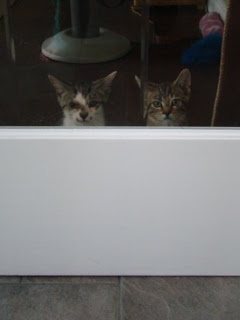 "We'll just wait here until you come back on Monday."