As you all know by now, I have been eagerly awaiting the arrival of kittens to the front room.  I assumed that we would be waiting until after Penny was spayed and vaccinated later this week, but apparently the universe had other plans.

I received a call early Tuesday afternoon from Paula, the wonderful lady who runs our rescue.  There was an emergency situation.  Was there any way that I could meet her at the vet's office and bring a few kittens home with me?  Um.... YEAH!  We shuffled the feline sleeping arrangements, moved Penny upstairs into our family room, and cleaned the front room in preparation for our new arrivals.

I will admit that I was not completely prepared for the situation that awaited me at the vet's office.  My new charges were rescued just that day... from a rescue.  Apparently, the foster mom who had my babies was overrun with kittens.  She took on much more than she could handle on her own and waited far too long to ask for help.  Our rescue is in the process of taking more than a dozen kittens from her home, in varying states of health, sorting out their issues, and getting them into new foster homes asap.  We have three kittens here... a mixed litter that we are combining into one (a pair of siblings and a singleton).

The wee ones were sleepy, sluggish messes to behold.  Our babies have a touch of upper respiratory infections.  One of the boys has a set of goopy eyes that we will be medicating for the next week.  They have worms.  The worst part, though, is that my munchkins were covered in creepy, crawly fleas.  I'm not squeamish, but this was disgusting, unnerving, and angering to see.  The boys were immediately dosed with CapStar at the vet's (our petite princess is too small to receive the meds) and each of them received a bath with Dawn dish soap in the laundry room sink as soon as we walked through the door.  Only one of them drew blood in the whole experience.  I'll try not to hold it against him.  I've only seen a few half-dead bugs on them or their bedding in the hours since.  Each will get a dose of Frontline first thing Tuesday morning.  The not-so-teeny-tiny set (already on regular Frontline) got another fresh dose right away.   After I sterilize their bedding and give the foster room another good vacuuming later today, I think we will be set.  In the meantime, I have already vacuumed three times, done 2 loads of laundry, sprayed down the car and carrier, and checked the kittens about a million times.  I'm heading to Petco first thing in the morning to pick up some DE.  I read that you can use it as a flea remedy too.  Everybody's getting some!!  And before you ask... yes, I am the mother that goes nuts and gets imaginary itches whenever a kid in my kid's class gets lice.  So I'm sitting here, itching imaginary itches, and planning to do another round of deep cleaning in the morning, just in case.

After a bath and a good nap, our babies are completely different kitties.  They are playful and adventuresome and complete snugglebugs.  I have witnessed each of them eating, drinking, and using the litter box (boy, can they use the litter box!), so I am relaxing by the minute and enjoying watching my little ones run and climb and play.

About their family name:  I have a BA in History and nearly an MA in Humanities.  I taught high school history before my kids were born.  I'm a history nerd and proud of it.  In order to keep the litters straight in the future, we figured out a plan to give them surnames of a certain order.  Especially relevant given the fact that tomorrow's the 4th of July, we are naming them after our U.S. presidents beginning at the first... George Washington.  The next litter will be Adams and so on. 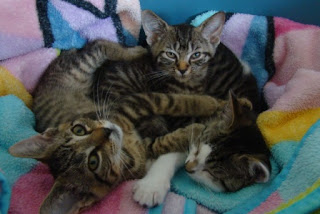 (Left to Right): Henry, Eloise, and Porter Washington snuggle into the foster room following their baths. 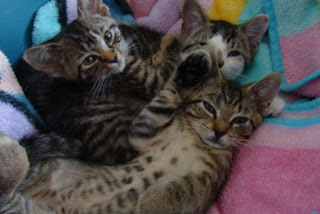 Henry says "Hi!" (Admit it.  You totally want to snorgle those belly spots!) 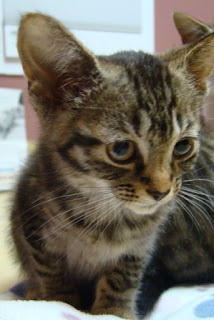 Henry's sister Eloise has some of the biggest ears that I have ever seen on a kitten. 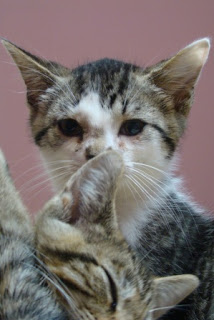 Porter is the singleton.  He is roughly four weeks older than Henry and Eloise (they are about 8 weeks old, while he is estimated to be 12 weeks) but he is very close to Henry's size.  Goopy eyes, upper respiratory yuck, and bit more cautious than the trouble twosome, with the help of a little TLC he is already starting to blossom and is currently swinging from the upper level of the cat tree. 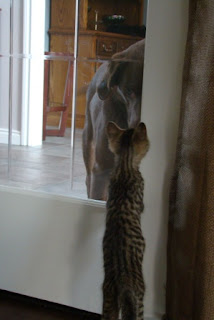 Henry and Charlie are already anxious to meet.  I'll have more in-depth introductions as the week goes on.