What a weekend. 70 and sunny on Saturday meant capri pants, sunglasses, and dinner on the grill. 50 and pouring rain on Sunday meant jackets, umbrellas, and a crock pot stew. Fog rolls in Monday morning... Welcome to spring in Michigan (actually, that can be shortened to "Welcome to Michigan")

My apologies for the lack of new photos in today's post. The camera kept disappearing from it's normal "grab and go" position. Someone has been documenting the developments in a Science Fair project. Go Science! I have regained custody of it and promise to have plenty on hand for Ruby Tuesday tomorrow. 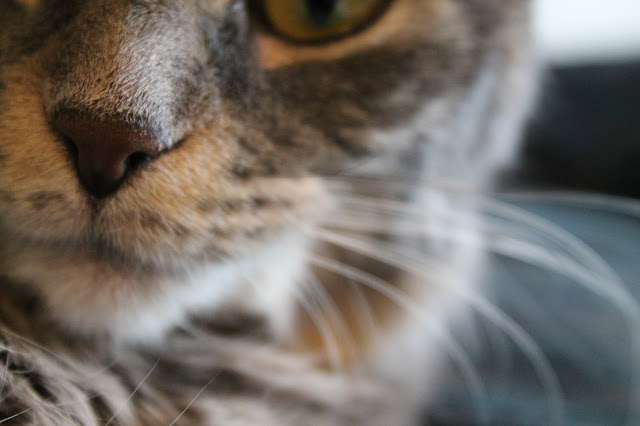 Mama Clarice got up close and personal with a new friend this weekend. I'm not sure if I have mentioned that we are still keeping her upstairs in the family room and separate from the crew. This has nothing to do with her FIV+ status as I'm not worried a bit about fighting or possible infection of the resident cats. It began as an attempt to insulate her during the ringworm threat and then when Norm and Simba were sick and I wasn't sure what was going on with them. Since then, I've made an effort to introduce Mama to the crew but... Have I mentioned that she's not particularly brave?

Mama loves, loves, loves people. All people, all ages, all sizes... if you have hands and are willing to pet her (or even if you just have legs that she can rub against), Clarice is your best friend. I'm not certain if it's the forward and blunt nature of my cats when meeting the new guys (Yes, you can take that the mean that Simba "sing songs" at her and Ruby prances right up to her and gives a quick hiss before moving on to play with her toys and Norm just completely ignores her while he rushes to her food bowl) or if she's just a bit shy, but Mama has shown absolutely no interest... zero, zilch, nada... in socializing with the other cats. If her door is open, she retreats underneath a piece of furniture and remains there until I close it. 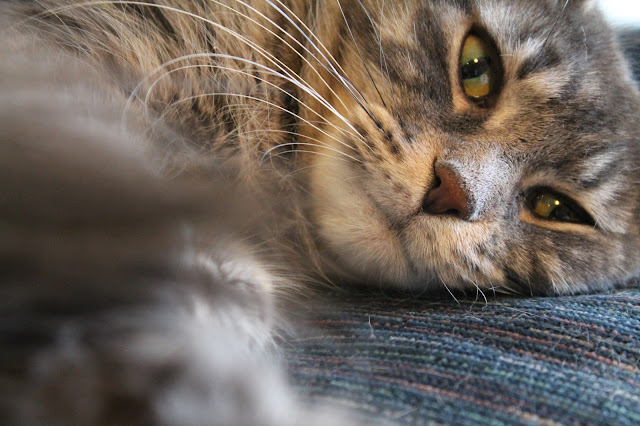 "There's nothing wrong with being careful with strangers. Did you SEE what happened the last time I met a strange cat???" 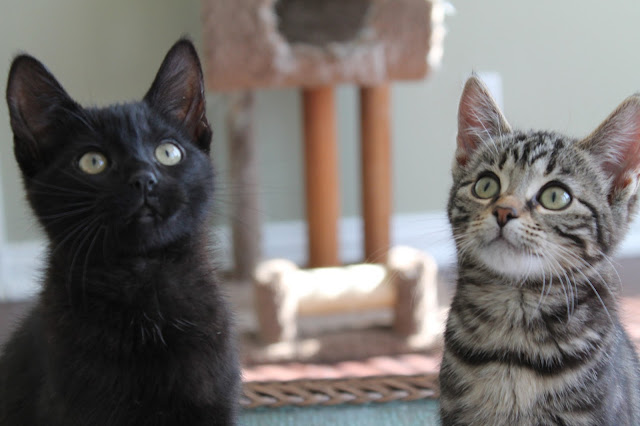 "She doesn't meet US does she?" 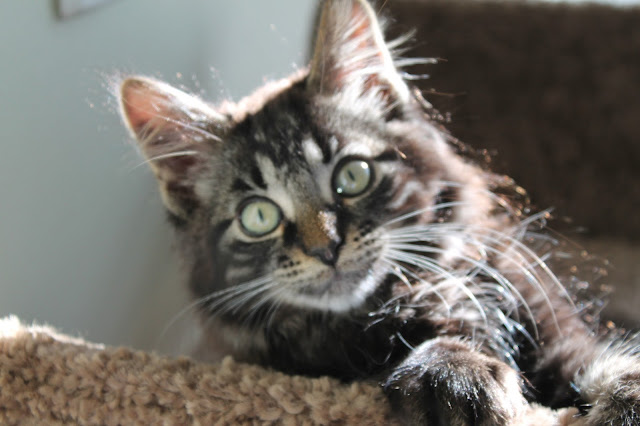 "Well, she certainly couldn't have meant ME!" 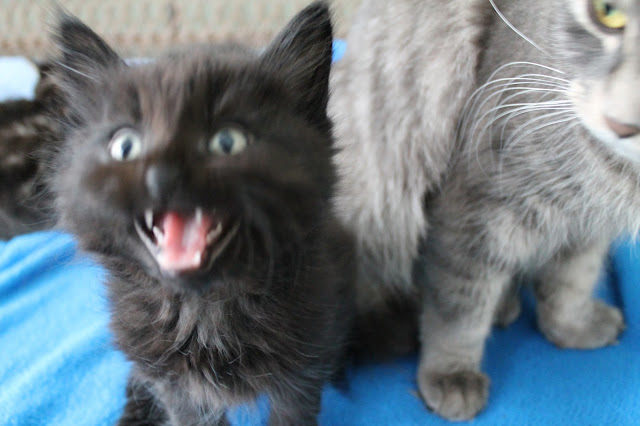 "Have you seen our daddy?"

Anyway, up until now, meeting the other cats didn't seem to be on Mama Clarice's agenda. I have been letting her make the decisions. It's all about her feeling comfortable.

Her room is "kid central"... television, dvd player, video games are all up there. Weekends are hopping. Sleepovers generally happen in there. But this weekend another kind of sleepover happened. Apparently one of the residents entered the room undetected on Saturday night and remained when the kids went to bed. 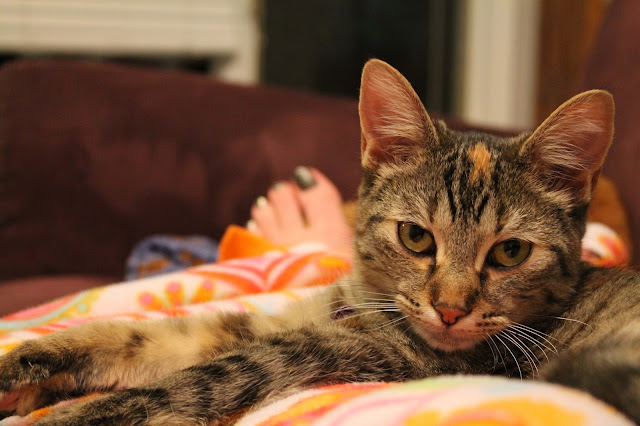 I woke up Sunday morning wondering where the Roo was. She wasn't sleeping on my legs as usual. She didn't arrive for breakfast as usual. She wasn't in any of her normal hiding places. As I called and called, I heard a meow coming from Mama's room... where they were both waiting for me at the door.

I imagine they got along. Neither seem the worse for wear. I always figured Mama would be just fine with other cats once she was in a situation where she HAD to deal with it. Perhaps now she will be braver when I open her door.

Adoption hours at the store were slow this weekend. The first sunny day in forever meant that very few people were out shopping on Saturday. The return of the monsoons kept them home on Sunday. Here's hoping next weekend is more productive for Mama Clarice.

While dropping Mama off at the store yesterday, I ran into a woman with a familiar face and a familiar voice. After chatting with her for a few minutes, I just had to ask... "Did you happen to adopt a kitten from us in November? A tabby boy named Lionel?" 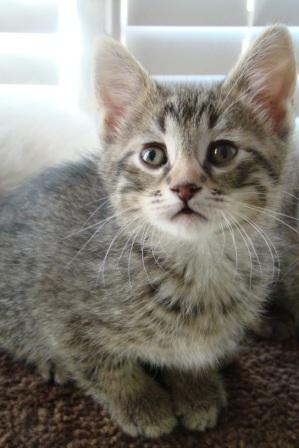 Little Lionel of the worried eyes? 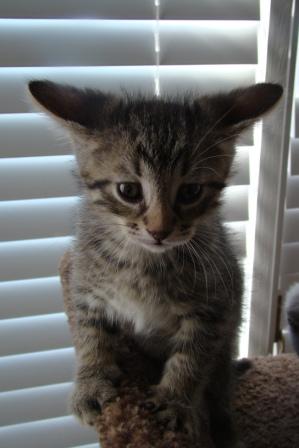 And the helicopter ears?

She was, indeed, our Lionel's mama. I'm happy to report that he's the light of her life, into everything, crazy pants, and her snuggle friend. His name is now Matty. 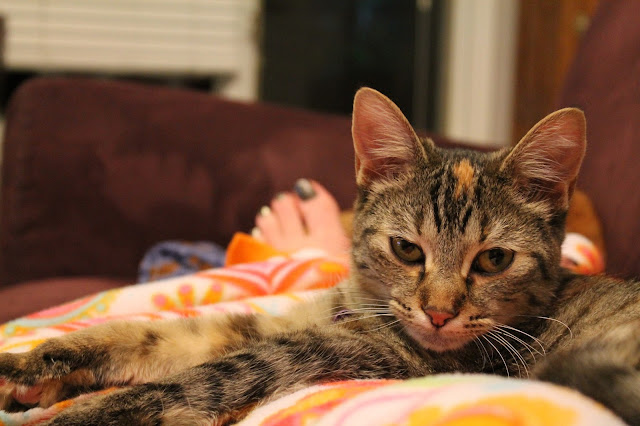 The Roo seemed unimpressed by the news of her big brother.

I have been besieged by spam over the weekend in the form of anonymous comments. Up until now, spam has been sporadic... a comment here and there, usually not more than one or two per day that were almost always caught by the spam filter. This weekend, though? Dozens upon dozens upon dozens of spam comments, and about half of them made it through. The most frustrating? "It seems that your blog ate my first comment, so I'm trying again..." before more spam, more re-directing links to their own blogs (which mostly don't exist).

I'd like to protect the blog from spam comments but I'd also like to keep commenting open here if I can. A few of our valued commenters around here use the "Anonymous" function but sign their names at the end. I don't want to make things difficult for them by turning off the option. But if it disappears, you know why.

And in the world of "You have GOT to be flipping kidding me", within five minutes of posting? An anonymous comment asking for blog advice (they generally start that way before asking to click a link). I know most spammers use bots for maximum efficiency, so it probably isn't particularly helpful to tell them to get a life... but they really, really should.