Okay... It seems as if every time I tell you what I'm planning for the next day's blog post, the universe intervenes in a BIG way and compels me to write about something else entirely.  Today was supposed to be Malibu's spotlight day, but I think you'll understand why the topic has changed for the day.  I hope she will too. 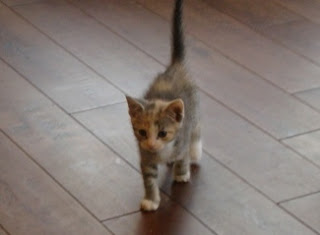 "I don't know, Lady.  This had better be good."
Thankfully our Malibu is pretty easy-going and willing to go with the flow.
These character traits were especially important when this happened... 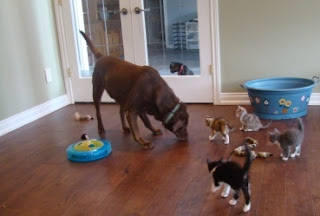 The Adams kittens had a visitor in the foster room Thursday morning.
From left to right: Charlie (duh), Shelby, Malibu, Hudson, and Bentley (in front)

I will interject here that I had grand dreams that Norman would take an interest in foster kittens. Perhaps taking on the role of Uncle Norman and patterning himself after the fabulous Charlene Butterbean.  Unfortunately, he seems to be committed to play the role of Uncle Norman as if he's a character in one of those Chevy Chase "Vacation" films.  He's there, but not particularly helpful.  The kids are good for one thing... food. 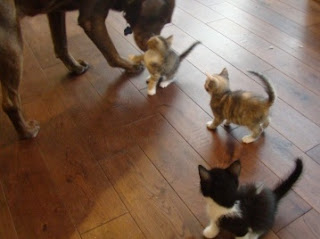 The kittens kept their Stranger Danger (TM) suits mostly packed away for the occasion. 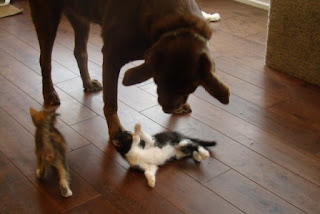 Because, seriously... Why would you need a floof suit when it's just Cousin Chuck? 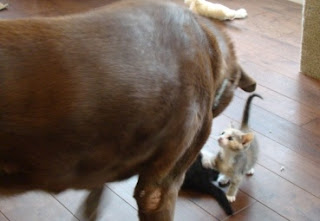 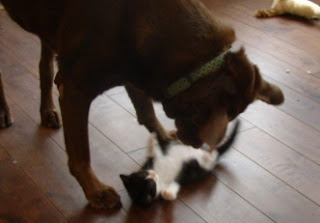 Chuckles inspected the kittens for cleanliness. 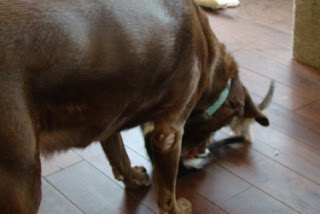 He cleaned them up when necessary.  Charlie tongue! 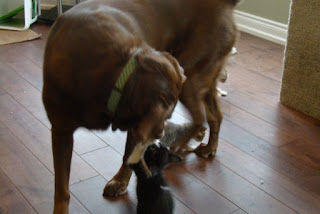 He let the kittens inspect him too... breath and toenails were especially important. 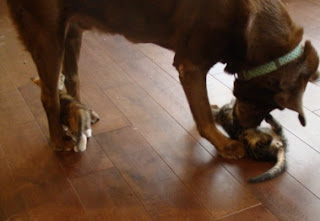 "When was the last time the Lady gave you a breath mint? Ewww." 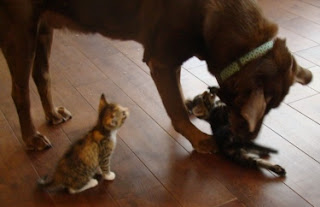 Cruz admired Charlie's collar while Shelby marveled at how tall he is. 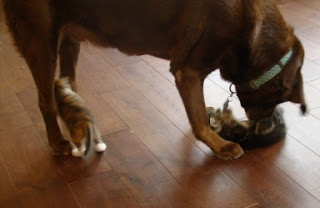 Kleptomaniac Cruzie tried to make off with Chuck's ID tag.
"HEY!!  It is very shiny and would coordinate beautifully with Cruzie's coat.  He just needs a collar.  WHY CAN'T CRUZIE HAVE A COLLAR?????" 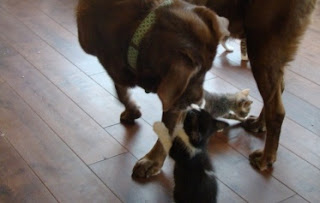 They told each other secrets.
"Don't tell Malibu, but Bentley thinks that he's the Lady's favorite." 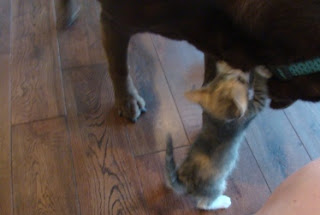 "Psst... Don't tell Bentley, but Malibu thinks that SHE's the Lady's favorite."
Charlie was kind enough to humor both of them. 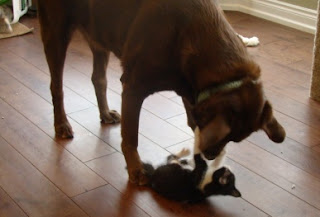 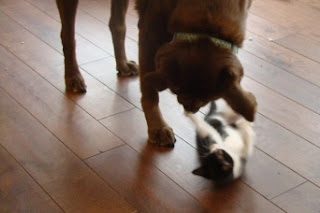 And when that game didn't work the way they envisioned, they switched it to "Boop Charlie's Nose" instead.

Bentley told whoppers of stories about the size of his latest mousie catch. 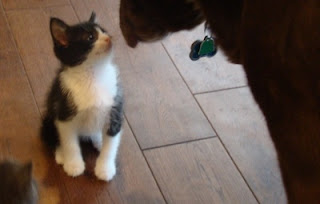 And Charlie pretended to believe him.  He was the perfect gentleman caller.

I will close out this portion of today's blog by mentioning that Charlie was truly the perfect gentleman.  He was gentle with his touches, careful with his foot placement, and tolerant of anything and everything the babies tried with him.  And I was never more than an arm's length away, just in case.

Something else interrupted Mally's photo op on Thursday.  Or should I say someone else... or a group of someone elses. 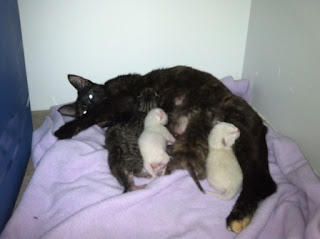 I was driving Clyde to Petco when I got a call about a tortie mama with five newborn kittens (3-day-old newborn kittens to be exact).  We're doing the overlapping litter thing again.  The  Adams kids are so healthy that we're anticipating being able to send them to Petco in two more weeks (when they are 8-weeks-old and can receive their next set of kitten shots).  The Jeffersons will be living in the upstairs bathroom until the foster room opens up. 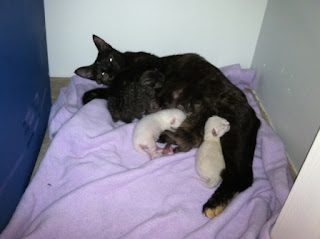 They don't seem to mind the accommodations. 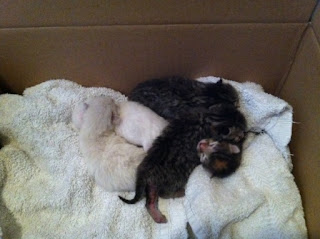 Five itty bitty babies... 3 tabby, 2 white.
Don't quote me on this later, but I'm pretty certain we have 2 boys and 3 girls.  I'll announce names next week when I'm more certain of what we have. 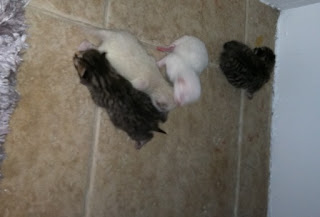 Mama moved them all out of the box and onto the tile floor in the bathroom linen closet.
She did accept a blanket later on (the one in the photos above).

Mama is exceptionally affectionate.  Purring all the time and seeking out attention.  I have to be careful coming in and out of the room.  She's been known to jump up to greet me and lets her nursing babies fall to the floor.  But she is a good mama who clearly loves her babies.  I can't wait to get to know them better.

Things I'm working on this weekend:

1.  More Norman photos
2.  A family shot of the Adams kittens

Have a wonderful weekend, everyone.