A Primer to Distinguishing Between Our Calico Sisters 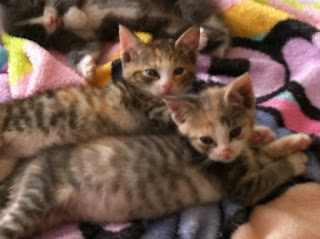 Starring: Shelby (back) and Malibu (front)
And that would be Hudson at the top of the frame, although he is neither calico nor a sister ;-)

I am blessed with two calico girls, who look a lot alike but have enough differences that I know who I'm talking to (most of the time).  The most obvious difference is their shading.  Malibu is a dilute, smoky calico while Shelby is a more standard calico. 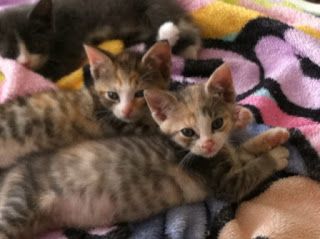 Both girls are wearing white socks on all four feet (something they have in common with two of their brothers... Cruz is the oddball with four brown socks).  They also both have pink noses on white faces, but Mally's is usually sporting a bit of breakfast crust to enhance her look.  She also neglects to "keep her whites so white" as standing in the food dish is still a habit. 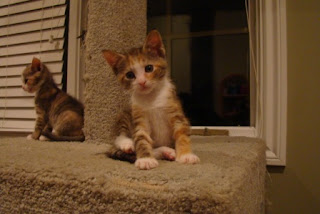 They love each other dearly, but generally only hang out together when sleepy.  Hudson is Malibu's partner in crime while Shelby spends time as a trouble-making trio with Bentley and Cruz. 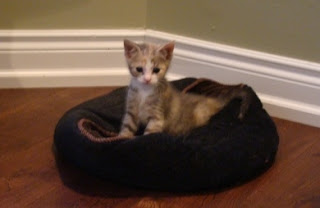 Malibu is our high-climbing, broom-chasing girl.  Quieter than her sister, but still unafraid to speak her mind. 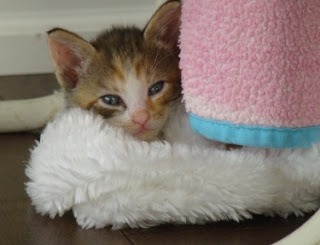 Shelby comes running with a story to tell whenever I enter the room.  I imagine she's telling my everything the boys have done to her since the last time I visited.  She's more likely to stop for purrs and snuggles than her sister.

Peekaboo, He Sees You 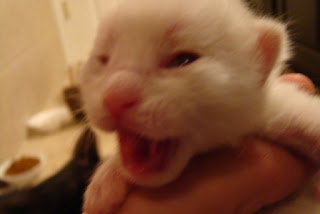 We have our first open eyeball.  Just one for now, thank you very much.  Clay's not sure that he likes what he sees right now either.

Florence looks like she'll be the next kitten to adopt the pirate squint.  Her eyelids seem to move a bit  more freely than the other kittens' eyes.

The Jefferson kittens at 1 week old.  Isabel keeps them on the floor of the bathroom linen closet right next to her litter box.  It's a bit dark back there and Mama does her best to block the action at times, but I think you get the idea of what our little family is like.

I apologize for not being a bit more detailed when explaining the newest babies' names.  I veered away from The Jeffersons themes with the names Clay and Willie Rae.  For those who don't know the characters, they are the very southern parents of Deputy Chief Brenda Leigh Johnson in the recently ended series The Closer.  They were played by the magnificent Barry Corbin and Frances Sternhagen.

Interestingly enough, when I did a Google search for an image of Clay and Willie Rae, my photo of Willie Rae from yesterday's blog post was one of the first results.  Hmmm......