*** Henry, Tika, and Abby are home.  All have upper respiratory, but Henry is a wheezy, sneezy mess.  He is grumpy and less than thrilled that I gave him medicine.  (Picture his face in the "Put Me Down" photo and you'll know what look me gave me at medicine time) At least it's only once per day. 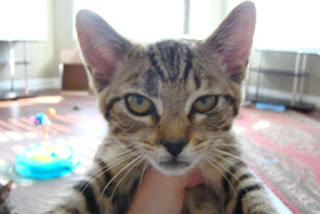 Okay... so I went and found the "Put Me Down" photo instead.  It was this look, except on a bigger face.  The boy is nearly 7 pounds now!

*** The girls were spayed on Wednesday and were running around the family room like maniacs less than 12 hours later.  I have pain meds to give them every two days, but they hardly seem like they will actually need it.  It is virtually impossible to tell the girls apart.  We've put a spot of green nail polish on Abby's ear, red on Tika's.  Except we can hardly remember which girl got which color... ;-)  They are feminine versions of Henry and I believe more and more that they are litter mates.

*** After vacuuming and flea treating my house twice a day for three days, I think we're about done (but whenever someone scratches, I tend to lose my marbles).  I haven't seen a crawler in over 24 hours.  Charlie, Norman, and Simba get a "just in case" dose of Capstar on Thursday followed by another crazy vacuum session.  At this point, I'm just holding out until a week from Friday when I can Frontline all of the adults again.  Just as long as the Adams don't get anything, I can stay sane.  They need to move to Petco on Saturday.

*** Mother Jefferson and the munchkins continue to do well and are unfazed by any of the craziness outside their bathroom door.  And today... while I wasn't looking... their ears boinged up to the top of their heads.  I am honestly too tired to walk back upstairs with a camera, but I will have take a photo tomorrow and have it for you on Monday.

I'm off now until Monday.  (I know I said that before, but I figured you would want the Henry report).  Everything is fine... unless I see an f-word.  Then I might be saying the f-word, a few hundred times or so.  ;-)
Posted by Kelly at 9:47 PM