Wimping Out on Wednesday

OK, I'll admit it.  The first day of school kicked my butt.  It wasn't so much that the 10th grader had to be up by 5:30 in order to catch her bus at 6:30.  Or that the 8th grader needed to be up at 6:30 to catch his bus at 7:30.  Or even that the 6th grader climbed out of bed at 7:30 to board her bus at 8:30.  It might have been the fact that one kid had a half day while her brother and sister had a full day of school.  Or that each one of them came home with a different school supply list than the one we shopped for last week, necessitating a trip to three stores along with a hundred other stressed out parents.  Or even that last night was the first soccer game of the season.  And let's not even get into the fact that I needed to squeeze in a trip to Petco and the vet, or that I'm not really sure what my kids ate for dinner on Tuesday...  Uncle. 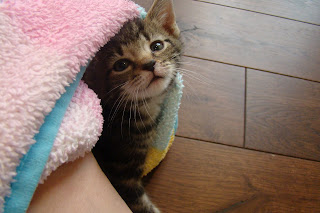 "Why so stressed, Lady?  You should just get under the blanket with Cruzie and chill for a while."

The original plan for today's blog post was for Womenfolk on Wednesday.  I think we'll postpone by a day and bring you Thursday with Two Tabby Sisters instead.

I will give you the update that I promised yesterday, though.  Our sweet Clyde might already be entertaining potential adoption offers.  A previous adopter from our rescue started asking around last weekend about a companion for her 2-year-old kitty boy.  She has a soft-spot for orange boys. We just happen to have a 2-year-old orange kitty boy.  You see how we're connecting the dots?

Clyde has been sequestered during most of his stay with us.  Truth be told, I really didn't want to stress out Simba for a short-term visit and Clyde is mellow enough not to really care whether he had the run of the house or a single room.  But we wanted to test Clyde with other cats to see how he would react to a potential brother.  Simba was not amused.

Please note that no kitties were harmed in the making of this video.

Simba has an interesting vocalization that he breaks out for newcomers... and will go on forever if he's not distracted.  No true aggression, no fighting, just singing.  Clyde's reaction was pretty much restricted to turning his back and ignoring the weirdo.  After he had enough, Clyde simply walked into my older daughter's room at the end of the hall, ducked under the bed, and took a nap.  I guess he passes the first test for being able to tolerate a kitty brother.  We're going to let him get to know Norman later today.

Henry, Porter, and Baz spent Tuesday night at the vet clinic and are on the surgical schedule for first thing Wednesday morning.  They will be moving back to Petco on Wednesday afternoon.  I decided it would probably be too much for Porter (and for me) to bring him home only to have to take him back.  I'm sure Eloise would prefer her brother come back to Petco and keep her company too.  I will have an update Thursday.