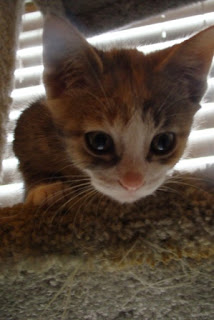 Princess Malibu of the Cat Tree 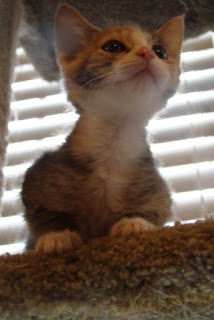 Shows off her dainty, slender neck 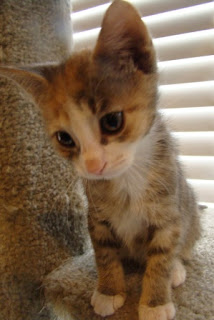 And her beautiful striped stockings with the long, white toes 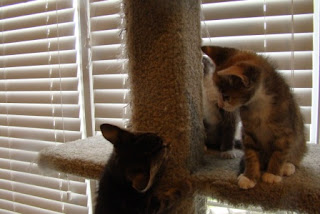 "AHEM... Did someone say 'Cruzie Monday'??  You just slither back down that post, Mister." 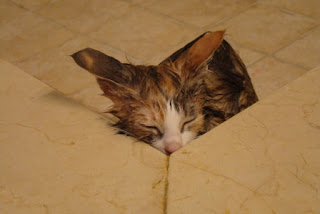 We found young fleas on the Adams kits again.  Much fewer numbers (I could count them on one hand), much weaker fleas, but fleas none-the-less.  I have not found them on the Jeffersons or the permanent residents, but I'm still frustrated.  Everyone got a bath with Pert Plus and an extending combing session.  We're back to the vet on Monday for their 8 week shots.  I'll demand a dose of Capstar for those who are big enough for it.

I'm also thinking of expanding the weapons in my repertoire.... Anyone out there have hints as to where I can find food-grade DE?  (Never mind, I found it online at Home Depot and my local store has 9 bags.  Guess who will be stopping by after physical therapy this morning?  If you know a cheaper/better source though, I'd love to hear about it)

This postpones our plans to shuffle the fosters around the house.  Mother Jefferson will stay in the bathroom instead of moving into the foster room while we get things under control.

ARRRRRRRRRRRRG!  I know fostering isn't supposed to be easy.  But can't it just be easy once?

My husband is gone this week and my kids are going non-stop as the fall sports season rumbles along.  If I disappear from the blog for a day or two, don't worry.  I haven't run away.  I've just contemplated it 46 more times than usual, that's all.

And upstairs in the bathroom... 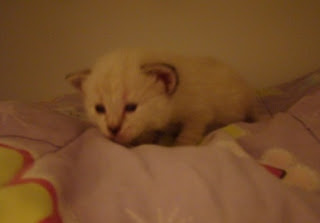 No trace of fleas (hallelujah!) 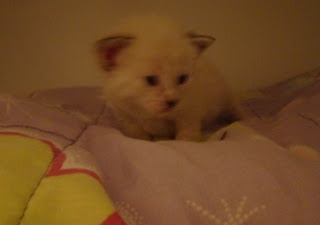 But we do have ears starting to move 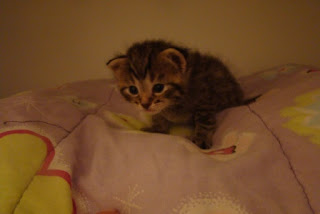 On kittens who are starting to move 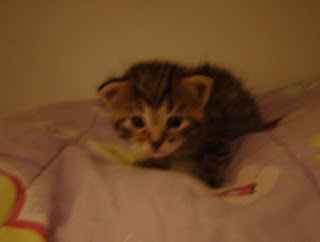 And would like to be out of the linen closet, thank you very much.
Just ask Lionel.

Mother Jefferson is doing a wonderful job raising her babies.  They are fat and happy and apparently pest-free.  The changes from day-to-day are dramatic.  Over the weekend, the kittens went from mewing little blobs who were only interested in eating and sleeping to curious little creatures who want to know what's going on whenever I enter their room.  They crowd the "gate" (otherwise known as the side of a produce crate) and peer over the top to see me.  It's awesome.

The first sibling-on-sibling wrestling matches have occurred, although it's hard to get an all-out three ring circus going in a linen closet.

Also, there's real blue in their eyes and I can see the differentiation between the pupil and the iris of their eyes.  It's like they've graduated from five baby furballs to five real, live kittens.

Monday is their 3-week birthday.  Hard to believe they've been with us for so long.

QUICK UPDATE (With a longer, more detailed one promised for tomorrow)

I received word this afternoon that Eloise and Porter were adopted over the weekend!!!  Not together, as I would have preferred, but both to fabulous homes.  I couldn't have wished better for either of them, knowing how it ended up for them.  I'll have the in-depth report on Tuesday.