I mentioned yesterday that Willie Rae and I have been discussing her lack of "star time" on the blog.  We intended to rectify that situation for today's post, but in doing so we learned one very important thing.  Willie Rae lacks quality "star time" on the blog because Willie Rae does.not.sit.still.  She's a blur in almost every photograph, moving as soon as every shot gets focused or choosing to wait until I put the camera down before she comes out from under or inside whatever she is investigating at the moment.   She's the Greta Garbo of the foster room.  ((Actually she doesn't want to be alone, she just doesn't want you taking her picture.  Perhaps this makes her the Sean Penn of the foster room??  Nah... she won't beat you up for taking pictures either.  I'll keep working on the analogy and get back to you.)) 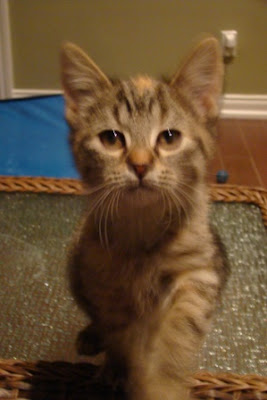 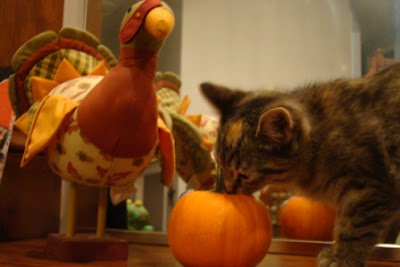 Here, she investigates the pumpkin on the mantel.  She might be wondering what happened to the feathers that were once on the pumpkin.  She might consider asking her brother that question. 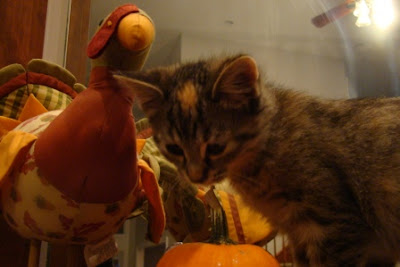 And now she's investigating her options for getting off the mantel.  This would be when I put down the camera.  Our girl is the master of jumping and falling from places that I wish she wouldn't.  She routinely climbs up onto my shoulder and makes the jump to the floor. 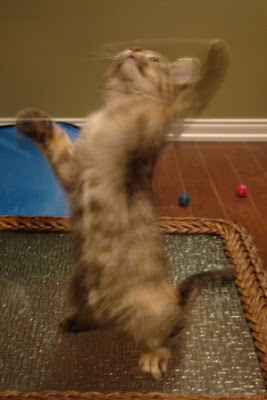 Willie Rae has always been playful, but since Clay was adopted she has become extra bouncy and trouble-making Lionel's partner in crime ((As if he has a choice... she's the only sibling left)).
Here she is on the table, waving at the feather teaser.  I'm kicking myself that the picture of her falling backwards off the table while chasing said feather teaser did not turn out.  Don't worry... she landed on her feet ((as she did when she was chasing her tail on the table just a few minutes later)).  Perhaps we could compare Willie Rae to one of the Stooges instead. 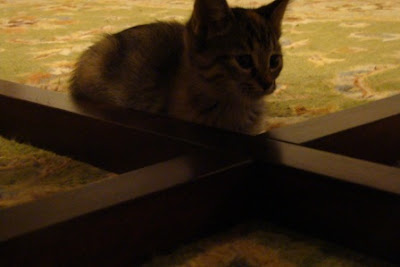 Willie Rae is a fan of enclosed spaces... underneath the coffee table, underneath the chair, inside the cat condo, any place that gives her a good vantage point to see what her brother it up to without exposing herself to the dog.  And speaking of the dog...
Willie Rae was racing up and down the stairs like a maniac, so I decided to grab the camera to document it for you.  She decided to change up the game plan, but gave you a show none-the-less. I only wish I had the right angle to get the flip at the bottom of the stairs (where she again landed on her feet).  Listen carefully for her reaction to finding Charlie there. 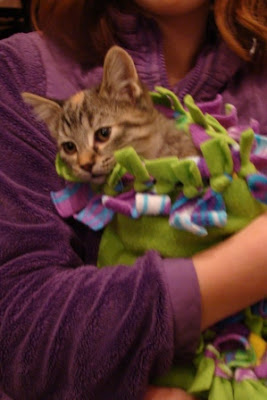 We've decided that photographing Willie Rae is infinitely easier when she's bundled up... 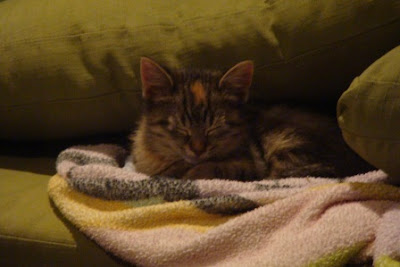 Or sleeping.  But we'll keep trying.  Maybe Tabbies on Thursday??

A Bonus Video For You

Clay and Willie Rae together on the night before he was adopted.
You might want to turn down your volume unless you want to hear an 11-year-old girl squealing about how cute they are. 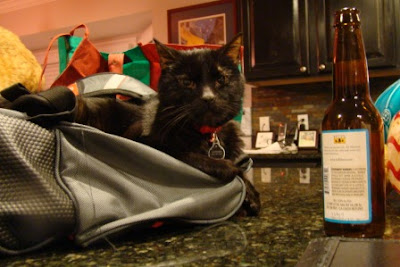 If you give a cat your backpack, he'll want a beer while he's doing your homework.
Don't even ask what he wants next.  Let's just say his life on the street wasn't pretty.
He's way wilder than the mouse who wants a cookie.

PS--- The wound above his eye was courtesy of  Mother Jefferson, who was WAY too overprotective of her babies at the moment... a moment when Norman was no where near them.  She is on her way to get spayed shortly.  I'm hoping we can avoid future incidents while she is here.