We spent the weekend catching up with our friends at the rescue and making plans for the adoptions that are on our horizon.  Yep... everyone in our house is considered "adoptable" at this point.  That does not mean, however, that they are packing their bags to leave this week.

((Are Not Quite Ready to Move on Up, Thank You Very Much))

I was asked to upload our Jefferson family to Petfinder over the weekend, which I suppose makes them "adoptable" because they are now being advertised.  None are medically cleared to leave yet, though.... 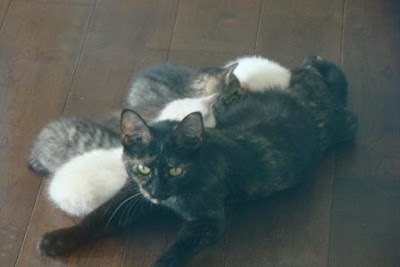 Our Mama will be spayed before she leaves us.  I haven't even made the appointment yet.  I imagine it will be another week or two before I do so.  We would like a little bit of time to pamper her and fatten her up (and give her the extra love she so richly deserves for doing such a fantastic job of raising her babies) 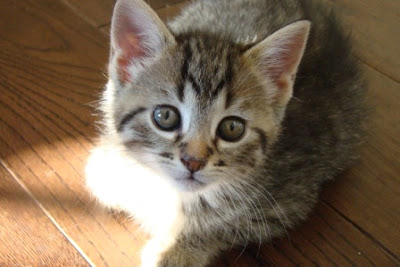 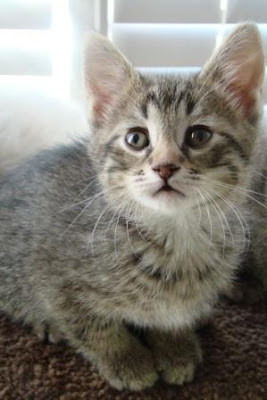 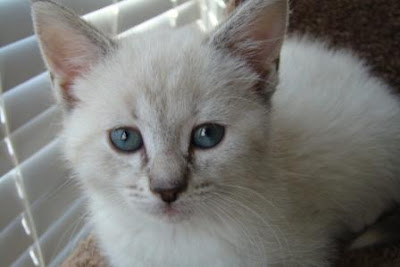 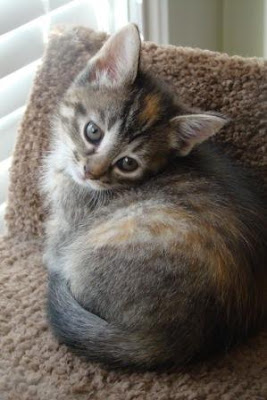 and Willie Rae are all on Petfinder as "adoptable", but they will still need to visit the vet for a health check and vaccinations before they will be allowed to leave.  Our rescue also prefers to keep our young ones until they are 10 weeks old at an absolute minimum... they aren't yet for another week (remember absolute minimum?  I'm bucking to keep them out of adoption weekend events for another 2 weeks at least) 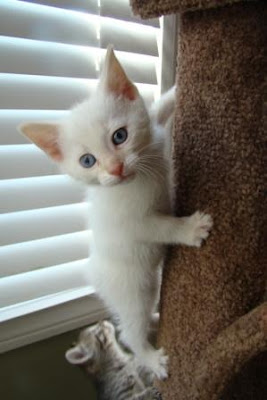 Someone else has a Petfinder profile, but he's currently listed as being "on hold".  I want him.  My husband is resisting.  I see his point... we already have two cats and a dog.  But I love him in a way I can't quite explain.  And I feel ridiculously guilty for not having that same drive to keep the others (who I also love beyond all measure of reason).  I have another problem too...

What do we name him?

I feel confident that Clay is not his forever name.  We (the kids and I, because remember the husband isn't playing yet) are kicking around others that fit him and fit our family.  The short list includes Neville, Nigel, Leo, and Lionel (I know, right?  How confusing would that be??)  Feel free to leave your suggestions in the comments.

The babies went online late, late Saturday night.  By Sunday morning, we already had received an e-mail expressing interest in adopting our Flo.  I'm not ready for this... but I will give her happily to a family who will love her forever as much as I do now.

On Thursday... after her vaccinations. 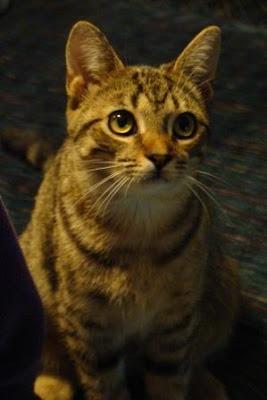 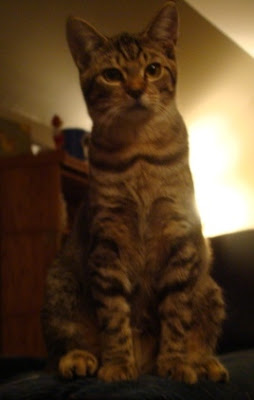 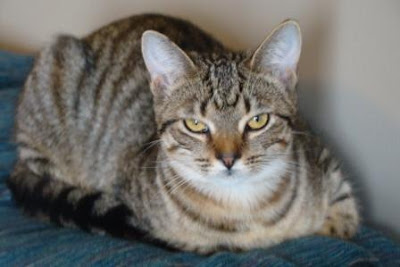 Which one is which?

Henry, Abby, and Tika are healing nicely and almost ready to return to Petco... with a couple of caveats.  The first is that our vet needs to clear them medically, which can happen no earlier than Friday.  The second is that Petco needs to be cleared medically as well.  Why, you ask?

Well... the dreaded r-word disease reared it's ugly head again in the condos at Petco of all places.  When Henry, Abby, and Tika returned to me with upper respiratory issues we closed the Petco condos because it had also become contaminated with our friend/foe ringworm.  Three kittens were removed who were diagnosed with ringworm.  We closed it down for over a week, with cleaners scrubbing and sterilizing daily for over a week before more kittens moved back in.  And... it came back again after the rescue opened the condos.  For a second time it has been shut completely down and will need to go through a major sterilization schedule before we can allow anyone else to move inside.

The r-word invaded my house again, too.  About a week after Henry, Abby, and Tika moved in one of them came down with it.  Remember how I was looking for an alternate foster for Tika but couldn't find an open space?  She brought a mild ringworm case with her from the condos.  She started healing and re-growing her fur within a few days of being on the meds.  Knowing what to look for, I caught it the very first day she showed symptoms which kept it from attacking full force.  Today, you can't see a single sign of it on her beautiful face.  We need a vet to verify it's gone before our three can move out of here, though.

Henry and Abby had already fought their battles with the r-word as younger kittens and, while still technically able to catch it, had built enough immunity to keep from breaking out in spots.  Neither have shown a single sign of it during their month here.  Their upper respiratory is gone, but they will need to pass the black light exam before they can be adopted.

And here's where I'll reveal one more piece of information... the thing that took our Malibu Adams away?  Yep, the r-word.  She was with us when Henry, Tika, and Abby moved in and that's when we believe the cross contamination occurred (and now you know why I lost my mind that weekend and was ready to quit the whole foster game).  Her current foster mom says our Mally girl is ready for a re-check and might be up for adoption in another week or so.  I can't wait to squeeze the stuffing out of her.  I also hear she's so much bigger than I remember... sigh. 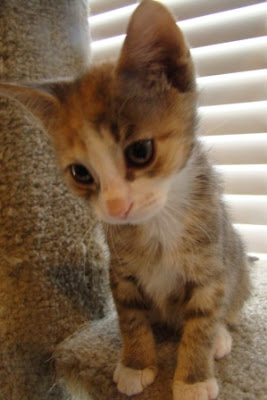 I'll be certain to get you an updated photo as soon as I see her again.

And Speaking of Mally...

I met her four of her brothers on Saturday.  You'll remember that our Adams kittens were actually five of a litter of thirteen kittens born to one super-tired mama kitty.  Born during the annual "Woodward Dream Cruise", all of our babies were named after cars.  Hence, we had Bentley, Hudson, Cruz, Shelby, and Malibu.  After losing one, our five came to me and our rescue director Paula raised the others.  Well, the others are entering the adoption market...

Sister Chevelle, a teeny tiny calico princess who was ever so much teenier and tinier than our Shelby and Mally, was quickly adopted before she ever hit Petfinder.

Brothers Monte Carlo and "Peeps" McQueen (named after Lightning McQueen and his refusal to pipe down) have also been adopted "lightning" fast. 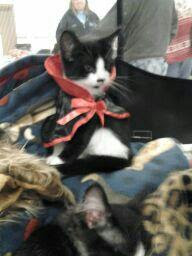 Count Monte Carlo at the adoption expo the weekend before last.  He's Bentley with a black splotch on his nose! 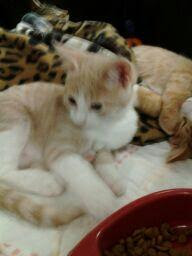 Little Peeps McQueen at the same expo.  I bottle-fed this munchkin months ago (along with Chevelle).  The tiniest one of the bunch is packing up to go to his forever home.

But on Saturday, these four made their initial foray to adoption fairs... 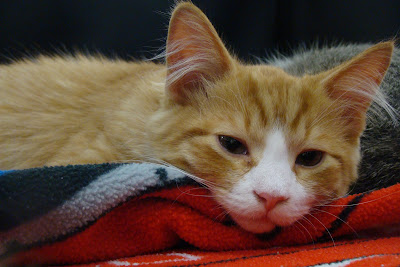 Cooper (who isn't quite so "mini" any longer) 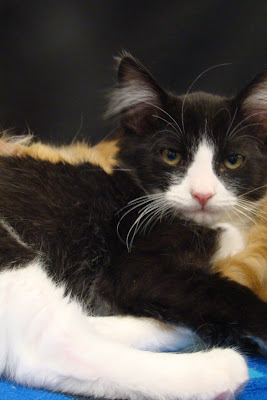 IROC (who has his brother Bentley's tuxie colors, but in person reminded me so much of Hudson) 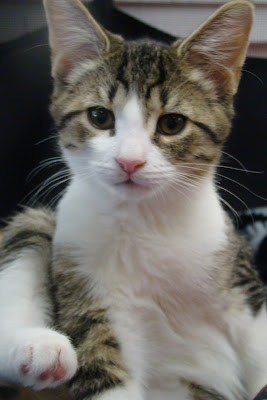 Lincoln (who has a face that reminds me of Shelby... not sure why) 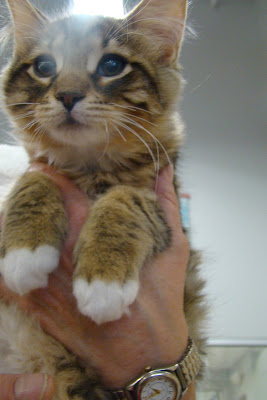 And Woodward... a fluffy gentleman who has already snagged himself a new home. 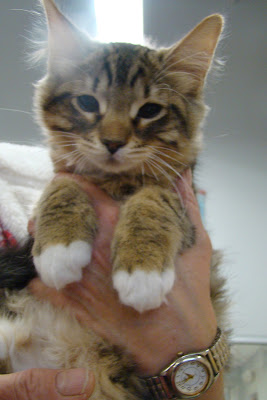 Yes, he knows exactly how special he is. 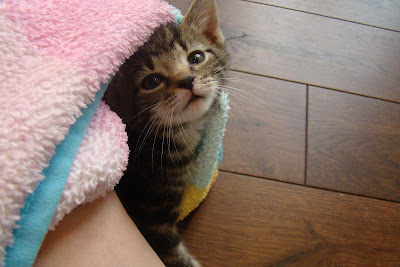 Brother Cruz is heading back to the adoption circuit soon too.  He caught an upper respiratory and needed to spend some time in another foster home (couldn't come back here with my upper respiratory kits because of the r-word which frustrated me to tears at the time).  He will probably be available again around the same time Mally returns.

Sigh... it's been a rough fall for the teeny tiny tabbies (and their foster mom)

The news is all good from here on out.
It has to be.

If you wish to check out our rescue's Petfinder listings, you can find them at this link.

If you would "like" or "share" any of the kittens you love (especially if you happen to be near or have friends in Michigan), we would greatly appreciate the exposure for our kitties.

We got calls from Canada looking to adopt Hudson just last week.
Needless to say, we updated his Petfinder profile to say "Adopted".  But we would be happy to entertain long distance adoption ideas for the rest of them too ;-)